You collect Willis and the "Eye Slob"...maybe you should give it a real name soon...just outside the cafe, thankfully where you left them this time. The trek back to your office is uneventful, and you wonder if the dolphin's presence is keeping any other monsters and weirdos at bay for now. At least, if that's the case, you know they can't be anything worse than the dolphin itself. 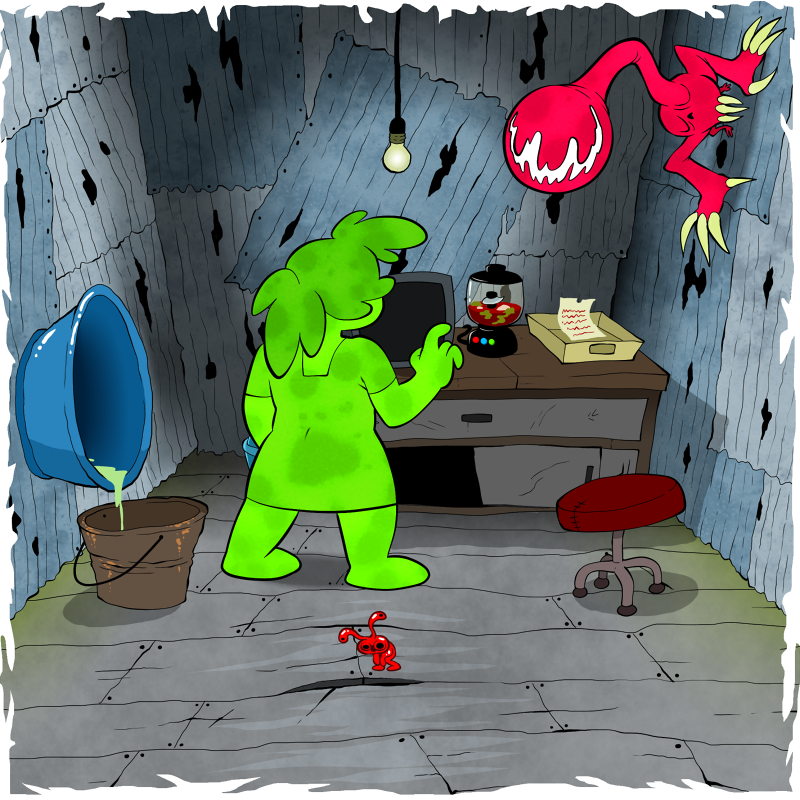 You plug one end of your extension cord into the same outlet as the broken monitor. The monitor did fizzle and pop when you tried to turn it on, so there must still be an electric current, right?

Sure enough, its buttons begin to glow once connected to the other end of the cord.

Now to decide what to blend together...

You're not sure if the medicine you found is that good an idea here. You think you heard a stray voice or two positing that it would only make the dolphin throw up the poison too quickly. That seems sound.

You dump the bacterial froth into the blender, trying not to breathe in.

You add the meat-slurry to the froth, and do your best not to gag.

You activate the blender on its highest setting, and watch the revolting mess become a deep brown, bubbling froth.

This smells like you imagine a septic tank would if the whole family only ate expired dog food. Would even something as abominable as a dolphin find this palatable?

>RECYCLE WHILE YOU'RE HERE

You've recovered a couple of possibly dead staff members, or patients, or who knows what. You'll find out soon enough, you suppose.

Fortunately not moving. It looks very dried out and brittle.

Looks like the hose that connects a gas tank to a patient.