>Chat With Your Fellow Human(?) 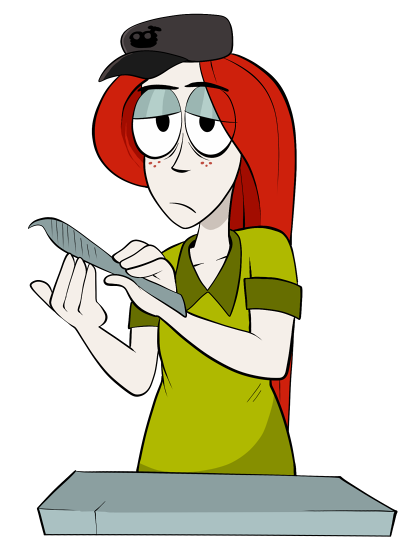 W-wait - what was that? - What happened to "home?" Are we from the same home? The one with Paris and Christmas and koala bears and Wal-Marts??

...I don't know. Isn't time a lie or something? I just sort of woke up here. Last I remember home was pretty much like it always was.

Okay, eesh. I'm uh, real sorry, Planet Earth or Grey World or whatever it's called is sssorta, well...how should I put this...

You already "put it" as an exploding noise. Just tell me.

Right, right. Uh...well, it's...it's kind of one big ball of monsters right now. Everybody who could see it happening either hecked off to some other zone or went full John Carpenter trying to stick it through. Wild.

You seem pretty chill yourself, all things considered.

Sure, I guess. It was a lot to take in when little me first found out every dinosaur was dead. Lot to take in when I found out where babies came from or that I wasn't like everybody else or coming in to work every day to find it slipping further into some wackadoo fantasy universe.

Sure it sucks that the whole world went even further down the toilet than it already was, but it sure does recontextualize the place when you find out how much more pointless bullshit is actually out here.

Admittedly, you haven't been that close to yours since he was born. At least mom and dad were already gone before any of this stuff...

I moved as far away as I could by nineteen, and if I knew I could just blur my eyes and see some whole other moderately less terrible world instead, I'd have done it by nine.

*Cough* but, I mean, that's just me. I'm...ssssorry stuff is bad. But, hey, the doctor things talk about it like they can fix it. If we don't understand how things got screwed, then we don't know for sure they can't be unscrewed, right?

I really don't want to be a bother, but, could we talk a bit more? I've gotten so many different perspectives on all this "zonal" junk, but not a lot of it from someone normal.

Go ahead, not like I have much else to do.

You said only some people could see the weird stuff, and work just sort of...turned into this place? Do you remember much else?

Oh, I remember pretty much all of it. Must have started two, maybe three years ago? B/[]G''RRR K]}NG was the first to change, sorry, that happens every time I say it, but so did every other chain, eventually. Under the surface of our zone they're all just tendrils off the same thing...except WWW||||D''@S, no idea why, they stayed the same to the end.

Apparently that's just how it is. Everything that exists is a "branch" off of something, except us, usually, but it's always been a thing for some people to start "branchifying" for whatever reason and see things how they really are. Guess I just got lucky. They've even got whole social media sites for the branchitized, though not many people use them. Guess they're too busy getting eaten alive by talking cars or having unwholesome amounts of fun in the Candy Dungeons to care about the internet anymore.

Anyway I got about a year and a half into serving invisible monster food and pretty used to weird crap before it really hit the fan. Nobody left online knew why, it's like a lot of little cracks in our zone finally caved in, or something. Pandemonium. Goldfish storms and singing trees and literal sock puppet people, too many zones leaking in all at once through our proverbial roof, and then those monster things, like what they're grinding up in the back or that big eyeball thing that came in with you.

...Kinda? It's been following me everywhere and it's only hurt anything that tries to kill us. I guess it's like a weird dog.

Cool, cool. Yeah, some of them are alright, but after a while it was easy to figure out what as happening. Nobody was dying anymore. Anyone who should have died just flipped out into a gore monster and kept going. You know how many people die on a normal day? And with how violent the things got, and how many people couldn't even see one while it cracked their head open and sucked their eyes out...

Sorry, sorry. My bad. You get the idea, though. It escalated preeeeetty fast. Eventually they were just kinda growing in one big, sloppy mess. It was like ground beef kudzu.

I'm prrrreeeetty sure work doesn't have anything to do with it, even if they did start marketing the stuff as "INCREDIBLE MEAT 2." Great to know magical fantasy realms are still made entirely of capitalism, huh?

Yeah, I don't eat anything they make here, but the ghoulies grow back from just about anything as long as they're given enough "layers" to do it. Whatever they cut off and serve up seems harmless so far, juuuust so long as they actually cook it first.

Anticlimactic, huh? Our apocalypse is just someone else's salmonella.

Still amazed you can stand working here, though. I'd be creeped, to say the least. You haven't met a big, weird, burger monster have you? Or the steamer woman? Pressure cooker? I forget.

Oh, I have. Definitely freaky. But, still feels more ethical than pumping gas for Chevron was. Everyone's a gear in someone's doomsday machine, aren't they?

...Say, can I ask if you know anything about some kind of "parliament of flesh?"

Can't say I do. If they named themselves, they already sound exhausting.

You don't know the half of it...and I still don't either, but from what little I can gather, I think this is their fault.

Well, feel free to swing by whenever you need, I can keep you posted if I hear anything...and if you actually want anything they're calling "food" around here, for whatever reason, I'm not judging, it's on me.

As a matter of fact, we uh, have a dolphin we need to feed. It's a long story. Weird story.

In case you haven't noticed, so is every story. If by "dolphin" you really mean one of those squeaky fish-posers, we do have the seafood special, and it's surprisingly normal seafood, all things considered. I mean, they pick it off a tree, but it sure smells like the real deal. Badly.

Yep...it's a pile of seafood alright. Stinky, slimy, you never were the biggest fan, personally.

Thank you, uh, you. Are you sure I can't call you anything? A nickname?

Heh. Well, it's complicated. I was gonna take my mom's name just because she'd hate that, but it doesn't seem as worth it when she's probably some kind of meat spider by now.

Don't be. If she knew how I'd turn out she'd have just left me at the hospital.

You know what, I liked "miss." Let's just go with that.