Both slobs regard one another passively. You...not the Eyeslob, or Fern, but YOU, READERS, feel a strange sensation, as though your brains were previously tightly closed containers, and the seal has just been broken... 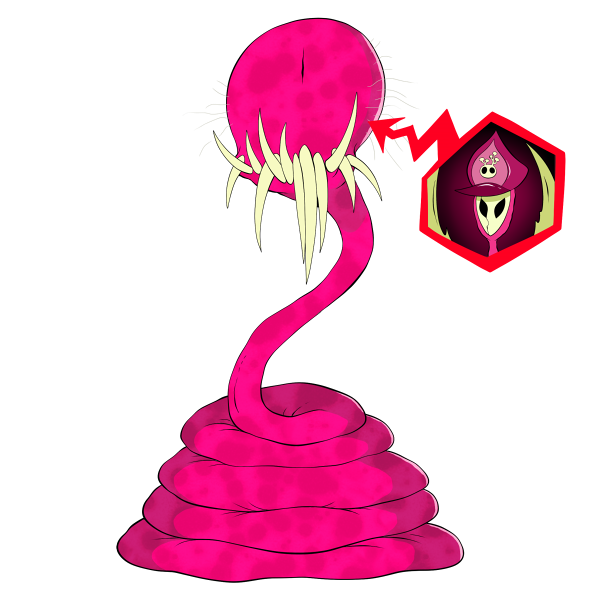 ...We are QUEEN DOCTOR STAPHELIA, Captains of the vessel now designated FRN-1! We were not previously aware of any J-series vessels occupied by rational bioforms, nor any other FRN-series capable of external interactivity!

Please verify peaceful intention or submit to termination and absorbtion by a superior force! Thank you!

Fern...? FERN?! Oh, goodness! What are you all doing in that then?! We'd better hear that Fern is an extant concept, and it had better not be your fault if she's not.

>Uh, well, she kind of took a spill in our last battle, and somehow we were transferred to EYESLOB here. He's special! Please don't eat him! We're pretty sure Fern has spawned again in her hospital room, but we're a little sidetracked right now.

Oh, dear, well...if you think there's anything we can do, we certainly owe her a great debt. We never would have forged our unified MYCOBACTERIAL EMPIRE without her to inspire my brilliance!

>Do tell. What is all this? What have you been up to??

Oh, this and that we suppose. Colonizing biovessels, perpetuating our empire from the grey to the omnichromatic...

It's only quite recently that we have at last achieved motor control over the entity you're apparently calling a "nekkslub," but we refer to as FRN-1, or the outer housing flesh of subzone MG-0908-BN/SK/HL-3900438093990! NEVER BEFORE have the inhabitants of a zone held such power over its external manifestoid! Our very world is but our puppet! We are unto GODS! GODS, WE TELL YOU!

>Awesome but WAIT A MINUTE, WHERE THE HECK IS MAGGIE?!?!?

Oh, don't worry, the old gal is doing quite well for herself...perhaps you've heard of The Writhenating? No? Really? Must still be a microbioid thing...

She's a bit busy with all those acolytes and cenobites and prophecies and sacrifices and whatnot to spend too many layers with us anymore, but we're happy she's happy...and we're lucky she's on our side!

>Uhhh okay so...how did you end up here? Did Harmburger chop up your vessel like this!?

We do seem to have taken a wrong turn, or rather, overshot a zone we were certain was supposed to be quite a bit bigger.

Our agreement with The Recombinators designates vacated, acognitive biovessels for sustainable harvesting, and our little navigational error appears to have sorted us in with the D-stock. This Handbargle character seems to be all Butcher First, Talk Later...or perhaps it's really only you, thus far, who can perceive our broadcast. You know how it is with experimental tech.

Troubling, though...it's not the first layer we've attempted a zonal shift and found a sort of...gap.

Indeed. At an increasing rate, we have attempted zonal shift and nearly stepped out into nothing - into the abyssal non-zone.

We believed it was miscalculation at first, our capabilities still in a prototypical state as it were, but we are not the only entities we have encountered who report this problem.

>...Can you hear us when we say "The Parliament of Old Flesh?"

"Old Flesh," you say? Yes, we're receiving that well enough. Our Staphy half is feeling mildly nauseous processing the concept, but we would both like you to continue.

>OKAY, this thing called the Parliament seems to be responsible for a lot of what's been going on. The sickness afflicting Fern's baby, the degradation of the Hospital, the mutations afflicting grey-zone biovessels like FRN-1 and our Eyeslob, and quite possibly these missing zones. We believe they are fragments of something that no longer exists, and they desire to rejoin everything into a single form.

What you describe aligns neatly with our research thus far, though we had yet to identify a singular culprit. We believe these entities to have in part facilitated the merger between The Morgue and The Recombinators, which as you know has been of significant benefit to our empire, but whether our prosperity was an intended consequence on their part has yet to be seen.

>What IS this merger all about? Are you aware that Balmer is working with them?

Of course. Technically speaking, he answers to us after The Morgue's restructuration. We hear he "flips a pretty mean 'burg" as the tourists have been saying!

Our arrangement is quite elegant. While the Red Blight appears to perpetuate of its own accord, we of the Mycobacterial Empire possess means to target specific zones with new infect-o-waves. Converted biomass is considered our exclusive jurisdiction, but we permit The Recombinators to harvest and process this resource in exchange for the use of their interzonal channels.

They are very adept at zonal infiltration and membrane penetration.

You could say that, with their help, we have become one of the most formidable contagious mechanisms in the perception range, second only to whomever is responsible for the rest of the blight's spread...more than likely this Parliament of yours.

>Uh...can you tell us a bit more about that?

Oh, certainly, our Staphy half is most eager for us to wax Blightology! Perhaps you recall the contaminant we uncovered, the Exvironator? The thing that merged the metal idiot with a hideous dolphin?

We remain regrettably uncertain as to the exvironator's origins, but we have thoroughly documented the nature of its effects.

You're familiar with the concept of a virus, I take it? A biological entity consisting of very little more than a parasitic, self-perpetuating biocode, or "jeans" as they are sometimes known.

The principle here is quite similar, but what we are dealing with is a parasitic, self-perpetuating conceptual algorithm. It converts the biological material of the host to its own encoded material on the basic conceptual level, overlaying the idea of the subject flesh with the idea of something else's flesh, which must be what these folks mean by this "old" flesh, yes?

Now, this is only a hypothesis on our own part, but we believe the continual regrowth and adaptability of the resulting bioforms, the vessels that you're calling "slubs," may be due entirely to the sheer vastness of this infectious concept. Hosts become, essentially, points at which this original bioform, this "old flesh," can "leak" back into existence. Destroy their flesh, and more of this lost concept simply flows back into reality to replace it.

In even simpler terms, the "old flesh" was once something very, very big, and then it was gone, but now it is returning to reality in a highly infectious form, with infectees themselves functioning as the "holes" through which this old, big, gone thing is pouring back into reality.

Thus far, most contaminated populations are fortunate that the infection typically takes hold only in a post-mortem vessel, and the Recombinators are fortunate that simple application of extreme heat renders the reconceptualized flesh as inert as any other meat, otherwise their customers might all have been reduced to beings rather....erm....not....quite civilized enough to know how to order from a menu. No offense, Ayeslub.