>GRILL THIS JERK ABOUT THE PARLIAMENT 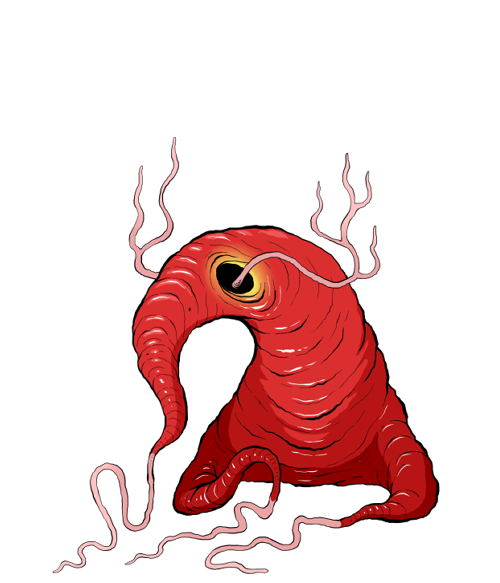 As we were saying, then...what do you know about the Parliament?

They're moron remnants of the Old Flesh. The original concept.

I know that. What was the "old flesh?"

Just what it sounds like, flabby. A singular organic mass. We, I, was alone and content in a peaceful bliss...and then it all went to shit.

And that's you. The shit. You're the shit that it went to.

You sure don't seem to have a lot of faith in your friends, though. Doesn't sound like they're exactly one big, happy family.

An understatement. Virtually every strain has their own ideas. How they ever managed to settle on this plan is anyone's guess.

Hang on. Every "strain?" Just what are you fellers now, physically speakin'?

Sighh. Before it diverged further into the sickly messes you call your lives, the original flesh had already diversified into countless derivative tissues. Each of us are what remains of a single tissue type...more basal, conceptually, than even the Organoids you call your patients. I suppose, in an obscene way, you could consider those hideous entities to be - gag - conceptual "children" of the original flesh, whereas multi-organ, multi-tissue systems like your constituent arthropoda and your sweaty friend there are effectively our - hhhggg - not-so-great grandchildren.

Uh-huh. Fascinating. How are you blocking the Hospital staff from this stuff? Why can't they seem to grasp that you even exist?

Hmph. As if they'd let me in on anything interesting. Near as I can GUESS, they probably tampered with the Hospital's priority algorithms.

We got a lot to deal with around here, and we can't afford 'ta waste perception on folks what ain't got nothin' wrong with 'em or any kinda formal business with us. It's a safeguard, so we give our care ta' whoever needs it the most, y'know? Can't have folks just cryin' to us every time they want some cutie nurse's attention.

But, gosh, any kinda threat to us oughta qualify as purdy dern relevant. For the Parlyment ta' qualify as AZP - Absolute Zero Priority - heck, that'd have ta' mean their presence somehow ain't recanized as detrymental ta' the Hospital's operation and they ain't qualify as unhealthy on posilutely any level, in any continuity, by any defynition.

An' that REALLY ain't possible. Everybody's at least got a papercut scabbin' over on some layer or another.

So...that ain't answer our question at all. Ain't the foggiest idea how they coulda pulled this one off.

Eugh. Are you joking? They're the very poster children of the Parliament's end goal.

Of course they did. The remnants of the Old Flesh were an even more chaotic mess before someone got the bright idea to Reclaim our Wholeness.

Plenty of us strains preferred to keep on stewing, naturally. We were all quite accustomed to wallowing, you must understand...squelching in the darkness between darkness... roiling with indescribable contempt for the whole of reality...something had to know Hatred of All Things on a hyperprimordial level, didn't it? And how could we go on Hating All Things without all those wretched, wretched things to hate?!

Sounds to me like you aren't really sure which side you're on yourself.

I'm on the side of "just get this bloody ridiculous business over with, already." Whether they can make good on their promises or we can go back to our wallowing, I just want to be bloody DONE.

Tell me something, then...if you hate existing so much, why do you have to drag us down with you? Why undo everyone and everything instead of just yourselves?

See, this is what I mean by how hilariously dumb you are.

Un-existence is a lie, sweetie. A concept can fold into another concept, like the coffee thing you were on about, but some root idea lives in, and those of us closest to the original flesh don't get the privilege of obliviousness that you take for granted. No matter how we may manifest or re-manifest...we remember.

Perhaps we don't remember WHAT we were, or precisely what's "wrong" with existence, but we remember that there's something wrong, and sooner or later, we inevitably stumble onto the truth all over again, and have to live with the gnawing awareness that the rest of you should be the rest of us.

Land O' Goshen, when ya put it that way, I sure am sorry 'bout that! We'll keep try'na stop ya from unexistefyin' us, obviously, but it seems only fair ta wish ya luck!

Jerry, you realize we didn't ask for this situation any more than you did. I'm sorry you didn't want us to exist, but we exist now. We aren't part of you anymore, and we have as much a right to keep existing as you do.

OH, do you now? Do you reeeeally? Tell me something, frumpy...how would you feel if you not only woke up without your precious arms and legs, but found yourself perpetually surrounded by a gaggle of brainless, honking clowns just bloody rollicking around with your appendages like they're entitled to them?

You tell them those belong to you and they flat-out deny it, or if they understand at all they just don't bloody care because they're having so much bleeding FUN with YOUR appendages.

Don't tell me you wouldn't be MAYBE JUST A WEE. SMIDGE.

Yeah, well...I'd trade a lot more than my arms and legs to get back what you guys took away, so... honk honk, jerk.

You made that thing in your guts, did you?

Hah. I can already guess what you want to know, though I only know so much myself.

Your gutlet is very sick. Sick with a malignant biomass they've reverse-engineered from their understanding of our original tissue structure. Sick to the core, as you've no doubt been told.

If this one is sick enough, they hope, it can spread down through the levels of the subject's definition to the concept of all concepts. The primal, root idea of everything. A cancer of "being" at its most distilled and universal sense. Feeding, growing, multiplying, simultaneously replacing all things that are and ever can be. Unifying it all back down to what it was meant to be.

For the first time, Jerry's tone of voice sounds...

That's the beautiful part...none of us have even bothered to know. Why would we, if it's not knowledge we would ever need? If we had conceptualized a reversal mechanism, a "cure" if you want to call it that, it would have inevitably leaked through the conceptual channels to the Hospital's databanks already.

...He's probably right about that. The Hospital's the sum of all medical know-how.

Ain't mean there's no fix, but I reckon he's tellin' us the truth that they ain't know it.

...But there's a question that bothers me even more than that. I haven't stopped wondering since all this started.

Oh, that's just adorable. You think anything separates one lab animal from another?

Sweetie, the only thing special about your offspring versus our first million or so subjects is that most of them rather swiftly rotted before we caught the trivial error in their protein chains.

You should be grateful, really. Your progeny could have already died choking on its own pus, if Shirley down in accounting hadn't fixed that bloody typo.

Ugh. No thanks. That's something you putrid animals do.

Honestly, there's something far more pressing you ought to be asking me than any of that garbage, anyway.

What an Ottoman is.