[As a special bonus to long-time patreon patrons, Doctor Phage is now regularly answering their questions.] 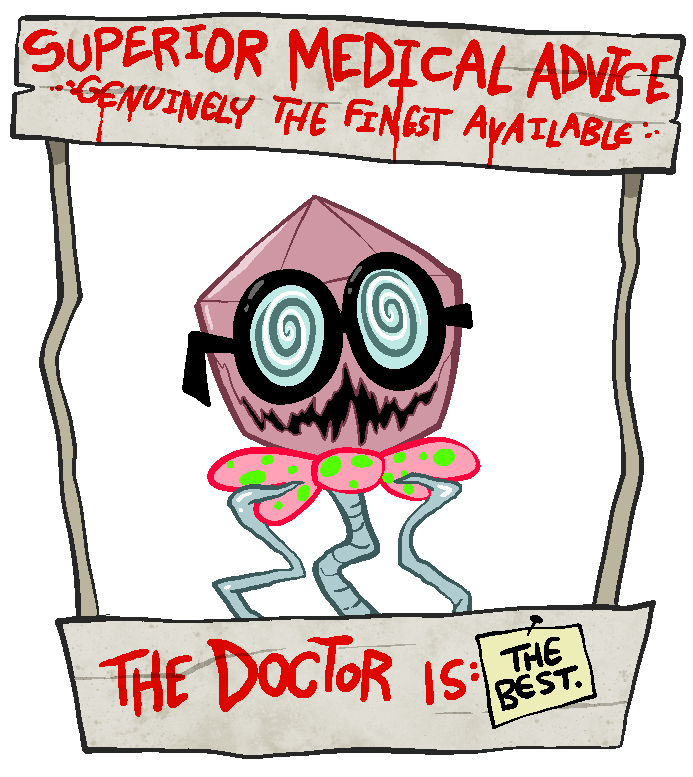 What!? A grey channel!? HMMMMMM! Awful lot of councel requests from the grey lately, aren't there?! Can't imagine why!

Rest assured, herman bioforms, you have my word that your trusted H.M. Phage, T.E. will answer your queries as clearly and concisely as your threadbare perceptions can non-fatally process!!!

"Phage, Phage, out of the spectral zones (violet, grey, ect), which are the most safe to visit? I don't want to catch any strange foreign core-blights..."

Oh! Well!! For a revaporazored or ungibleted greyzoner, the safest zones are the violet through chartreuse, while the most unsafe for grey of any category is, of course, their native grey, in which they experience a staggering 100% rate of eventual mortality due to the unprotected nature of their conceptual cores and steady background reverberation.

I wouldn't worry about core-blights - we're fusing horizontal under All Spiral's Frunchening, as you know, and our facilities offer a twelve-for-four deal on viscous membrane flushes with a full cavity scrub!

"What was your most unpleasant patient experience?"

Hm, well, I wouldn't concern yourself with that. A patient of the venerable Doctor H.M. Phage, T.E. is guaranteed a positive experience or their perception scrubbed at no extra charge! On my end, I've certainly had nothing that comes to mind since my last perception scrubbing! The finest in the range!!

"Hyperparasitic mistletoes have infested my parasitic mistletoe! I've tried requiem scrubbing and de-shift loops, but nothing seems to work. I thought shedding the paragel cortex would fix it, then I tried flushing with gloomsap, but it only made them flower! What should I do?"

I wasn't aware mistletoes persisted into the grey! I assume they take the same quadrupedal meat-form as their grey-anchored cousins the musselfluts, or "giraffes" in grey dialect. A flowering giraffe is indeed cause for concern, invisible as it is to most of your kind before it bores a slipchute through the paragels and begins to metabolize grey-layers.

No problem for the grey themselves, of course - what they don't know they've lost can't exactly hurt them - but it certainly makes travel through the grey more complicated and less amusing for the rest of us.

Musselflut or mistletoe, it's best to erase giraffes indiscriminately from any grey channel they've established themselves in, just to be on the safe side.

"Dr. Phage, please help! I've got a terrible case of bumbleblot rust on my inferior end-effectors! I've tried synchronizing it with a peripheral Lukaduk, shifting it onto a glitched and degelled copy of my backconcept, and soaking it in epsom salt, but nothing is working! What can be done to clear it up?"

Unperceived by most of the grey, bumblerot is a common side effect of exposure to the concept of solids. I would advise a break from existence in a solid matter-state and to discontinue further interactions with solid beings for at least a quarter-spiral, but beware roving crust-shufflers or "teddies," which feed primarily upon unattended concepts of solidity. Remember to store such unused concepts in an appropriate containment vessel during your recovery period, such as an old pickle jar in a cool, dry place or the visualization of a horse under ultraviolet light.

"Dr Phage Dr Phage! The tiny civilisations built into the outer walls of the hollow spaces inside my body have declared war against each other! How do you feel about geese?"

How do I what about what!?? I'm not sure what your sound hole is attempting to communicate there, but for your first question, I believe what you're describing is usually perceived as something called "diabeats" in your native zone.

It is my professional understanding that these "diabeats" are tied to sugar intake, and that sugar intake is necessary to your ongoing biofunctions. I can therefore deduce that diabeats are a syndrome of a gross sugar deficiency, and recommend that you refrain from the intake of any other nutritive compounds until such time as your endopolitical climate has resolved its differences.

"Do you have a favorite bowtie"

Perish the thought! One cannot simply rank that which is consistently without flaw.

"Doctor Phage, what's the status on the patient? You know the one."

Er-well...that is...assuming you're referring to THAT thing, which you certainly shouldn't be aware of by any logical stretch, I can promise we are working 'round the spiral to debranchinate and stabilize its exponential perceptual expansion! No worries! We most certainly haven't lost most of our zone's definitation or staff to any sort of accelerated conceptual degradation, if that's your concern! What even means such words!? Even I wouldn't know! They're SIMPLY not things!!!

"phage you gotta help me doc, I swapped my gels quite a few layers back and found that im just dolphins alllllllll the way down, what do i do?"

Oh, is that all!? Never fear, friend! No medical treatments necessary: you need only to please leave immediately. Good luck out there!