Stretching myself pretty thin every Halloween season, I have to admit that I've still barely done any work on Awful Hospital during this break, but I definitely needed the break in order to do anything, and it's still returning on October 31st no matter what. If I haven't gotten any extra work done by then, I'll just be doing all the artwork as I go along, last-minute-like, which is how I've almost always done the comic so you're actually not really going to notice much of a difference.

No, taking a break from updating and ostensibly getting a bunch of stuff done ahead of time was all entirely for me, to make it just a little bit easier on myself, but if I were any good at making things easier on myself I'd probably have had a real-world job and a complete education of some sort...and then I'd be too busy to have ever made this comic, so you should be thankful that I'm actually that terrible at managing my own time. You would not have this comic to read if I actually had it together, and I think that's probably kind of true of every single webcomic and webseries out there.

Anyway, while you continue to wait, here are some personal thoughts and reasoning behind some of your fellow patients in the intake ward! 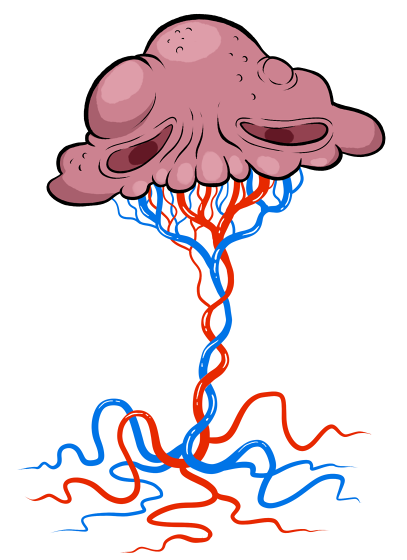 Sploenard Spleenus (Depressed Spleen)
Sploenard was one of the first characters I ever came up with, almost as soon as I decided that your fellow patients would all be different body parts. The spleen is actually one of the least important organs in your body, helpful but not critically necessary to living a long life, and most of us only know the spleen as an organ constantly referenced in cartoons for its funny name. This made the spleen a prime candidate for an insufferable pessimist and the kind of lonesome, bitter old man that, likewise, almost nobody would miss.

But...there may be more to our spleens than we really know, and maybe more to this spleen, specifically! We'll just find out when we get there!

A "rule" I gave myself early on was that no patient would have any appendages or facial features not normally connected to them, so I couldn't just slap buggy eyeballs on everything to make it a "monster." Instead, Sploenard's "eyes" represent scarring from old injuries or infections, with the rest of the spleen looking lumpier, more deflated, and more ragged than a healthy one is supposed to. He's been through just about everything he could and still somehow keep on going. 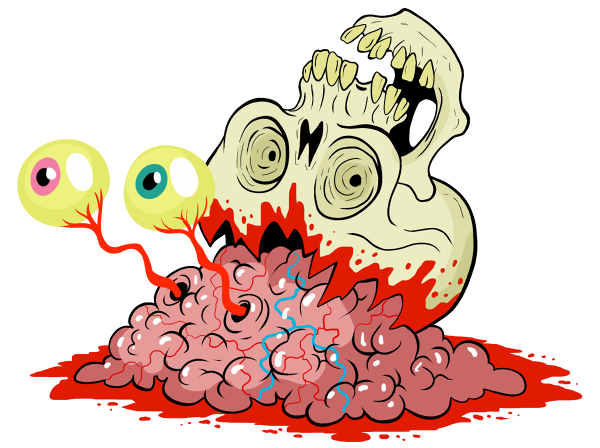 The Broken Skull
This wound up my favorite of the patients; I think the "snail" formed from a busted head is probably the most visually striking design out of the patients and could have even worked as an overall series mascot. I guess it's still not too late.

This character probably makes more sense when you know he was originally a concept for a ghost. The ghost of a speed-obsessed motorcyclist who wouldn't wear a helmet and became an ironically snail-like phantom head injury.

It still worked just fine under Awful Hospital rules, but now you know why he speaks mostly in racecar noises. 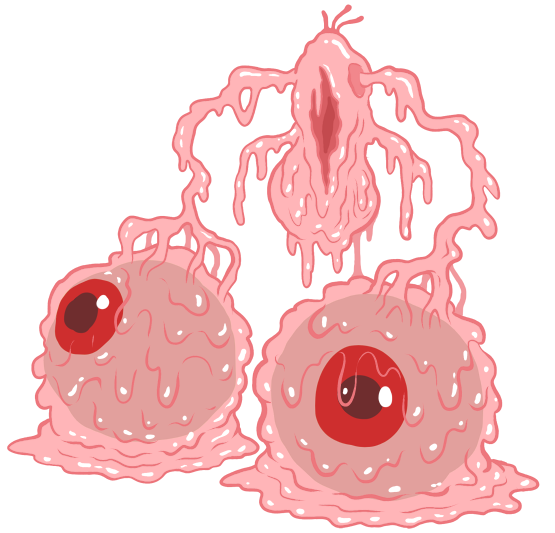 Eyeda Sorrit (The Gooey Eyes)
This actually wound up my least favorite design of the patients for whatever reason, maybe because people found it confusing to read, or because it looks too much like something out of my Mortasheen setting instead of something unique to Awful Hospital's sensibilities. What I was going for was to have a creature formed out of Pinkeye slime, weighed down by the eyeballs it "feeds" on, which might have actually been separate characters all along.

Eyeda at least helps establish the running joke that none of these beings are suffering the problem you think they are at a glance. The pinkeye monster has a bad case of lice, which also wound up being tiny clowns because.......zone stuff? That was honestly pure improvisation based on your comments and feedback, like countless other things in the comic, and I still wasn't sure at the time what kind of tone or total level of weirdness I was going for. Does it still fit in with the feel of the series? I don't know! 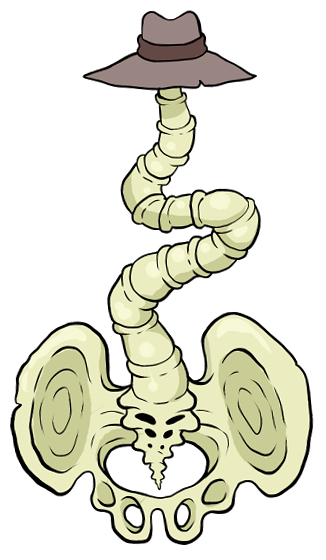 Angus Cobb (The Crooked Spine)
I knew I wanted one of the patients to function as an item shop from the start, and a "crooked" spinal column felt too obvious not to do. I actually intended to have a type of enemy monster that looked like this, with a "stinger" on the end of its spine, and Angus would have just been an injured one that started a business instead of running around killing things.

I still like that idea enough that maybe I shouldn't have just ruined it, but it feels like it conflicts with what I actually want these organ-beings to represent. The "rules" of this setting are pretty flexible, though, so maybe there's still room somewhere for his more violent cousins.

Lacey (The Wound)
The idea of a sentient wound began as another enemy monster concept - wounds that would crawl around, sluglike, and still function as holes through whatever surface they passed over. This was a little complicated and enemy concepts were getting too crowded, so a single wound-being, or network of them, became one of the patients instead, even if a "wound" isn't really a body part. 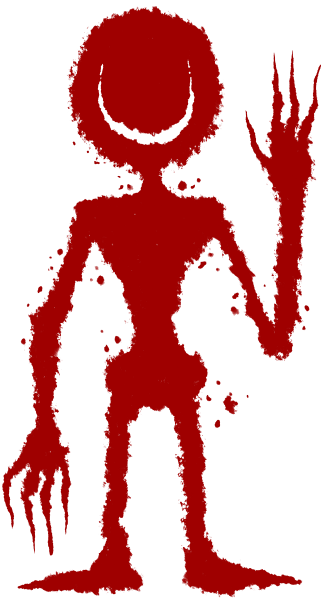 Bloodstain Bloodstain (The Bloodstain)
Bloodstain wound up being the most-liked patient as soon as bloodstain spoke, which was, once again, all improv. I had plans in place for almost all the other patients, but Bloodstain came fairly close to being one of your first hostile encounters. Body parts were going to be friendly, while blood spatters, wounds, blisters and other "symptom" beings were going to be dangerous, but the line was already blurred too much for that to really make any sense. 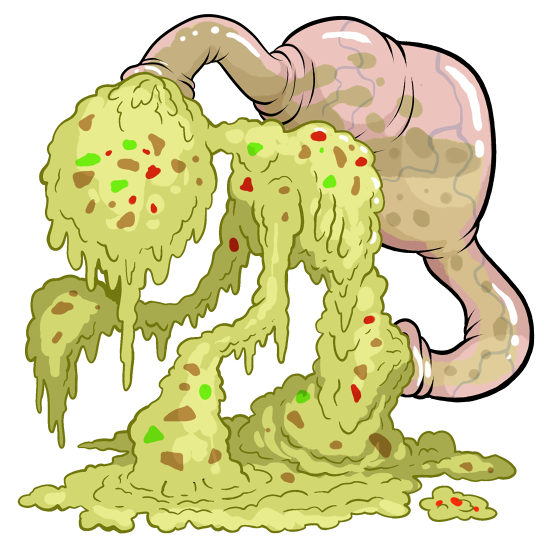 Puke Guy
Is he the barf or is he the stomach? Is he both? This one was not only conceived as a more dangerous monster, but could still very easily head that way, and I didn't actively try to make this one all that cute or charming. We haven't even seen just how huge he may have gotten since we gave him the pills he was absolutely not supposed to have.

...Or was he?! One of our biggest ongoing themes is that what's good for someone isn't always simple and obvious. 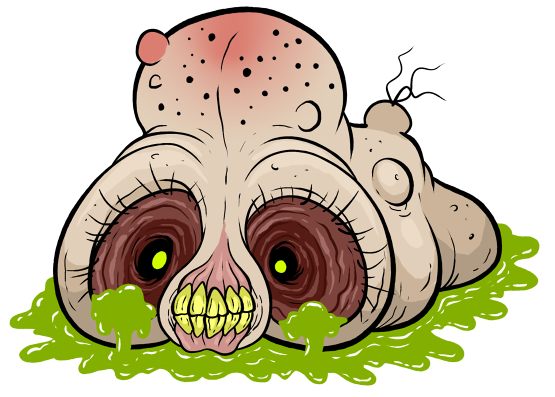 Nobody Nose
I've mentioned this before, but anything related to nasal discharges is my actual gross-out button. It was so severe when I was a child that I wouldn't have even been able to draw this at the time without literally vomiting, dry-heaving again every time I accidentally thought about it, and losing utterly all appetite for food until probably the next day, much to my parent's repeated horror. This was all exacerbated by having absolutely chronic, relentless sinus problems myself, sometimes bedridden with sinus infection on a nearly monthly basis.

So pretty much everything about this monster, and especially the contrast between his graphic detail and sad, sympathetic characterization, was a really personal thing that I basically had to do once the setting was figured out.

Originally conceived as an old man with a Droopy-like voice and personality, everyone assumed he was a little child as soon as he showed up and I just liked that better. I was, after all, a little child when this character would have ended me just to look at.

He also slightly cheated the facial feature rule with his toothy mouth, but I wanted to make absolutely sure you could read the nostrils as eyes, especially if that helped their grossness at all. I guess it isn't really cheating when your mouth is so close to your sinuses anyway, but that's just another thing that consistently left me traumatized back in the day. I still don't like to think about that proximity too much.