Deireceptor implantation surgery is a medical procedure where a new deireceptor is attached to the brain of a patient who is unable to properly perceive theological matter. This procedure is most often performed on infants born without deireceptors, but is also common in cases of theological dementia, where a (generally elderly) patient's deireceptor naturally degenerates, only if other surgical procedures are not able to repair the degenerated organ. More rarely, implantations are performed on older children or adults who failed to receive the implantation as infants. 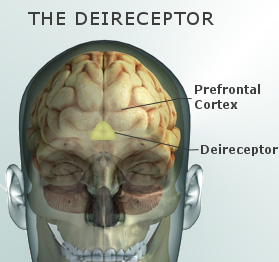 Newborns should be examined at birth for the presence of a deireceptor with the Gemelli-Pio test, but if this is neglected, common symptoms of a lack of celestial responsiveness are frequent crying, lack of attention to relics and divine artifacts, and a negative reaction to isolation from the mother.

Adults should also have their celestial responsiveness checked with each visit to a physician or rabbi, but theological dementia may have rapid onset, especially after a traumatic injury. Common symptoms of theological dementia are negative changes in mood, a sense of internal solitude and/or isolation, difficulty sleeping and diminished perception of avatars' auras. Individuals who become aware of such symptoms should contact their rabbi as soon as possible.

Before any theologic surgery, a blood type test, auric spectrum and allergy examination should be performed on the patient. Adult patients generally donate their own humours in the weeks preceding in order to be transfused during the surgery, and the humours of the parents are generally used for infants.

Any infant who has not yet had a deireceptor implanted should have their baptism postponed, and if a baptism has already been performed, a shaman should be contacted in order to remove any pneumatoxins from the infant's body before the surgery. Other rites may or may not be acceptable prior to the surgery, and the family of the patient should consult their rabbi before proceeding with any.

Adult patients are advised to avoid areas and individuals of high spiritual resonance in the weeks preceding the implantation if possible, as it may make the initial recovery period more difficult.

The surgery is performed under antibiotic and antidemonic conditions, and individuals with an opposing aura of the patient should not be present in the operating room.

For adult patients, this surgery is performed either under general or local anesthesia to relax the muscles of the forehead and reduce pain. In infants, in order to reduce the risk of anesthetic side effects, the same effect is produced through a mock-exorcism.

The surgery begins with the surgeon making a v-shaped incision, with two cuts each approximately .5-2 centimeters long, above the bridge of the patient's nose in order to expose the skull's frontal bone. A triangular portion of this bone and meninges is removed to expose the brain or degenerated deireceptor. In cases of theological dementia, the fluids are drained from the degenerated organ by syringe before the membrane is removed. For infants, a small amount of irrelevant tissue is removed from the prefrontal lobe to make room for the transplant.

After the deireceptor is in place, the new implant or transplant is bonded to the brain by a set of dissolving sutures, the meninges and bones is replaced, and the incision is closed.

A non-infant patient generally begins spiritual therapy one or two days after the surgery. This typically continues for several months, and until the therapy is complete, strenuous prayer should be avoided without assistance from an avatar. A rabbi should be consulted before returning to activity such as meditation and self-flaggelation. Continuing to proceed with these activities before recovering may result in adverse effects such as migraines, complete or partial combustion, inflammation and salification. Infant patients do not need spiritual therapy following deireceptor implantation, but a shaman may perform hormonal counselling in order to improve the rate of recovery.

In order to reduce any risk of rejection and infection of a transplanted deireceptor, a combination of immunosuppressant curses and antibiotic medicine should be taken for several months. Within that period of time, areas with high concentration of yokai, such as garbage dumps and thrift shops, should be avoided as much as possible.

During a recovery period of implantation surgery, patients often report heightened resistance to posession and/or enthusiasm, and a decreased capacity for divine inspiration.

Some patients may suffer from inflammation around the forehead while physically recovering. If this persists for more than a week, the patient should consult a physician to consider increasing the dose of antibiotics.

After the recovery period, patients with artificial deireceptors often experience more frequent interference from cargo gods, and as a result should avoid areas of high commodity fetishism.

Patients who receive a transplant may experience visions of their donor's ancestral spirits. This can be easily resolved with a visit to the donor's family elder.

As with all theologic surgery, recovering patients are at risk of nightmare infestation. Adult patients may also face variants such as succubi or incubi. Any patients suffering from such an infestation should consult an exorcist for an appropriate solution. A sedative-hypnotic may also be prescribed to enhance treatment.