After an entire couple story arcs involving the seven kids and their seven Digimon, it was only natural the series would raise interest by adding an eighth... 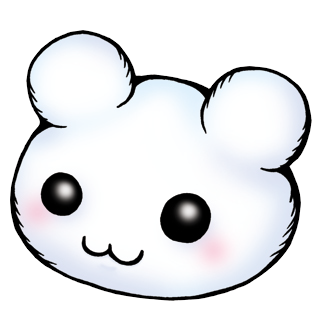 Not much to see here, really. It's a Botamon cousin with a "snowy" motif rather than the cool, hairy shadow look. First baby stage I'm totally impartial to, honestly. 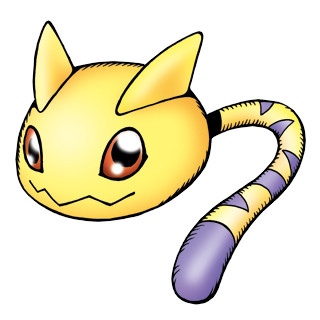 A little bit more fun is this legless, ball-shaped cat-thing with a cute, jaggedy mouth, though still nothing to really write home about. 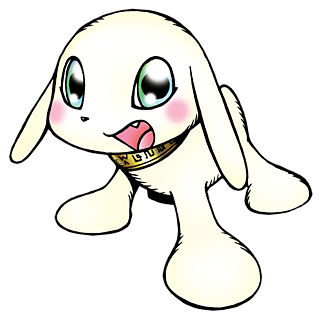 Here's where this line gets a little peculiar, because the kind of forgettable Salamon here is a dog Digimon that evolves from a cat and then straight back into a cat. Maybe if we got to see a little more of Salamon, I could give it a real rating, but the design isn't particularly interesting, and this is one child stage we almost never see in the anime. 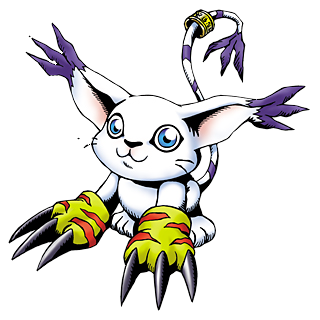 ...That's because, unlike our other seven heroes, this Digimon spends most of her downtime in her adult stage, never reverting back to child form. It doesn't effectively make much of a difference, since this is an adult stage that looks and acts like a child stage anyway, but we never do find out exactly how this works.

Does this mean our other heroes COULD remain in their kaiju-size battle modes if they really wanted to? That's certainly not what we're shown. They quite often "run out of power" and revert back whether they like it or not. Is it that Gatomon has a whole lot more experience than the others? That hasn't been applied to the rest of the gang either.

It seems like we just have to chalk this up to "the writers wanted it that way," but if you want my personal theory, I think it's probably a mix of both experience and personal identity. An experienced enough Digimon can hold the same form indefinitely, as we see with most of the non-focal Digimon, but whenever possible, returns to just whatever form it's the most comfortable with.

I'm also not sure why on earth they changed "Tailmon" to "Gatomon" outside of Japan, but we're going by Gatomon because that's what I knew first. As for her role in the show, Gatomon is initially introduced to us as a villain, and that's not really a spoiler, because we're already told a new team member is coming before this highly marketable kitty cat shows up and the whole narrative zeroes straight in on her.

Gatomon's human ends up being Tai's baby sister, Kari, and there isn't a whole lot more to her personality besides the fact that she's a quiet, nice little kid, but I guess that suits their relationship well enough. This is the one partnership in which the Digimon is already significantly stronger and more experienced than her human, but at the same time, the one partnership in which the Digimon is the only one learning and growing from that relationship, with Kari helping this hardened, tormented, formerly evil feline rediscover kindness and forgive herself for all the horrible things she supposedly had to do in the employ of the real villain, Myotismon, who we'll review in due time.

It's an interesting setup, at least, even if she's not as interesting to me as some of the other Digimon. 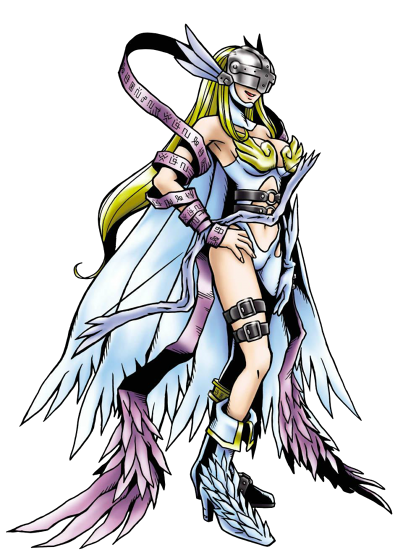 And, surprise, the BIG secret to Gatomon is...the same big secret to Patamon, only now it's a girl one?

I honestly don't want to bash Angewomon, because she's still pretty badass as far as pretty blonde angel-people go, but she's pretty much exactly a gender swap of Angemon minus even his already subtle levels of "scariness," such as the giant-sized hands or the metal bolts, and that's unfortunately expected of female characters in a crapton of media. If they're evil, then they get to have some mildly grody aspects...but still never TOO grody.

It's interesting, at least, that Angewomon is a higher level than Angemon, and in several games, Angemon can himself evolve into Angewomon...but isn't that all the more reason to give her a design at least as imposing? At least put some equivalent muscles on her! Anything!

I will say that I like how her bow is an organic part of her wrist, and she does fit well into Gatomon's story of redemption and revenge. Myotismon basically goes out of his way to recruit Gatomon before she ever finds her human partner because he knows he's ultra-vulnerable to the combined attacks of Angemon and Angewomon.

I'll just give her a three. Her design could be better and she feels redundant, but I still generally want to like her. 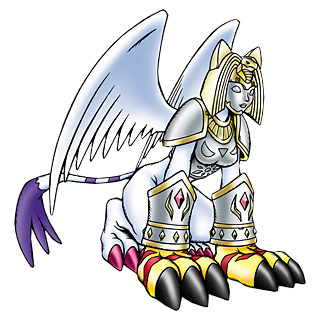 I initially left this one out, because I thought I might cover all the "armor" digivolutions and fusions on their own pages later, but I already put Shakkoumon on Angemon's page. Nefertimon is a Season 2 evolution of Gatomon when combined with a special "digi egg" item, and it's a lot cooler looking than Angewomon, obviously. I especially like its expressionless, porcelain mask of a face.

This stage, however, is more equivalent to an alternate adult than an alternate Perfect. Armor evolutions crop up in the second series when regular Digimon evolution is basically deactivated throughout the digital world by the new villain, though even after that stops being an issue, Kari DOES keep using Nefertimon at least as rapid transportation.

It's important to note here that Gatomon has a dozen some other canonical "armor evolutions," but this is the one they feature in the show, and others are simultaneously possible armor evolutions of other, unrelated Digimon, so we might be giving them their own page down the road, or their own individual pages, I really don't even know anymore. I don't know what I'm doing. I can't emphasize hard enough how positively chaotic these reviews are going to inevitably have to get. 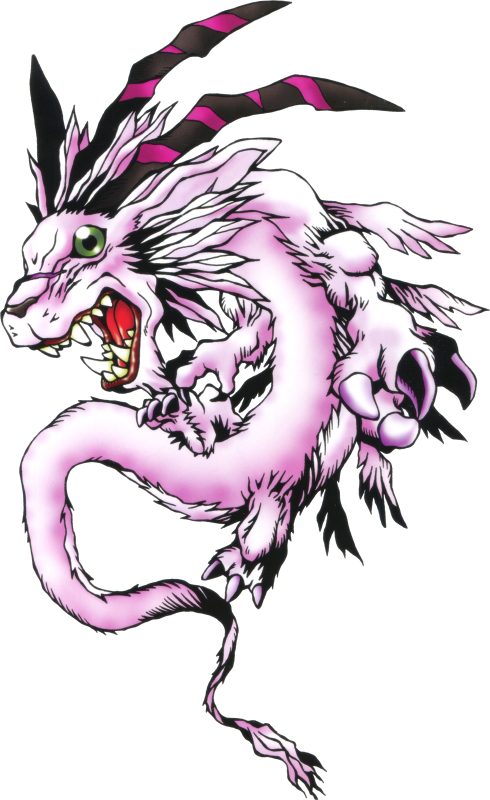 SO, GOOD NEWS, instead of a bunch of dorks in too much armor, this freaking thing is our Angewomon's primary Ultimate stage according to the anime movies, and it's pretty killer that the angel lady can turn into this positively beastly luck dragon. It doesn't get quite the same horrible, snarling face in the anime as the official Bandai art, mind you, but still. I like this turn of events much better than the alternative. 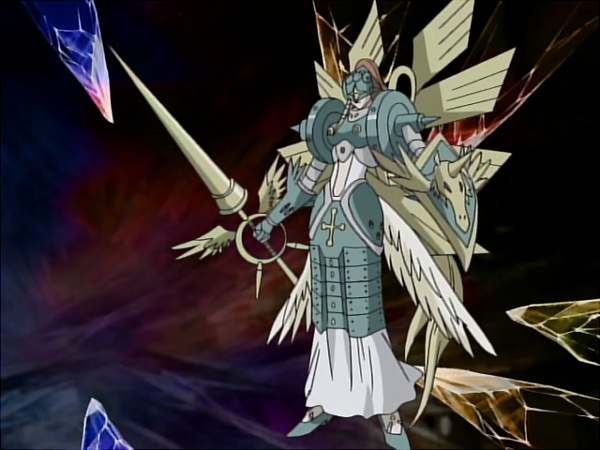 SO, LESS GOOD NEWS, here's that alternative, and I have the same complaints here as I do about Magnaangemon. Fortunately, the Angewomon we know in the anime doesn't typically evolve into Ophanimon, but I do see a lot of people treating her as the "more fitting" option, and I have to disagree. I don't have an argument to back up that disagreement other than that this is the boring one. I just disagree.

I'm also not letting this affect my rating or anything, but would you believe that guy who drew the boobedy Rosemon card art STILL insisted on sexifying Ophanimon's rigid metal suit? 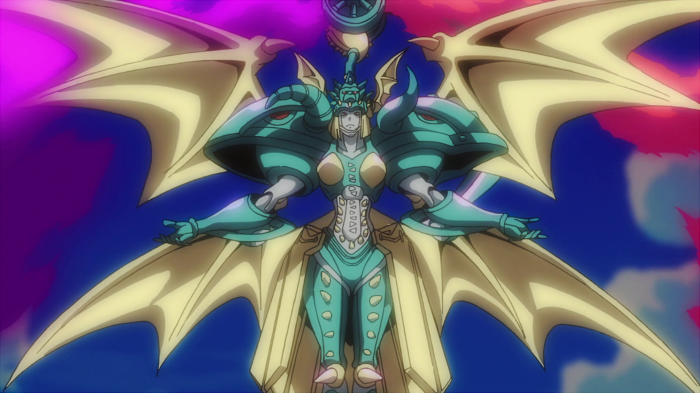 SO - KIND OF GOODISH NEWS? - there's a corrupt and evil alternative to Ophanimon, actually a "dark digivolution" like Skullgreymon, which may still be a human in a suit and all, but it's a slightly more badass suit than regular Ophanimon, and much more importantly, it can fuse with the "corrupt" form of another Digimon to turn into possibly one of the most radical things you're going to see in a Digimon review ever on this day.