Having finished the original eight heroes, the first season's first villain and a bevy of their spinoffs and cousins, it is now time we dive straight into the deeper Digimon pool and review basically whatever I feel like until I decide it's time to tackle the Season 2 heroes and villains.

Naturally, the first thing I want to do with this newfound freedom is to immediately explore one of - that's ONE OF - the Digimon that primarily eat shit. 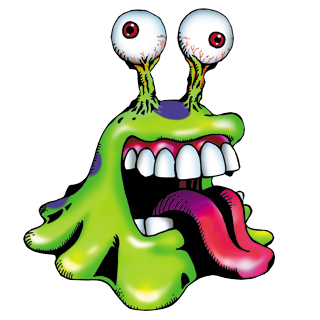 Behold one of the original seven Adult Digimon from the very, very first Digimon Virtual Pet, and one of the other courses down which Agumon could go.

Numemon, however, was ostensibly an "undesirable" evolution - if you can believe it - actually even weaker than a child Digimon and only obtained should you fail to meet any of the minimum requirements for any other Adult, most notably when you fail to clean up any of your digimon's virtual poop. Yeah, its traditional color throughout the series may be candy-pink, but that's neither yogurt nor ice cream nor merely "sludge" or whatever else the English dub wound up calling it, and as I'm sure you can imagine, Numemon's primary attack method is to generate even more of it.

I'm not usually that big into toilet humor, but a pitiful, unwanted slug that eats dookie and typically lives in the sewer really speaks to me on a spiritual level, and anything with bare, lidless eyeballs on veiny stalks is love at first sight. There's a real "Rat Fink" vibe to Numemon, if you ask me, but knowing the creator's love of Western monsters, I think Numemon's real inspiration is obvious; where else have we seen such distressingly human teeth and gums on a gluttonous green blob, also bearing in mind that "nume" means basically "slimy?" As you can imagine, Numemon are often the butt of jokes throughout Digimon media, often showing up when they're in the mood for a gross-out joke or just a really, really pathetic monster, though in the first season, it was actually the prissy Mimi who first befriended a band of the smelly mollusks.

But as the original "Magikarp" of the Digimon world, Numemon too has its own "Gyarados"... 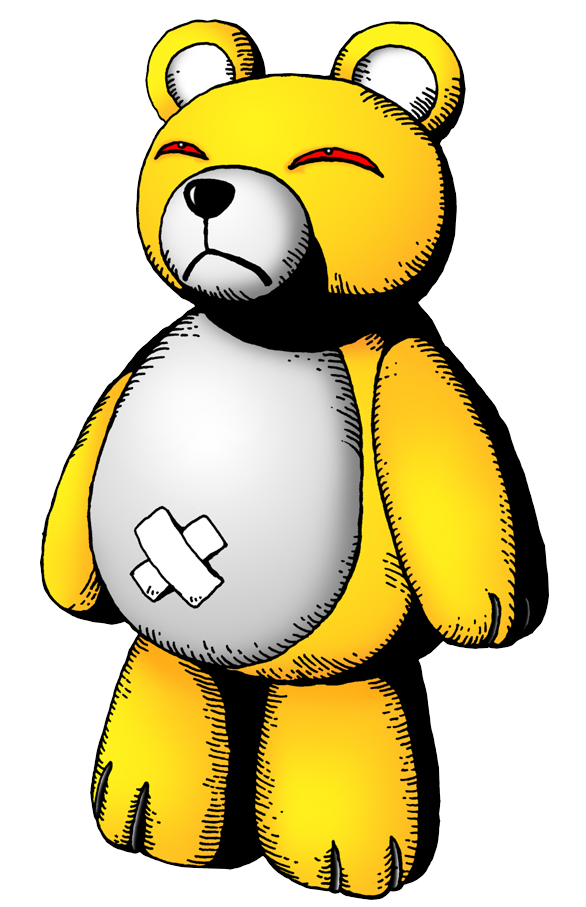 Don't worry, folks: this is actually still a Numemon! It's 100% canon that one of the coprophilic gastropoda is operating this gigantic teddy bear from the inside, and in some games, you even "evolve" Numemon to this form by finding it an empty mascot suit to slither into. In the virtual pet, on the other hand, this evolution requires the same care and effort as any other "Perfect" Digimon, so I like to think the overall idea here is that this new form represents your unconditional bond with a creature many others would have only given up on, and they really lay the heartbreak on thick with the fact that Monzaemon is quite the powerhouse in battle...but also has the shortest lifespan of the original Perfect stages.

To end up with a Numemon, you have to neglect your poor Digimon completely. To evolve it, you have to accept the abomination you created, buckle down, and start caring about it. The result is a Numemon dressing up as something it isn't and pushing itself to the absolute limit for you. If that's not one of the most powerful things you've ever heard in association with something called "Digimon: Digital Monsters," I don't know what is.

So, while we can't quite see our beautiful slug child anymore, I still give Monzaemon a 5/5, though if you DO want your Digimon's slugginess to hang out proud and free, you're in luck! 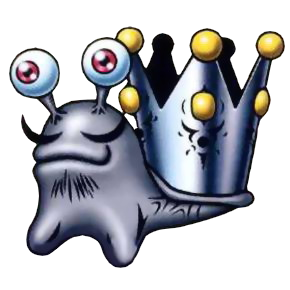 Sadly, you can kind of tell this is a later Digimon just by the lower level of detail on those eye stalks, but the idea of a kingly Numemon with a giant, silver crown for a shell and a little curly mustache is an acceptable enough alternative to Monzaemon, and its existence was established in Digimon World 3 as a Numemon who declared itself king of a place known as the Dark Trash Data World. What else would anybody want to be the King of?

now, before we move on the Ultimate stage, there's actually a couple of other alternatives to talk about... 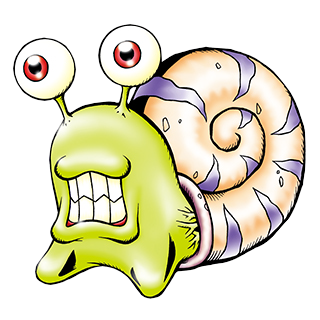 Simply dubbed "Shelnumemon" in earlier English material, this variant was introduced in the sixth Digimon virtual pet, the same one that gave us Tentomon, but was surprisingly enough not this virtual pet's "failure" evolution option. Karatsukinumemon is otherwise exactly the same thing as Numemon, including overall battle power according to every game since, merely borrowing its shell from other mollusk-like Digimon. There are no such Digimon who naturally have this particular shell, mind you, but it's kind of like how the Shellder on Slowbro's tail changes shape when they evolve together. What it does have over Numemon, other than the shell, are the eerie red irises and the smaller but sharper-toothed mouth, and it's actually hard to decide which set of features I like more. 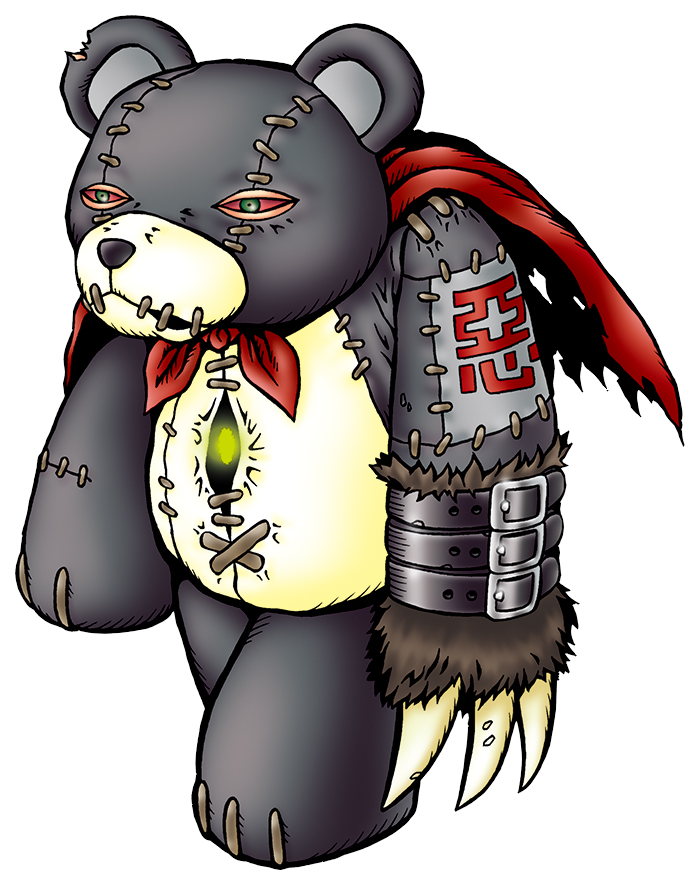 So, bizarrely, this darker and edgier Monzaemon exists, but it doesn't evolve from Numemon in any known material thus far, instead evolving from an ecclectic selection of Adult monsters that even includes Kabuterimon. It has, however, been associated with Numemon and regular Monzaemon on a number of occasions, and one episode of Digimon Frontier even pegs it as a Monzaemon subjected to horrible exprimentation.

It's a pretty damn sick design, too, easily one of the creepiest looking of the first hundred or so mons. I love those bloodshot eyes, the sewn-up mouth, the paw stitched on from seemingly some other monster and the single eye peering out of its chest in some of its official artwork. An episode of Digimon Fusion, if you want to consider it canon, also features a sinister Warumonzaemon chef who can absorb regular Monzaemon until it grows gigantic, which is treated as a makeshift Ultimate stage called Gigawarumonzaemon. 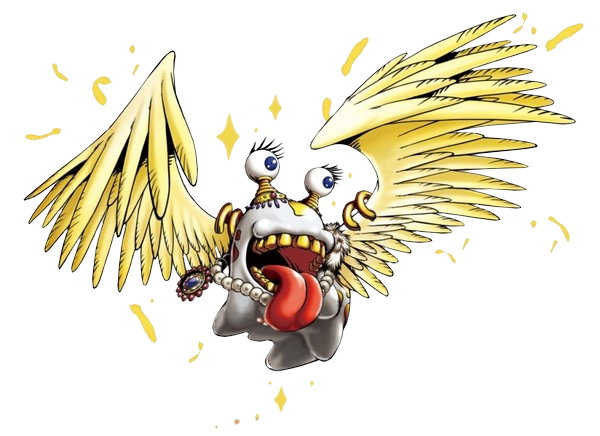 Now, at last, we have the Ultimate stage the franchise was gracious enough to design especially for Numemon, a digital dookie-slug who decided to go the route of all those grand, elaborate angel-type Digimon in what almost feels like a bit of self-parody from this franchise.

I appreciate that they ever grew fond enough of Numemon to give it an Ultimate stage that changes almost nothing about its core design other than the addition of wings and gaudy jewelry, the perfect reward for anyone who stuck it through all these years counting Numemon as their favorite digital monster. If they'd only do this for the Digimon I love even more than the little slug, I'd be set, but we'll talk more on that another time.

It's also worth noting that there's a Goldnumemon palette swap, just in case you wanted this thing to be even gaudier still. Oh yeah, and before we're done...there's also one palette swap of Numemon that they deemed worthy of its very own name and species designation, Geremon. There is nothing else different about Geremon, but its coloration obviously comes from the banana slug!