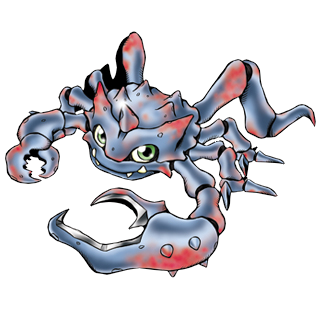 I believe I indicated at some point how random these reviews would have to get, so today, let's do Crabmon because I just felt like it! This design really could have used some pop-out eyes, easily the most endearing feature of an actual crab, but Crabmon is a solid, pleasant design and otherwise as good as a lover of crabs could ask for from a Digimon, especially a child level Digimon suitable for "main partner" status.

Crabmon even shows up as just that in the anime, however briefly, and appropriately paired up with a surfer kid! I like the idea of a kid who lives out on the coast and loves the sea and one day this crab starts talking to him and is like "yeah I'm both a crab and a computer monster, there's lots of computer monsters but I'm the crab one. Do you like the beach???" 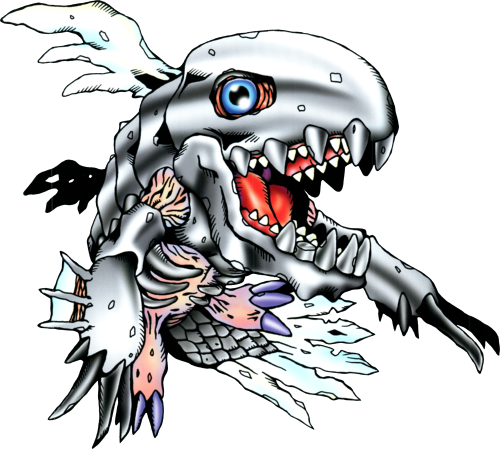 Despite the fact that there's an adult-level lobster Digimon out there, Crabmon's go-to adult stage is typically this kickass bony fish, dressing up a stylized coelecanth in all the BEST trademark Digimon features. It's got flesh-rimmed eyes peering from rugged holes in its cranial armor plating, horrifying teeth, paddle shaped claws, external rib bones and areas of excessively veiny flesh! I most of all love how the hind fins are really emphasized as weird little feet. I really can't imagine a better Digimon fish for those who like both Digimon and fish. 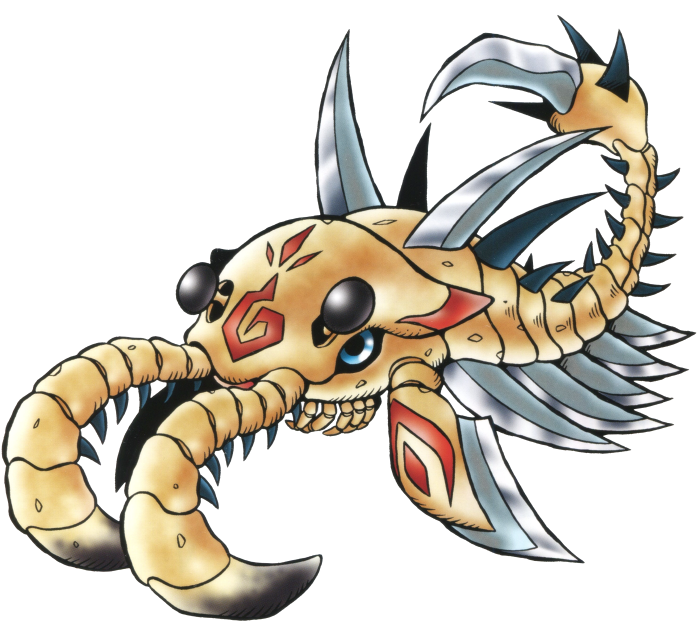 We could really just end this on Crabmon and Coelamon, but interestingly enough, Coelamon has repeatedly been able to evolve into this beautiful combination of anomalocaris and a eurypterid, translated in English as Scorpiomon because I guess they thought American kids, who aren't taught biology as a fundamental class, would be too confused otherwise.

This fella was actually the first time I ever saw Anomalocaris referenced in any media at all, and boy was that ever a treat to an American kid who DID know exactly what that was, and tended already to feel rather smug about it.

While the taxonomic progression of a crab to a fish to a panarthropod doesn't make much sense, I do love the idea of a Coelacanth monster evolving farther back through time into an apex predator of the Cambrian sea! It's just too bad that one of Anomalocarimon's only appearances in the series was as a minion of Metalseadramon who was subsequently killed for his bungling, a trope I really never care for in cartoon villain interaction.

Now, if the last eleven reviews are an indication, there will probably be comments on this asking why I forgot about something or another that can evolve from one of these Digimon, but I promise, it's only because I'm planning them for some other review. There are INFINITY TEN ways you can sort Digimon together, and we're only going to lump a bunch into whole "families" when they're especially coherent and especially "canon" as such.

Otherwise, the vast majority of these reviews are going to be just like this one: a short, sweet look at a couple of directly related or PROBABLY related Digimon as best as I can manage.