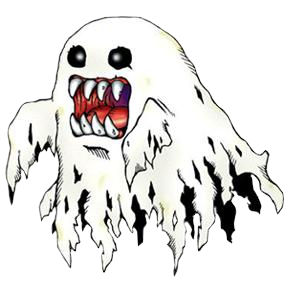 I didn't even know it was friday the thirteenth today! I missed a day there, so we had to upload Crabmon the same day, but who'd have thought Entry 13 would land on this day of days by pure accident?!

So we gotta do something spookular, and we may as well do Bakemon! While not treated as one of the full-blown feces-loving failure Digimon, Bakemon is a near-failure only barely stronger than a Numemon, and kind of implies that you were so bad at raising your Digimon, you up and killed it. It's a gorgeous ghost, though. Just a simple, cartoon sheet phantom who happens to have incredibly terrifying teeth and gums, not a visual combination I've actually seen that often, and the excessively tattered, dirty look of the sheet adds that decrepit early Digimon touch to an otherwise ordinary monster trope.

As one of the weakest of all spooky Digimon, Bakemon show up in vast numbers in the anime as the lowest-ranking minions of some major villains, like the vampire Myotismon, and in a one-on-one fight, the poor things can be beaten up by a human kid with a stick. That's also because these "ghosts" are completely solid, and don't especially exhibit any ghostly abilities other than levitation. There's also a variant on Bakemon, called Soulmon, whose one and only design difference is a witch hat so large it usually covers its eyes. It's also said to be a little smarter than Bakemon, and in at least one game, only Soulmon was capable of speaking. 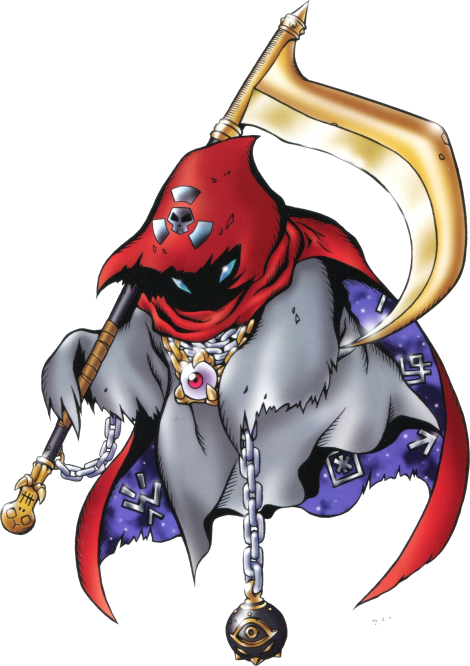 Bakemon can evolve into all sorts of Halloweeny Digimon, including a particularly special one we'll get to later, but its most direct evolution is this neat little Grim Reaper. I miss the teeth, but you can never go wrong with glowing eyes in a hood, and Phantomon has a lot of cool accessories going on, like the eyeball around its neck, the proportionately MASSIVE scythe, the cosmic inner lining of its cloak and the odd radiation-skull-warning on its forehead.

A single Phantomon appeared in Myotismon's employ, naturally as a sort of "general" to the many Bakemon.

METALPHANTOMON USED TO BE HERE, BUT MOVED ALL THE WAY TO REVIEW #230!