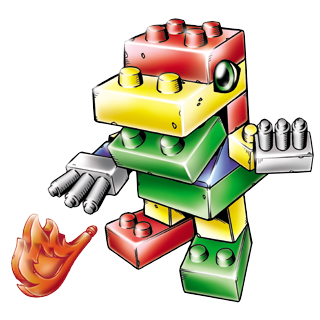 Today's Digimon is a bit of a sad one, because a fake Agumon made out of big lego blocks - complete with a plastic fireball it can spit from its mouth! - is a charming concept fully worthy of an entire toy-themed evolutionary line, but for twenty-some long years, this poor little thing has received virtually no attention and nothing resembling a thematic evolution. For singular digimon, it's hardly even worth repeating their name or designating their evolutionary level like we usually do, suffice to say that this is a child-level evolution just like the real Agumon.

Toyagumon's lore is pretty charming as well; apparently designed by a child on the internet and brought to life by the power of the digital world, it continues using the internet to reach out to human children and entertain them any way it can, but doesn't have much strength when it comes to actually protecting anyone from more dangerous Digimon and will simply fall apart when startled enough. The one thing Toyagumon does have going for it is that, at least according to an episode of Digimon Frontier, it can reassemble its pieces into any form it wants, and enough of them together can form fully functional vehicles, buildings and even giant robots! This was demonstrated specifically by the black, virus-type Toyagumon variants, who were also responsible in this same episode for transforming a Monzaemon into a Warumonzaemon. Pretty nasty little legos!

Or...wait...lego? It's DUPLO blocks that have those eyes, now that I think about it!