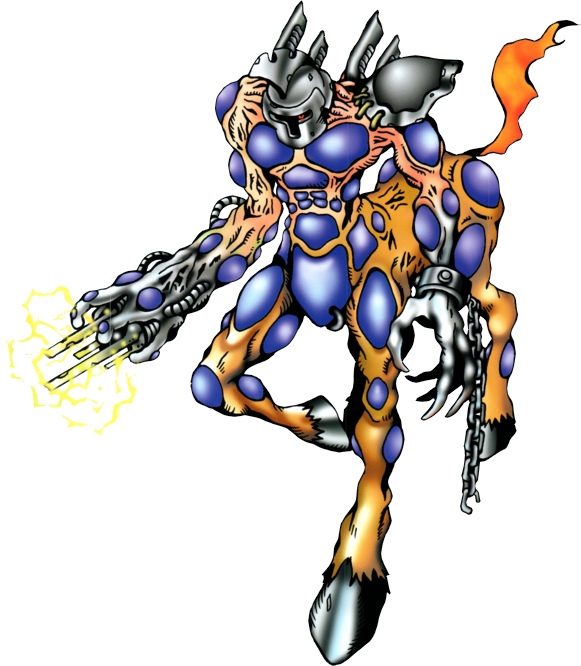 Here's another truly one-off Digimon, appearing quite early in the series but still denied any immediate family, which is really too bad, because there's a lot more going on here than just "a centaur." Have you ever seen a combination of man and horse anything like this guy? Just look at that fleshy, biological gun hand! That grisly meat-cannon is unfortunately not recreated too well by newer artwork, which often opts for just a regular-looking hand that happens to have a gun inside, but at least he always keeps his gnarled flesh, those bizarre blue nodules, the one-eyed Cylon helmet, the shoulder pad bolted directly into his meat and the tubular back spines ripped directly from Giger's alien, which Centalmon can canonically use as thrusters to run even faster.

There's just two really messed up things about this Digimon. One is that whatever the translation, they still never just call it "Centaurmon." Centalmon is considered the most official romanization, but some countries went with Kentarumon, and that doesn't even start with the right consonant sound!

The other really messed up thing about Centalmon is the ring pierced through the blue plate on what would be the "chest" of a horse, but reads as kind of the "crotch" when you put a beefy torso right above it. Just...lettin that hang out for everybody to gawk at, huh, Centalmon? I guess when you look like this anyway, you're going to be naturally pretty confident in yourself and your weirdo fashion choices.