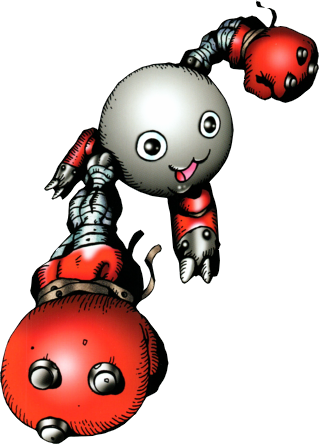 You know what, we should have probably reviewed Mamemon sometime earlier. We've only now officially seen every single Digimon from the very first, original virtual pet, and Mamemon was actually one of its three possible perfect-level monsters alongside Metalgreymon and Monzaemon!

You may recognize "mame" as "bean," which references this Digimon's extremely tiny size. Originally evolving from either Meramon, Tyranomon or Seadramon, the idea here is that the monster has condensed itself down into a concentrated body more powerful than ever, kinda like dark matter I guess. I like the contrast of that cutesy face on such a simple sphere but with those frighteningly muscled, metallic arms and clawed feet. It really does look like something disproportionately dangerous. 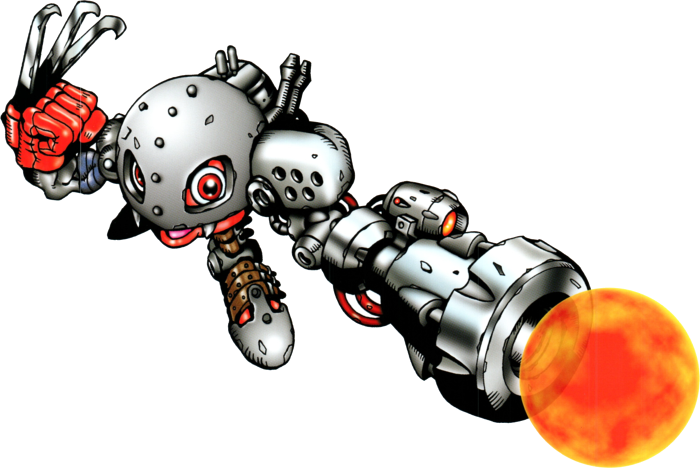 Of course something as novel as a killer bean-ball wound up with an extended family, and the very next Vpet introduced this cybernetic version, which adds even scarier appendages to the mix. I like the unsettlingly human hand with the horrible metal claws on it. 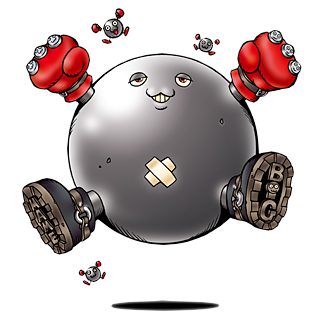 Mamemon, but bigger. That doesn't sound that creative, and the design is even less detailed than regular Mamemon, but I still really like it. Maybe it's the sleepy eyes, or maybe it's the shoes that stomp its own name into things. 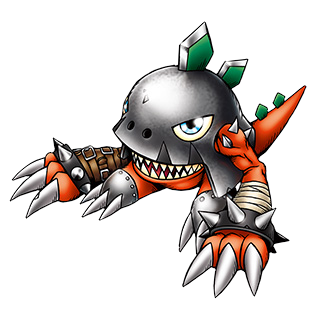 Mamemon can already evolve from dinosaur and dragon digimon, but they decided to throw in a reptilian version for good measure, which is pretty cute. It just looks like such a nasty little troublemaker, like it's probably swung from a chandelier or two in its life and wouldn't be averse to picking pieces of an airplane. Still, the Mamemon concept is beginning to wear out a little right around this point. 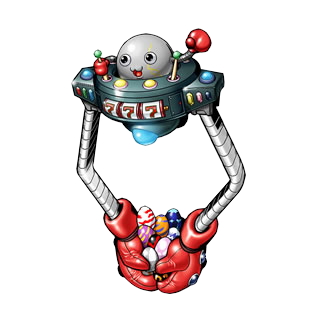 This one is just a Mamemon in a UFO, but it also has an arcade game theme because those prize-grabbing crane machines are sometimes called "UFO Catchers" in Japan. Catchmamemon is said to have a "serious, uncompromising personality" and "seems to think that managing digi-eggs is its duty." Seems to think? So it's not supposed to, but it does it anyway? Aren't those someone's babies??? 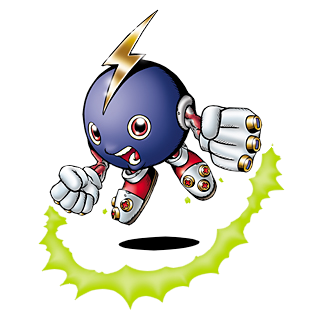 Yeah, this Mamemon is an adult stage, one down from every other Mamemon, and doesn't even get "mame" in its name! It can evolve into the original three Mamemon variants, which I guess is why it was created, but it's really not as interesting to me as any of the others. It just doesn't have that creepy-cute charm and the sense of a bigger monster collapsing in on itself. 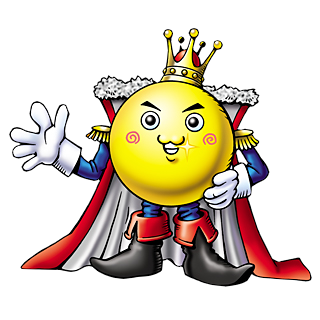 Likewise, the first Ultimate stage ever devised for the beans sacrifices their monstrous qualities for a gag that kind of falls flat, for me. Nothing against this guy, he seems like a funny character and all, but the Mamemons really deserved something more frightening to evolve into, maybe something with the same exact regular Mamemon body but even bigger, awfuller arms and legs than any of them. 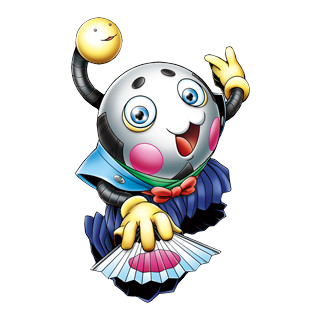 So this is our last true Mamemon, and what I said about the loss of monster qualities still stands, but it's at least a step up from its prince in terms of weirdness, if at least for that unsettling face on the end of its topknot. Apparently, this is a Mamemon who absorbed data from a period drama about feudal lords, which is a pretty funny concept, basically a more Japanese-flavored counterpart to Princemamemon's obsession with European royalty.

All in all, the Mamemon family is an interesting monster concept that unfortunately stretches itself a little too thin without as big a payoff as I personally think it warrants.