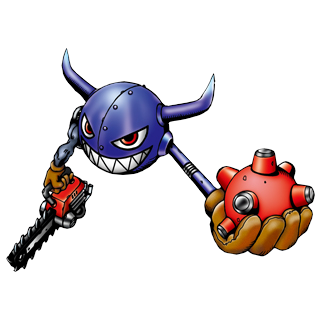 In the third version of the Digimon Virtual Pet, this little guy took over the role of Mamemon and Metalmamemon as the "tiny but powerful" Perfect evolution option, but while Giromon has been seen working with Mamemon in the anime, they aren't technically considered the same family of monsters. Instead, Giromon is a fully mechanized vaccine Digimon whose job is to defend computer networks from all potentially harmful intruders. I generally really like how menacing Giromon is, especially for an anti-viral Digimon. With its chainsaw, bombs and devilish face, it feels like it should have the personality of an edgy 90's antihero like the Punisher or something, going totally overboard with violence usually unbefitting one of the good guys. In its original appearance, Giromon could even evolve from Bakemon, which means that a sadistic hunter of viruses used to be one of the most pathetic virus types out there, and also sort of rose from the dead in the process. 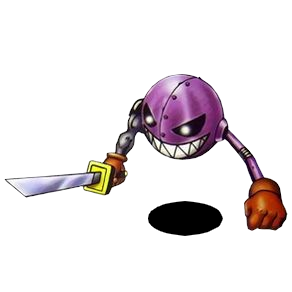 A little later, in the sixth virtual pet, a variant on Giromon showed up by the name of Tekkamon, but all we know about this one is that it was apparently created by an evil hacker as a virus-type rival to the real Giromon. It's funny that the "evil version" would be so much less scary, armed with only a machete and lacking even horns. They're supposed to be evenly matched regardless, but instead of a bombing attack, Tekkamon just has a headbutt. I want to say I'm less impressed, but that has to be some headbutt.

Unfortunately, these are yet another case in which some very cool and interesting perfect-level Digimon have nothing appropriate to evolve into. You can probably tell by now that most "perfect" Digimon were originally conceived as just what they sound like, a complete and final evolutionary form, but they just had to go and add another level to hook more fans, I guess, and the result is a whole lot of great concepts reduced to nothing but nonsensical intermediate stages. Giromon and Tekkamon tend to evolve mostly into things like Angemon or other humanoids dominating the Ultimate-level pool, and the more these reviews go on, the more feel like the addition of this level did nothing but screw up the whole franchise.