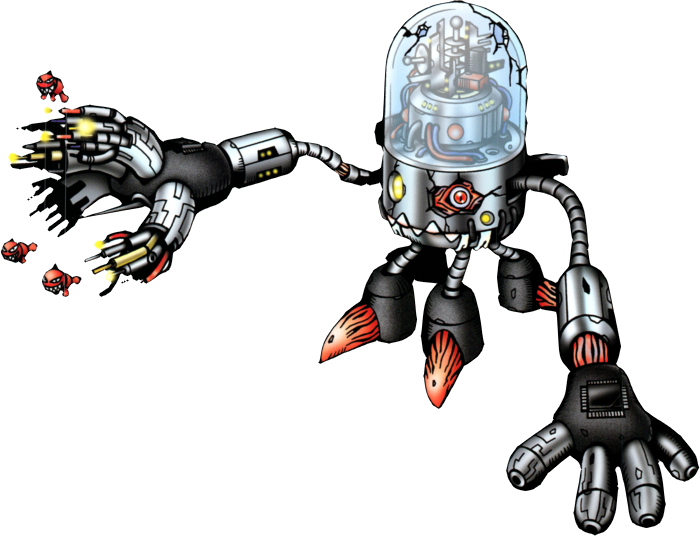 It's another of my personal favorites today, though this Digimon only really grew on me when I found out what it could evolve from and into in Digimon World: Dawn and Dusk, games I'm going to be playing for myself soon for the first time ever! Those evolutionary stages have little overtly in common with it, but we'll be reviewing them on their own down the road, and you already know what they are if you ever read any of my older Digimon articles.

Like the subjects of our last two reviews, Datamon was the "tiny" Perfect-level in one of the original virtual pets, appropriately known as Nanomon in Japan but probably changed to Datamon in English to avoid confusion with Nanimon. The idea is that this Digimon represents "nanotechnology," even if that really refers to microscopic robotics and Datamon is still at least a couple of feet tall. It does produce even smaller digital "bugs" from its virus-riddled body, but even those are visible to the naked eye, so maybe they deliver even tinier machines themselves? Whatever the case, I love just how screwed up this little guy is. He's supposed to be a vaccine Digimon that was transformed into a virus type, and he really looks like a robot that's been busted and repaired one or two or ten too many times, with those same grotesque organic features we've seen in a few other machine types. My favorite feature of course is the organic eye, but I think I'd like him even with two of those glowing yellow robot ones; he's just that cool. Datamon is also, apparently, a big ol' nerd, having appeared in the anime as a maniacal one-off villain and later as a somewhat friendlier but still antisocial shopkeep who plays video games in a dingy back room.