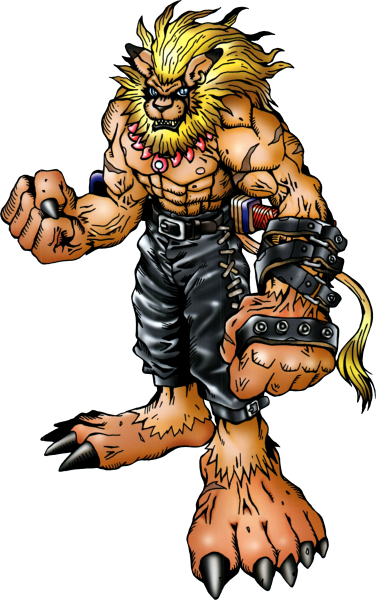 Until Weregarurumon showed up, Leomon was the buff hero furry man we were originally introduced to, and considered the heroic rival to Ogremon. In fact, Ogremon believes he only exists to defeat Leomon, but of course, the two form a grudging alleigance for the greater good in the Adventure anime.

As a design, Leomon isn't really my kind of thing, but he serves a purpose, and apparently, his sword (you can just see it sheathed on his waist) is sentient. This is just never mentioned anywhere but his official profile. 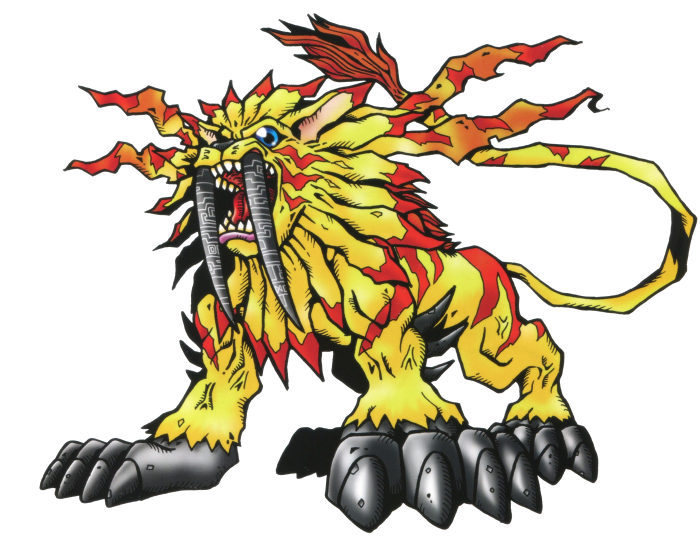 Nothing much for me to say about Leomon's Ultimate form, which he evolves to directly in Digimon Adventure, skipping any of the (very boring) Perfect Level options that would only be introduced later. Saberleomon is a nice design if you're all about lions, kind of a feline take on Garurumon's design. 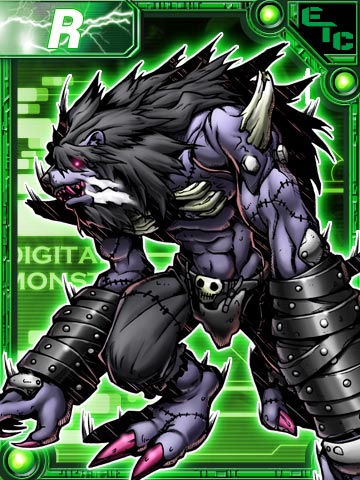 So, NOW we're talking. This thing is terrifying! Its level is kind of unclear, considered an adult stage in some sources and a perfect stage in others, but it represents Leomon losing himself to raw power to become a thoughtless killing machine. Funny that between the two rivals, it's Leomon who can go the most disturbing route, looking as if that mutant dog kid from Fullmetal Alchemist grew up and joined a death metal band. Love the tiny, glowing eyes and the horrible exposed ribs! Madleomon appears mostly in Digimon Fusion, a series in which it turns out that absolutely any and all Digimon can fuse into limitless possible new forms and would drive us absolutely up the wall to try and fit into our reviews with any regularity, but for just a taste of it, this here is "Armed Madleomon," which consists of Madleomon after absorbing at least three other, totally unrelated Digimon that have nothing to do with either chainsaws or big metal gloves but apparently become those very things in the process. Armed Madleomon's main attack is literally named "The Lion Sleeps Tonight" and is described thusly:

"Chops things up without caring whether they are alive or inanimate, while looking as if it is trying to completely shake off its arm and detach the chainsaw. The Lion "Sleeps" when its hunger is satisfied, that is, when it has preyed upon an opponent. In order for the Lion to sleep, it must also defeat that opponent." Another fusion consists of Madleomon and three "Apemon," which results in an even more bestial, more muscular, still shaggier Madleomon because apes and terrible animals. Finally, there's "Orochi Mode" Madleomon, fused to an "Orochimon" which you may have guessed is a multi-headed snake. Leomon does NOT look like he's enjoying any of this. Not at all. These additional fusions don't generally get full-blown Digimon Species treatment, unfortunately, showing up in the anime as though written on the fly and rarely breaking out into tcg cards or any other appearances, so don't expect me to include Fusion stuff all that often. Only when it's really important, like a sad monster kitty whose arms and legs all turned into snakes.