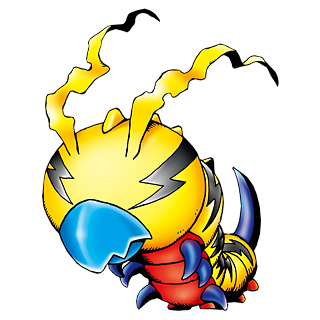 Today, we have a child-level Digimon originally introduced alongside Patamon in the third virtual pet, actually making this little worm one of the original six child Digimon ever released. Unfortunately, this particular virtual pet offered no larger arthropods for Kunemon to evolve into, but could evolve into the debut appearances of Ogremon, Bakemon, Shellmon, Sukamon or the mole, Drimogemon, which we'll review sometime later, and some of these could go on to evolve into either Andromon or Giromon, in case you still didn't realize just how messed up digimon evolution charts can be.

It's too bad that Kunemon is otherwise so forgotten and overlooked. A wormlike larval insect Digimon is a solid concept, but it's one that we'll be seeing again later in a more popular, more marketable form that has unfortunately overshadowed this eyeless-looking, beaky grub ever since, and I feel bad saying I do prefer the later "Wormmon" as an insect design. Kunemon has a lot of features I should find extremely cool, but something about it just isn't QUITE there. Maybe the electrical motif isn't quite "me." Maybe the beak just isn't as appealing as actual mandibles would have been. I don't know. I really, really want this to be one of my favorite Digimon, but it's just somehow missing something. I will say that I like its poisonous cousin, Dokunemon, marginally more not only for the poisonousness but the fact that green and purple are my kind of color combo. 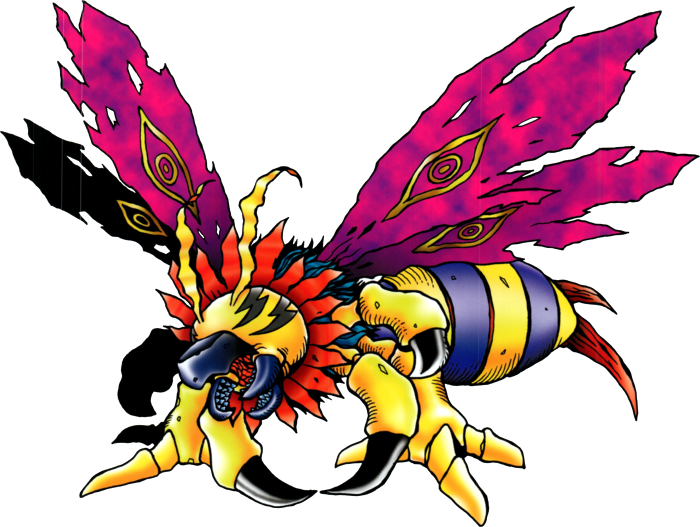 So, oddly enough, it's quite clear that this Digimon was designed as an evolved form of Kunemon, but it doesn't appear until a couple of virtual pets later, evolving from something else entirely that we'll be reviewing later this week. Since then, of course, Kunemon and Flymon have been more directly linked in various game appearances, though they both remain rather obscure. It seems like these poor bugs are almost nobody's favorite Digimon, and again, I wish I could say they were mine. This is clearly more of a wasp than the promised fly, and I may like wasps, but I love flies, and it seems doubtful we will ever get a proper one in Digimon form with this Hymenopteran hogging the name.

Still, Flymon does have a lot of neat characteristics. Some great looking arthropod limbs, a cool frill. REALLY cool wings with creepy eyespots, and a jaw structure that appears to have been lifted from a graboid!