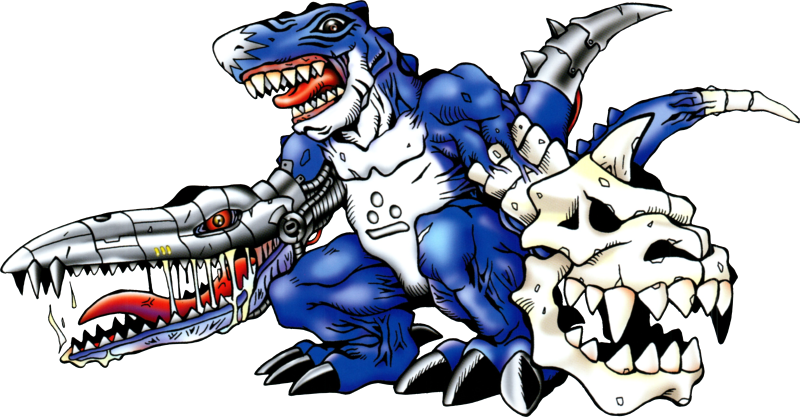 This was a Digimon I constantly overlooked in the early years of the series, and for a long time, I just sort of assumed it was a higher level than the adult stage. It's dramatic and weird enough to at least be perfect level, isn't it? These early monsters usually followed a pattern in which the adults were relatively straightforward, usually completely organic beings while the perfect forms were unnaturally mutated or cybernetically enhanced.

Deltamon is said to have fused from three Digimon when a computer was fried in an electrical storm, and would be more powerful if its three heads weren't too "fiendish" to cooperate happily with one another. Do multi-headed monsters who bicker and fight ever get old?

Deltamon's design is pretty nice, too. There's a subtle shark-like quality to the central head that's just a lot more interesting than your typical dinosaur Digimon, the left head (Deltamon's left, not your left) seems to be based on Skullgreymon, and the right head is some terrifying, slobbering, cybernetic mosasaur, or something, that we've never seen anywhere else.