Not doing these reviews in any particular order, you don't know how hard I debated when exactly to drop each of my top favorites. We're actually already through almost half of them, and today's entry is my undisputed #1 Digimon of all-time, ever. Was it a good idea to burn through the ones I'd most enjoy writing about, this early on? Probably not, but it doesn't make that big of a difference when I've already reviewed Raremon at least half a dozen times before I ever decided I'd do a Digimon review series at all. Let's talk about why! 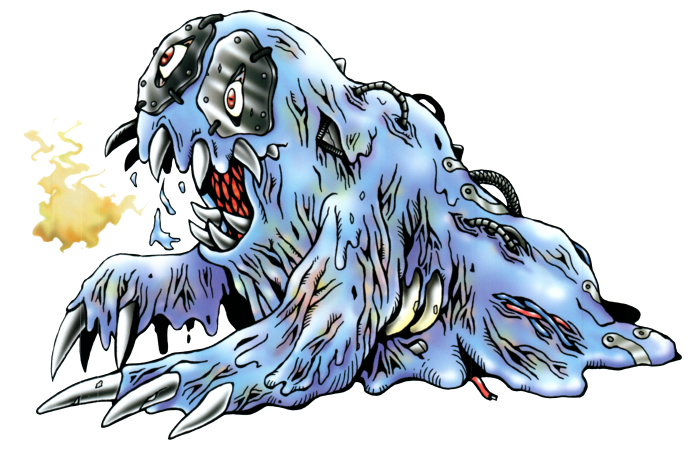 This beautiful, beautiful thing is not only another of the "failure" evolutions, but the very largest and most "serious" of them. No toilet humor this time; just a gargantuan, terrifying abomination of diginature. As we've mentioned before, there was a time when cybernetic digimon were almost exclusively perfect-level evolutions, the idea being that they were a powerful but unnatural extension of the adult stage and that it took quite a bit of evolutionary power to stabilize such a dangerous form. You can probably begin to guess what's wrong with Raremon. 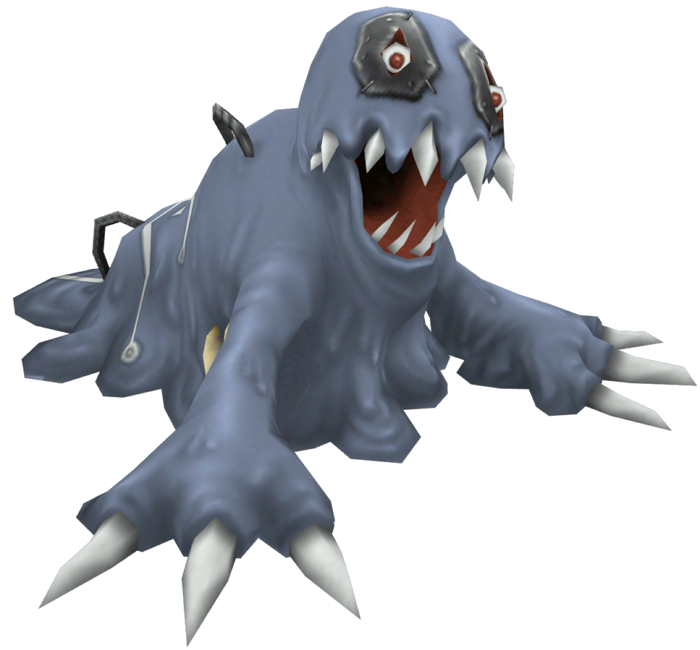 As an adult-level Digimon, Raremon represents a child-level attempting to rush its evolution into something more like Metalgreymon and failing about as hard as that can fail. Categorized as an undead rather than cybernetic Digimon, this crawling heap is said to be completely mindless and perpetually decomposing, unnaturally held together and animated by its barely-functioning cybernetic components!

Not to be mistaken for an amorphous slime or sludge-based creature, Raremon is more like a solid but very squishy, blubbery, soggy corpse, similar to what a cryptozoologist would refer to as a globster, and in fact, many of Raremon's possible evolutions are sea creatures ranging from an actual whale to the cthulhu we reviewed a ways back!

Obviously, the thing smells just awful, and its primary attack is known as the "Breath of Decay," a slightly misleading name for what consists of Raremon just plain vomiting an avalanche of green acid. 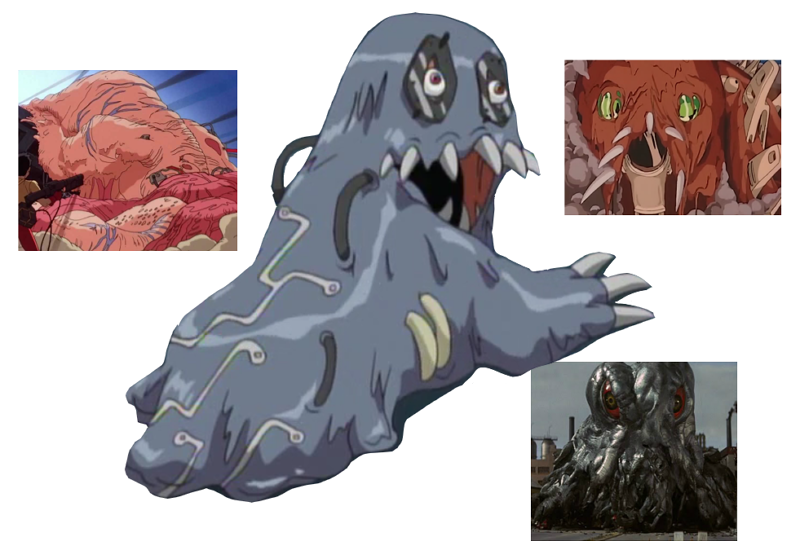 In both design and concept, Raremon seems to remix aspects of several other blobby, nasty wads from Japanese media. Hedorah, from Godzilla vs. the Smog Monster, is the most obvious, with Raremon almost getting the name "Hedoromon" in the original virtual pet release. The rotting God Warrior from Nausicaa is another clear inspiration, and the many bits and bobs and circuit-like patterns in Raremon's mushy hide seem to come straight from the mutated Tetsuo in Akira's climactic scenes.

Despite these direct references however, Raremon always felt to me like a truly original and worthy new entry in the hallowed tradition of these Horrible Heaps. A quality mashup, and I think the one thing tying it all together and really setting it apart is just those damn eyes. 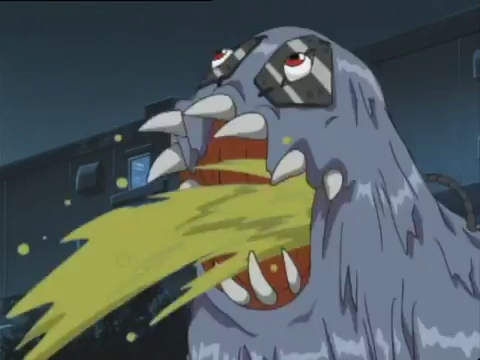 The visual effect of those tiny, lidless, too-human eyeballs surrounded by misshapen patches of scrap metal is FAR too cool, and especially far too cool when they're crudely stapled to this particular pile of carrion above that particular, horrible, gaping maw. As simplistic as it is, Raremon's face is immediately distinct from any other monster I can think of, and it perfectly communicates the kind of brainless, ghastly mistake of evolution that we're supposed to be looking at. 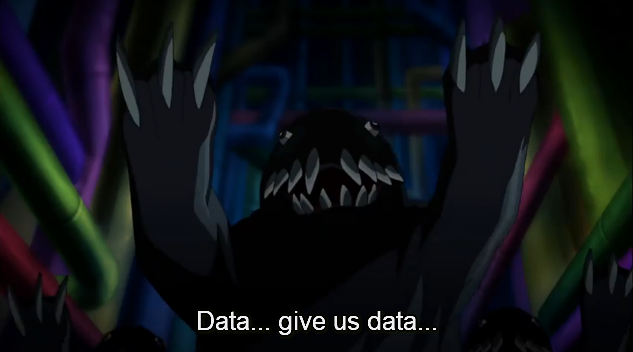 Raremon's anime roles have been sparse, but its first appearance in Adventure is well remembered by fans for the frightening tone of its battle with Kabuterimon, even dragging the beetle underwater to slowly drown it. Later, after more sporadic and minor parts in other anime series, Raremon would appear in Digimon Fusion or Xros Wars as an entire horde of mindless, data-hungry zombies! These unfortunately still only appear for around a minute of the episode, but in this continuity, they're simply what's left when any regular Digimon is drained of too much data, and oddly enough, aren't a whole lot larger than a person this time.

This is actually somewhat similar to Raremon's role in the first and last Digimon MMORPG, "Digimon Battle Online." Surprisingly, all other failure evolutions were oddly excluded from this title - even classic Numemon! - but any Digimon in the entire game, of any unevolved level, could screw up into a "level-less" Raremon! I really like the idea of the failures as something completely outside the usual evolutionary stages, and it's too bad it wasn't implemented elsewhere in the canon. But why do I, personally, love this Digimon more than almost any other? Why is it so high on my list of favorite creatures from any franchise? I don't know what intrigues me so much about creatures that are slimy, rotten and malformed. To some degree that's kind of common, given the popularity of so many mutant and undead creatures throughout popular culture, but those are usually deadlier, more wicked looking creatures than this saggy pile. Raremon's clumsy body plan and vacant, gaping stare give it an underlying "dopiness" that makes it more horrific in a more "pathetic" than "cool" way, and that's not a combination a lot of other people seem to be into, but it's an aesthetic I've always been fascinated by. Raremon is a thing that isn't supposed to exist, an evolution that's basically a punishment for a Digimon's hubris, and it really looks the part! 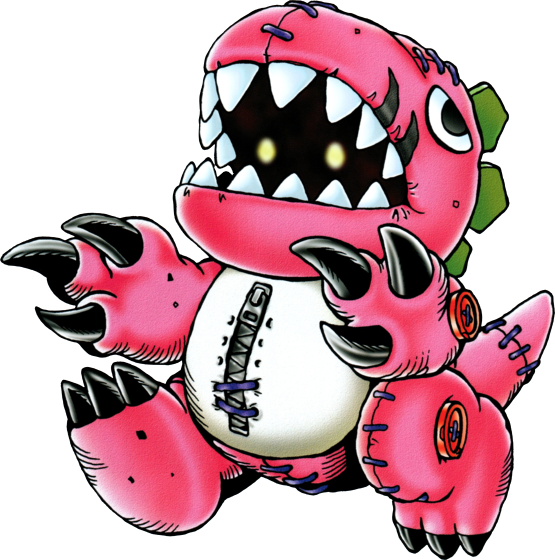 Alas, like Numemon and Sukamon, Raremon's charm is as fleeting as a beautiful flower, as its most official evolution is a wildly different entity and once again a giant, colorful plush doll with exceptional fighting power. I'm obviously glad that if we had to go that route, we get one of those Jawa faces out of it, and it's even a Jawa face inside a "mouth," which is at least two of my favorite design tropes in one. 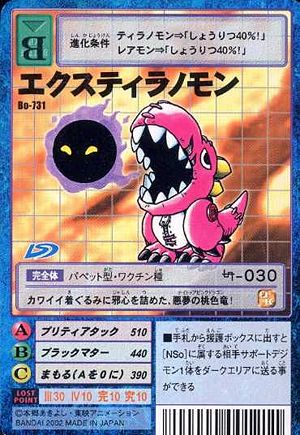 Sadly, there's no official word on whether a Raremon still operates Extyrannomon the way Monzaemon is puppeted around by a Numemon, and one TCG card even shows us that the being inside of Extyrannomon has been reduced to a simple, black sphere. 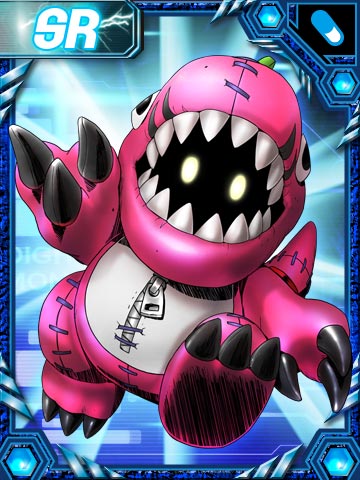 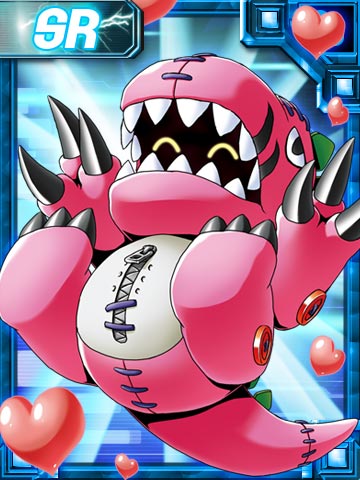 Still, I can appreciate the notion that somewhere, deep down inside the gangrenous mess that was Raremon, there was still something conscious enough to want better out of life; that after screwing up its cyborgification that badly, it made one more effort to pull itself together and become something both more formidable and more huggable. Hedorah in Godzilla cosplay, learning for the first time how it feels when people like you. 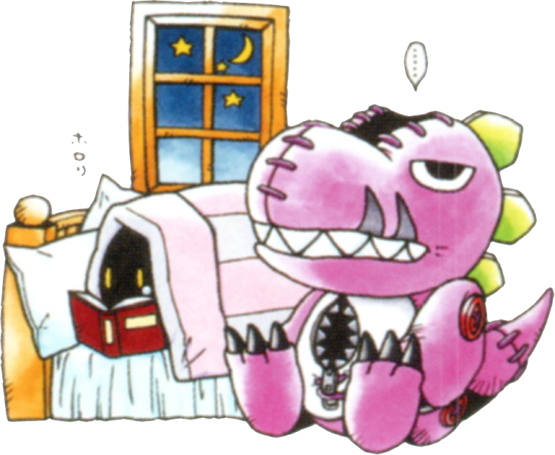 And if you're still not really into that, we did mention that some games evolve Raremon into Dagomon, while other known options include Skullsatamon and even the lovable Datamon, which I always felt was Raremon's most appropriate and thematic evolution; from a giant, rotting cyborg failure to a tiny cyborg genius who's still not quite stable.