This is another really fun one, today, and exactly the reason why we just reviewed Flymon, Cyclomon, Deltamon, Tuskmon and Raremon all in a row, as I'll explain shortly! 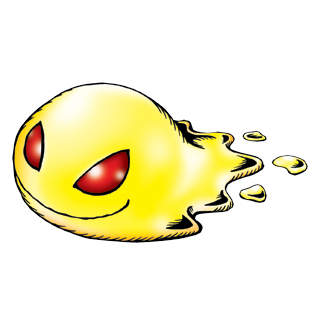 Digimon V-pet Version 5 was basically the "bad boy" of the original line, consisting primarily of virus type Digimon even as far back as its baby stages, with Zurumon here being one of the meanest and rottenest of all hatchling Digimon! Its slimy form is apparently poisonous enough that even fully evolved Digimon prefer not to mess with it, just like a lot of small and frail but highly toxic critters in the real world! 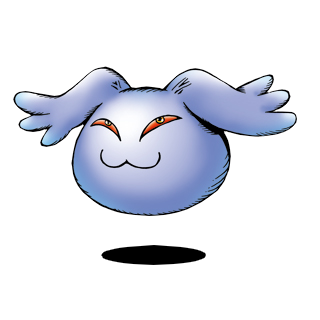 Zurumon then evolves into Pagumon, likewise the first Baby II Digimon to be given a vicious, spiteful personality, said to mercilessly bully other baby digimon and work together to prank even stronger monsters. It's also still poisonous, producing the same bubble attack as most other Baby II stages but laced with toxins that result from its sheer "spite." That's adorable.

By now, of course, Pagumon can evolve into over a dozen different Digimon across various games and cards, but originally, it was designed for only two possible child stages. 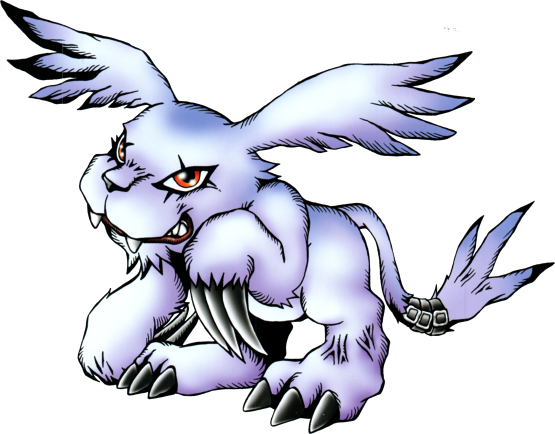 Gazimon here is the most direct and obvious metamorphosis of Pagumon. It's hard to pin down what kind of animal we're supposed to be looking at, at first, with aspects of both carnivora and lagomorpha, but that's because it's not necessarily based on an animal, which we'll also get to shortly. At the time, it was the first fully mammalian child stage to stand on its hind legs, which was said to be so it could use its exceptionally sharp claws as weapons.

Gazimon carries the same mean streak it did as a Pagumon, using those claws to dig pitfall traps and supposedly never forming any real friendships, watching out for its own needs above all else. Naturally, this made it a wildly popular choice for the main partner of countless fan characters, either reflecting its human's loner broodiness or as a more ironic matchup with a sweet, nurturing kid who eventually finds the good in Gazimon's black little heart. I'm not bringing this up to poke fun at it, you are absolutely lying if you say you've never loved that kind of dynamic. 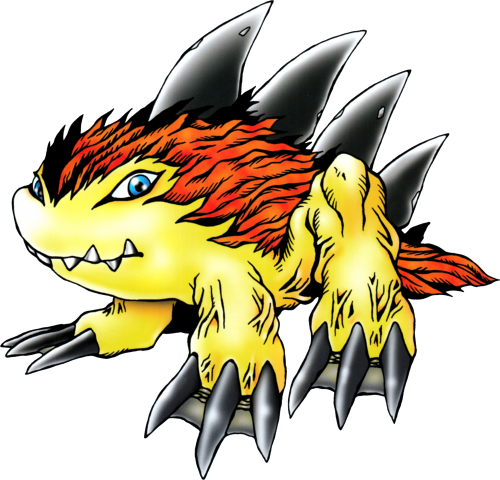 Pagumon's other classic evolution doesn't look anywhere near as similar to it as Gazimon does, but you can see by the names that they're meant to be complementary to one another. Basically a toad with hair, fangs, claws and razor-sharp back spines, Gizamon is said to be ferocious in water but timid on land, at least when it's all alone. It seemed pretty bloodthirsty out of the water in its one major anime appearance, but that was a fairly large horde of them against a few hapless humans, so it's probably bolder in packs, like toad-piranhas. Gizamon is also capable of rolling up into a "wheel" with its nasty back blades, and that's also about to be significant. How do Gizamon and Gazimon work as a thematic duo, other than their pugnaciousness? Let's see! Compare them side by side, factoring the creator's love of American horror, and it seems like a no-brainer that Gazimon and Gizamon are loose homages to two tiny terrors of 80's cinema: the wildly successful Gremlins and their more cult competitor, the Krites of Critters, which it should be noted can also curl up into balls and hide nasty spines in their fur!

This isn't the only way in which these two Digimon reference monster movies, either, and that would be why we reviewed the particular Digimon we did as we built up to this entry:

At some point or another in our reviews, we've covered all seven of the original adult stages featured in V-pet 5. Gazimon could evolve into Darktyranomon or Cyclomon, Gizamon could evolve into Flymon or Deltamon, and both of them could evolve into Devidramon, Tuskmon or wonderful Raremon, and if you're a big enough monster nerd, you probably already noticed that these sprites, taken as a set, match up to Godzilla, Gigan, Mothra, Ghidorah, Destroyah, Spacegodzilla, and of course Hedorah.

You guys have been reminding me of all this every time we posted any of these evolutions, but give me at least SOME credit; I just wanted to cover it under this entry because, in most cases, these Digimon have almost nothing in common with these classic kaiju beyond such superficial similarities as "being an insect" or "having spikes." You can't really, rightfully say that Devidramon itself took any inspiration from Destroyah or that Tuskmon is even vaguely any sort of nod to Spacegodzilla.

The idea that these seven Digimon symbolize Godzilla and a selection of Godzilla's nemeses really feels, to me, like it's much more a part of Gazimon and Gizamon's lore. Almost all Digimon can evolve into what are basically kaiju, but these early sprites serve as a little wink and nudge that Gazimon and Gizamon most especially evolve into kaiju, and that's especially fun given that they start out as homages to two of the smallest movie monsters of their era.

A Mogwai becomes a Gremlin when you mess up enough as a pet owner. How much harder must you break the rules for King Goddamn Ghidorah to subsequently burst out of your house? The cinematic crossover event you never knew you wanted.