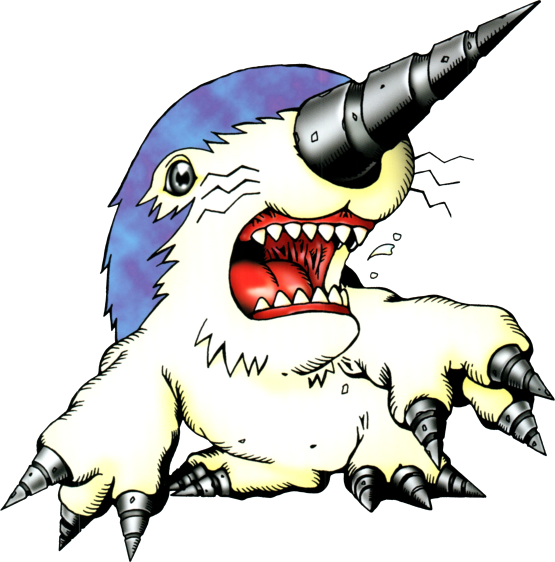 The only mole-based Digimon and one of the very few burrowing-themed Digimon has always stood out to me as a design, partially because it doesn't even look as much like a mole as it does a shaggy, clawed narwhal. I don't know what it is about bulbous, whale-shaped creatures that are not actually whales, but they're always really appealing to me, and so is the trope of a mole monster with a drill for a nose. Drimogemon even adds drill fingers! Not to mention those cool teeth and gums almost hearken back to Tokomon. Considering that it is one of the longest-running Japanese cartoons of all time, I'm about 80% positive Drimogemon and many similar monsters are all homages to Mogurin, the mole-themed mecha of Anpanman's nemesis, Baikinman, a character I talked about as a Halloween feature because the same Halloween was the debut of my medical webcomic and we did a whole germ and disease theme that year. It was great!

Almost everybody in Japan watched Anpanman at some point in their early childhood, so it's no surprise that its imagery might creep at least subconsciously into one creator after another, though we also know how Digimon's dad is big into completely overt pop-culture references. Though there's no older or younger Drimogemons to evolve into, there is an odd variant, Nisedrimogemon, which seems to exist just as a joke. Instead of whiskers, it has a curly mustache, and the "Nise" or "imitation" in its name refers to the fact that this mustache is the one and only difference. Both Nisedrimogemon and Drimogemon's official profiles note that if Drimogemon had been discovered first, it would have been given the "Nise" in its name! Finally, here's some adorable artwork of Drimogemon finding a bone that Garurumon had buried, then throwing it away because he "doesn't need it." This is actually a part of Drimogemon's lore; it really finds bones that are buried by Garurumon often enough to be mentioned in its profile, and throwing them constitutes one of its main attacks!