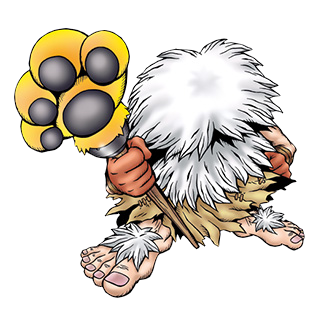 I kinda like this little, shaggy caveman! He's a possible evolution of Piccolomon, but I thought he was different enough to warrant his own entry along with his female counterpart. I always like designs whose features are completely hidden by fur or hair.

Jijimon is said, of course, to be one of the most ancient of all existing Digital Monsters, but of course, in our timeline that means he's still only as old as the invention of computer networks. Time passes differently enough in the Digital World, under certain circumstances anyway, that Jijimon may still have lived the equivalent of thousands of years in the few decades since we accidentally spawned his universe. 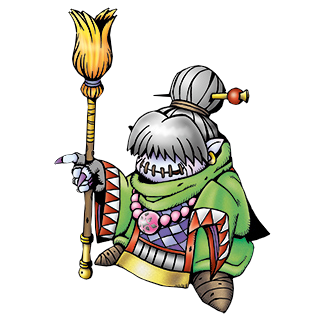 Babamon is often depicted as Jijimon's wife, and clearly the cooler of the two. She's another of those pointy-eared, noseless, stitchy-mouthed humanoids like Wizardmon, but her eyes are completely hidden, which is always a neat look, and she's a fully evolved witch-like Digimon, so she gets the same bonus Halloween points as Witchmon.

Of note is the fact that she wears the same orb around her neck as Rosemon, and is rumored to actually be a Rosemon that lived for many centuries and digivolved into a new form!