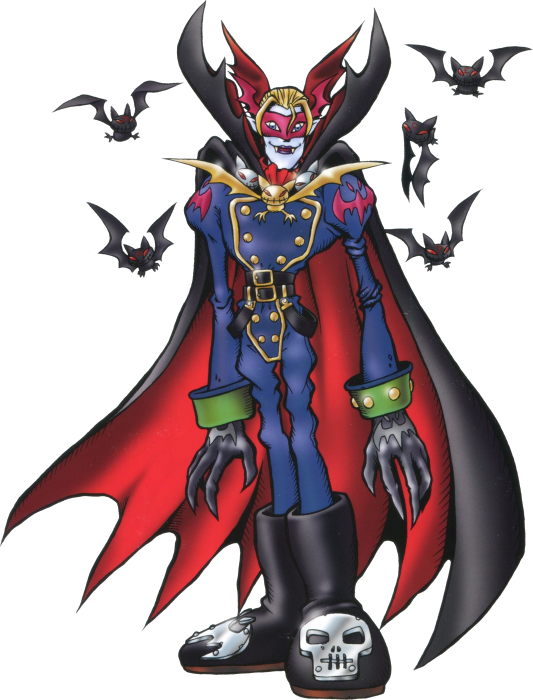 Guess we've put this guy off long enough. The anime artwork really doesn't look as good as most official digimon art, but it's the only larger-sized illustration I can find, and such a major villain of the series kind of demands more than a 320-pixel square. Myotismon is actually a possible perfect level evolution of Devimon, but more vampire-themed than demon-themed, despite the Japanese name Vamdemon. It's hard to pick a favorite between his two possible names; they didn't want to call something a "demon" for English-speaking audiences I guess, even after "Devimon" was apparently fine, so they named him after Myotis, the genus that includes all mouse-eared bats but not, ironically, the vampire bats. Poser!

Myotismon is the first digimon villain to attempt an invasion of the real world, which raises a lot of questions about how exactly this stuff works. Digimon are made of computer data and their entire world is supposed to be a sort of metaphysical realm formed by our internet, or something, but apparently they can manifest in our world as physical matter anyway. Physical enough that Myotismon is even actually seen stalking, biting and draining blood from human beings!

I've not that much to say about Myotismon's design. He's got that fun early Digimon lankiness but he's otherwise just a vampire man. He seems to be considered one of the sexiest humanlike Digimon guys, but if I were gonna judge that myself I'd rank some of the Devimons and Wizardmon higher on that scale. 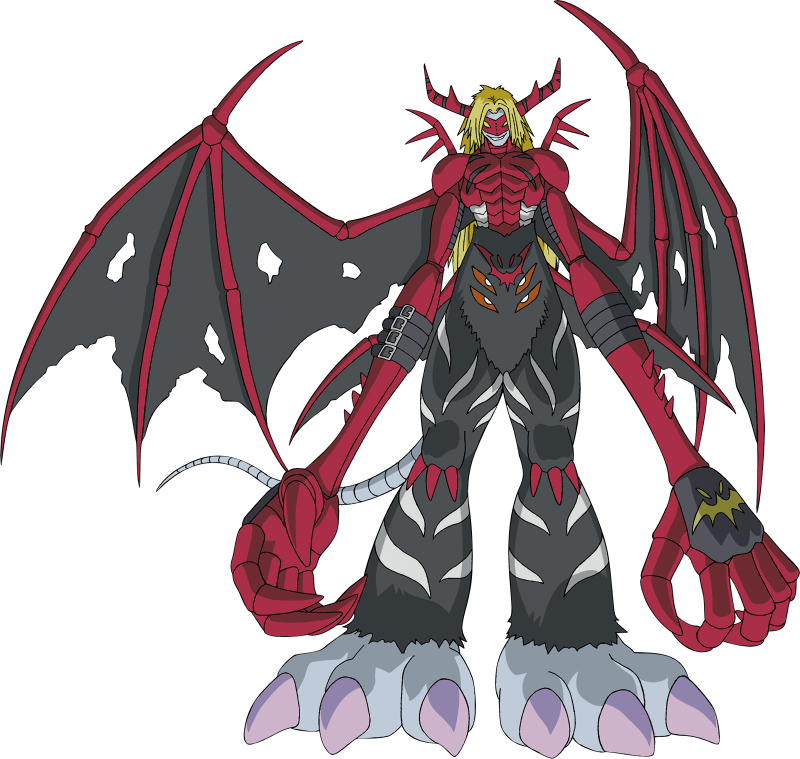 Also called Venomvamdemon, of course, which rolls much nicer, Myotismon is actually said to dislike taking on this form, because his sophisticated and gentlemanly mannerisms give way to a more brutal bloodlust he considers embarrassing. It's a pretty cool design for a big giant Dracula Satan, with a lot of what still make Digimon look so monstrous and wild. Nice skeletal parts, exaggerated limbsand tattered wings, and the relatively normal guy head with just slightly unkempt hair actually looks pretty cool on a body like this too. I actually wouldn't prefer this design a creature-head.

The anime, however, reveals that there's a much smaller "true form" inside of Venomyvampdemyotisism....

...Hiding inside of his crotch.

This is never further explained and isn't mentioned in any official profile or featured in any other artwork. Venommyotismon just had a little round baby devil-head Digimon in its groin, and that's its true weak point. There was a fan theory that it's probably the real Baby I or Baby II Digimon that Myotismon descended from, but those aren't usually hanging out like little parasites inside their evolved forms...are they? Nonetheless, it's pretty interesting and memorable. 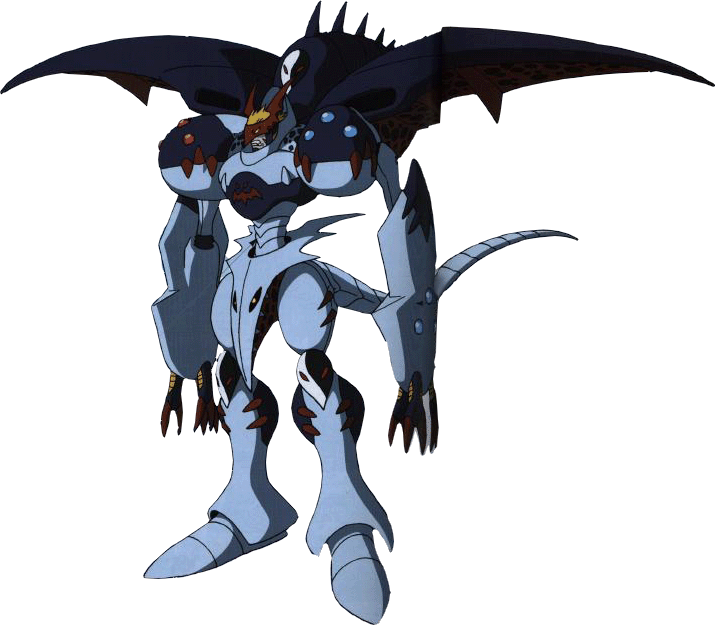 So, spoiler alert, another evolution of dracula turns out to be the true main villain of Season 2, and to be honest, I don't really care. I guess it's neat that he has mouths on his shoulders, which his official profile hilariously tells us are nicknamed Sodom and Gomorrha, and it's kinda funny how he looks like he has a manta ray on his back now, but otherwise, I just wasn't that impressed by this reveal back in the day and I'm still not impressed by the design. This was after Digimon took a shift away from organic shapes and textures, which at the time felt tied in with the new "armor digivolutions," but soon, the armor aesthetic took over the franchise almost completely, and it's never really felt the same.

Before more of those "what about..." or "you forgot..." comments flood in, other Digimon related or partially related to Myotismon will get their own reviews, for reasons I'll be giving in those reviews. Try to remember that I'm not going for perfect completion here (humanly impossible) but if a Digimon is even remotely cool to me, I'm including it. There just isn't any single, sound way to organize these guys.