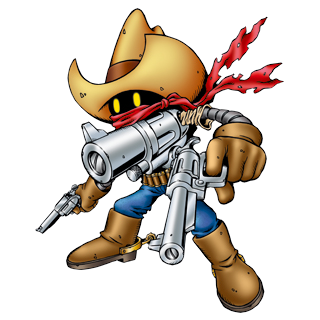 You know, we've almost COMPLETELY neglected the "types" some Digimon are supposed to have. Maybe because they don't have a major effect on anything, but it's worth noting that this Digimon here is considered a "mutant," and so are the majority of other Digimon with this type of face. The face that makes anything simultaneously cooler and more adorable to me, even a trope as old and busted as a cowboy.

Not just any glowy-eyed cowboy, though, because Deputymon, or Revolmon in Japan, is also one big giant gun. That's both very funny and just horrible. This Digimon by default is always aiming a gun directly at anyone it wants to socially interact with, which has to be at least a little awkward at best. At worst, I get a mental image of him trying desperately to explain something to a crowd of civilians who can't stop screaming every time he turns their way. Deputymon was in fact SO cary that some dubs saw fit to censor him...by making the gun bright blue and painting over the gunshots with lasers. Now, I'm no fan of real guns, but every single child in the world knows what they are, and almost all of them already play video games significantly more violent than anything cartoons have ever been willing to show them. It has never not been silly to hide the concept of bullets from kid's series, especially considering the fact that there's nothing actually making energy weapons less gruesome or brutal. Is it seriously only considered more acceptable because it's not a technology we deal with every day in the real world? Is that REALLY it? We still know what it represents. A gun is a gun.

Deputymon is not, however, a gun for very long. There aren't any bigger guns he can evolve into, or really anything very appropriate for him...EXCEPT that he can sometimes digivolve into yesterday's Superstarmon, which may have been designed as the evolution for en entirely different digimon, but, I strongly like the idea of a deputy monster evolving INTO a big gold star badge. Not to mention, becoming so tough he trades his guns for his bare fists.