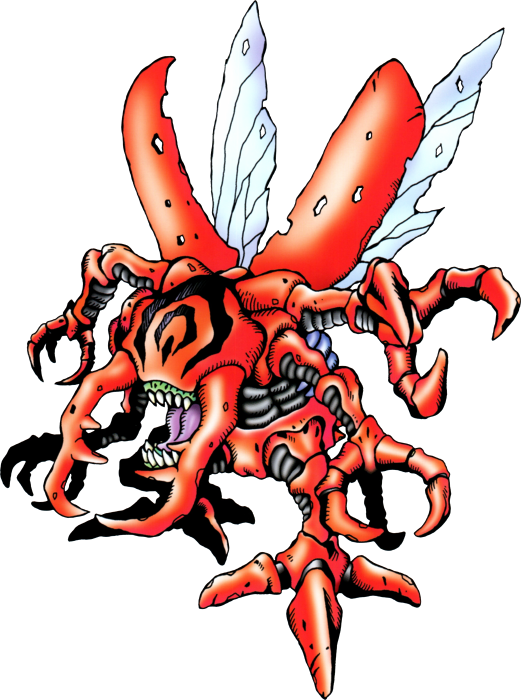 We've meandered enough around more minor Digimon, so let's do another chunk of related evolutions! The original child stage for this digimon was, of course, Tentomon, capable of evolving into either this stag beetle or the rhinoceros beetle that is Kabuterimon. It's a popular idea in Japanese fiction that these two types of beetle are blood rivals, and the actual beetle-fighting hobby, inspiration behind much of the Mons genre, seems fairly split on which variety is cooler.

Personally, I have to say that Kabuterimon is the better looking of the two major digibeetles, but I'm probably biased towards Kabuterimon's even more Gigeresque details. Kuwagamon is ironically the less evil looking of the two, but was introduced as a more brutal, wild enemy digimon in the anime as far back as the very first episode. Just like its rival, however, Kuwagamon's attacks are mostly electricity-themed. In fact, Digimons seems to heavily associate electricity with insect types, which is a neat idea. 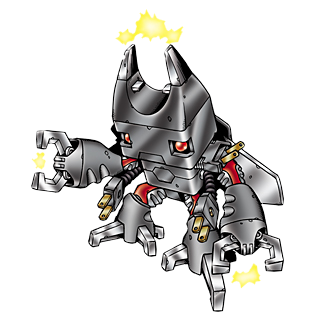 So, even though Kuwagamon was introduced as the evolution of an all-organic ladybug, we would later get this adorable, tazer-headed robot bug as an "official" Kuwagamon child stage. That this would be so much more mechanical than its adult form is rather odd, and makes Kokuwamon feel more like one of those neglected one-offs than part of a proper line, but I guess what we can interpret here is that this little mechanoid WANTS to be an insect, and is granted that by the magic of digital metamorphosis. 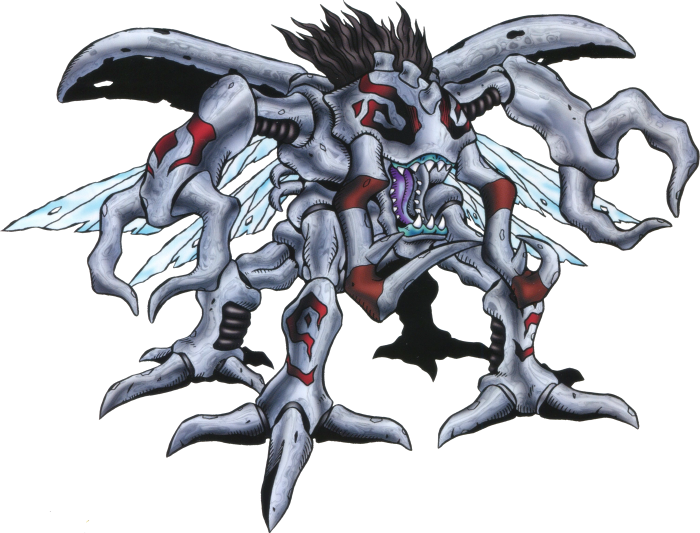 Kind of disappointing, to be honest. Megakabuterimon was different enough from Kabuterimon, but Grankuwagamon adds little more than a color swap. It's still cool, as any giant, fanged beetle creature is going to be, but...could have been better. I should also take this moment to complain again about how the majority of Digimon have NEVER had artwork released for them at any higher than this resolution. The larger images we've been using are from an art book scanned by With the Will, and it's not going to be long before we run completely out of those. 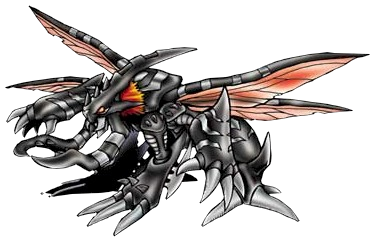 So, this at least changes the anatomy up, but honestly...I don't like this one as much as regular Kuwagamon, either. As a slightly newer digimon, its details are a lot smoother, cleaner, and just less interesting to me than its predecessors, and the addition of eyes knocks it even further down the coolness scale. All the other big beetly digimon are eyeless to better evoke their Alien inspiration. Now, we've got one with the fully swept-back head, but they had to go and stick cheesy demon eyes on it! 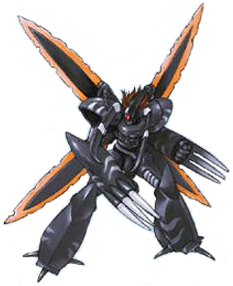 Eh, no, sorry, this is even less great. This guy showed up around the time 90% of new Digimon started really looking like either Gundams or Power Rangers. I'm not knocking either of those things, but...they're just not for me.