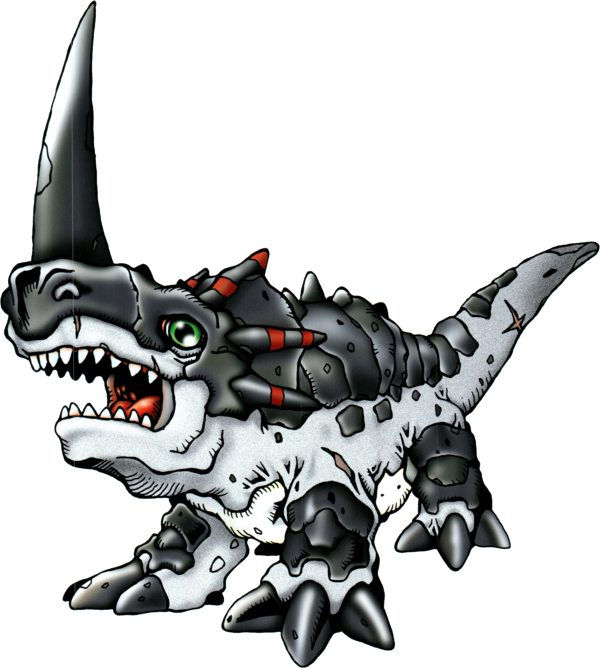 This classic adult digimon has probably been mentioned in the comments here more times than...well, more times than I expected, anyway, probably at least five different times, which is a lot more than any of the other long-forgotten digisauruses. People really seem fond of this one, and I can see why, if dinosaurian beasties are one of your favorite things. It's loosely based on a ceratopsian, but exaggerated into a much more lizardy monster, a sort of rhinoceros-armadillo with an oversized head and jaws, and a pretty cool color scheme. Its name references the fact that it's almost entirely black and white, except for the red highlights on its horns and its pretty green eyes. I think it might have been even cooler if it was TRULY only shown in shades of grey, but we can't have it all I guess.

Monochromon is oddly one of the only digimon that evolves into a higher-leveled palette swap of itself, which is known as Vermillimon. I guess it got tired of being grey and felt like looking worse. Sorry, Vermillimon, but black and grey is just a whole a lot nicer than that sort of Old Ketchup look you've got going. Still a whole lot better than just evolving into a guy in a weird suit, though. It might have been interesting if there were a whole range of differently colored evolutions here, maybe with a matching range of subtly different elemental attacks...sort of like dragons and their breath weapons in D&D? 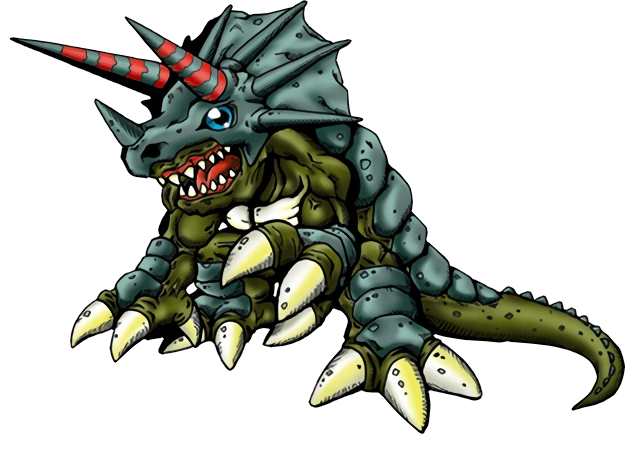 A "truer" evolution of Monochromon is the perfect level Triceramon here, and I do really enjoy how even the herbivorous dinosaurs get to look like vicious bruisers in this series, or used to anyway. I think Monochromon is still slightly more interesting for looking a little less like a particular dinosaur and more like a fantastic beast, but I really enjoy this bipedal ceratopsian, and this is an evolution option with a very pleasing color palette! 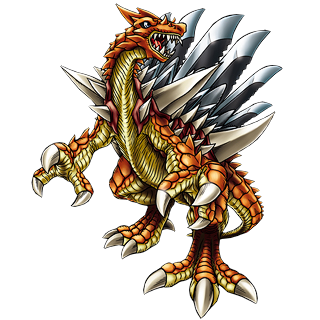 In 2005 - fairly recent history by Digimon standards - a new virtual pet introduced Spinomon, one of the few mid-2000's and later digimon to still have that lovely attention to fleshy detail, and Triceramon seems to be its most common evolutionary predecessor. It doesn't really look anything like its Spinosaurus namesake, like, AT ALL, but it's a pretty cool scaly dinodragon and I like how the bladed crest is just a bunch of massive military daggers or very fancy kitchen knives.

The progression from a big, burly, plodding, thickly armored herbivore to a super-bladed carnivore is a fun one, and I think it makes a lot of thematic sense; a sort of "shield to sword" transition, like it finally got fed up with just enduring everyone else's violence and wanted to know what it was like to finally be the stabber, rather than the stabee.