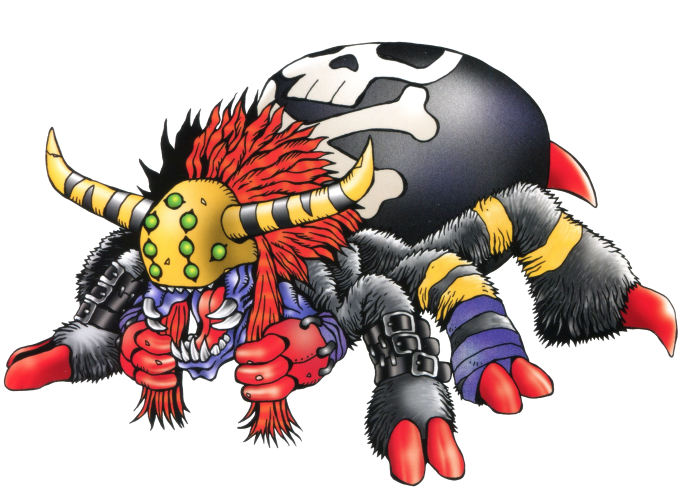 How about we just round out a "trio" of adult level bug digimon, shall we? Dokugumon even released the same year as Snimon and Yanmamon, filling the much-needed niche of a true arachnid Digimon, and it's as cool as any fan of both spiders and digimon could have hoped for. Honestly, just how much cooler could this design have gotten? You have the massive jolly roger on its abdomen, shaggy tarantula legs with stripes and belts and bandages, a mane of wild rocker hair, beefy humanoid forelimbs and that many-eyed, demonic looking mask topping the Violator-Giger jaw arrangement. Add to that the lore that this was once a gentle giant spider until a computer virus drove it mad and you've got a great, iconic digimon all around. Sadly, Dokugumon has what SHOULD be a perfect child-level form, Kodokugumon, but was officially declared a Baby II digimon at some point...and has had only two minor anime roles with no official gaming appearances, which would almost make its very canon questionable if Digimon had any concept of a canon.

If we are to consider this swell little spiderling an actual digimon, its baby status means it still has to evolve into something that is not a spider before it evolves back into full-size Dokugumon, and the most common child stage here is Dokunemon, the poisonous green worm. Digimon doesn't follow biological logic to begin with, no, and it shouldn't, but a little part of me can't help but wince that an insect larva winds up being the closest a spider has to an official prevolution. Another child level option, however, is a poisonous mushroom digimon we'll be seeing later, and while that doesn't make biological sense either, it runs with more of a "toxic" theme that's a lot of fun, if you ask me.

On the plus side, Dokugumon ACTUALLY has a Perfect-level spider digimon to evolve into, and she in turn can evolve into an ultimate-level arachnoid. These couldn't be more obvious or more "official" evolutions of Dokugumon, which is why we would usually review them immediately, but this time...both are so unique and special that they fully warrant their own more dedicated review pages. Sorry guys. I can't blow ALL the spiders in one shot.