ENTRY 050: THE DAY OF THE KILLER VEGETABLES FROM MAYBE SPACE 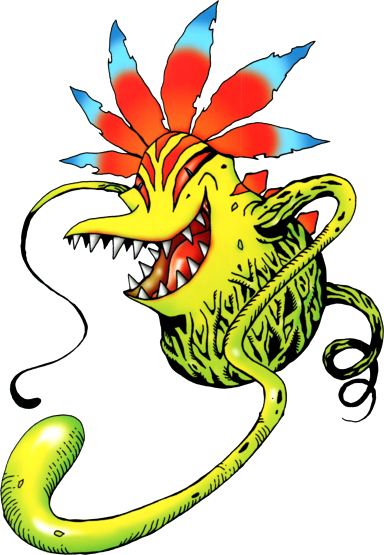 OKAY, I've been putting off another of my beloved trashmons long enough. I feel like doing one of my personal favorites - or an especially important villain - roughly every ten reviews might make for a good pace, wouldn't it? That gives me plenty of room to drop more obscure digimon or even some of my least favorites without getting too bored.

So, Vegiemon here was another of the original failure evolutions associated with poop, and it's a rather odd choice for one. The others all make sense as "gross and unloved" creatures, sort of, but this is just a cool looking plant monster with no overtly disturbing or unsanitary characteristics. If they'd made it an eggplant I'd have understood immediately, eggplants being the stereotypical "yucky, healthy vegetable" in Japanese cartoons, but there isn't even any particular plant that Vegiemon resembles. I guess the idea here is that Vegiemon is just an undesirable "weed" of some sort, and it's a PRETTY cool looking weed. It doesn't fall back on any of the more obvious plant monster tropes, resembling some bizarre veiny bulb with just a couple of tentacles and an almost bird-like head with such marvelously sinister eyes. What an utterly shit-eating face on this thing, in both the figurative and literal sense, though by way of being a plant, the coprophile slant is almost wholesome here. There's nothing disturbing about some good quality nightsoil if you're at all into gardening, though maybe Vegiemon's problem is that it has exceptionally bad taste even in crapola? Maybe it likes dog turds or other lower-grade fertilizer. Maybe I've spent too much time talking about this subject.

Perhaps the funniest thing about Vegiemon is that its debut Vpet appearance was as a possible failure evolution for Gabumon. I guess you definitely have to be a special kind of screwup if you're trying your absolute best to be the ultimate wolf furry and evolve into the wrong biological kingdom entirely. One more major point of interest is that Vegiemon has a variant, Red Vegimon, with much more going for it than a mere color shift. This is supposedly a "fully ripened" Vegiemon, the truest and healthiest form it can take, and now attacks with a "putrid, poisonous breath" like many of my favorite monsters. Personally, I like both these vegetables equally. Red has a bigger, even toothier mouth, slightly different, smaller eyes, a smoother body and those cool thorny bulges on its tentacles, but I still love traditional Vegiemon's more decrepit appearance. And, hang on a second, what's going on here? Vegiemon's official bio says that it eventually blooms and produces a "fruit," but this doodle is the only example we've ever been shown, and that "fruit" has a very, very particular appearance to it... 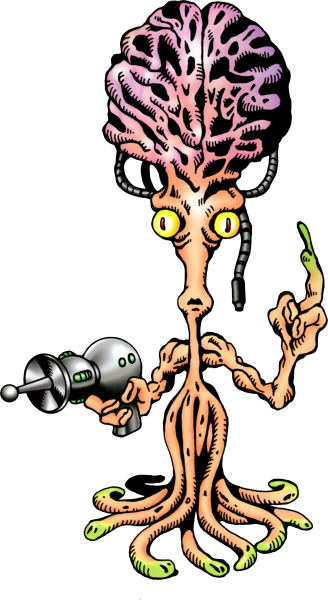 Yes, the official perfect evolution of Vegiemon - its equivalent to the likes of Monzaemon, Etemon, Digitamamon and Extyrannomon, is this absolutely wonderful martian invader complete with tentacles, buggy eyeballs, a B-movie raygun and a huge, purpleish, exposed brain! The electronic cables are also a nice touch, especially how one of them is always shown disconnected. I'm not sure exactly why they decided a space alien should be the evolution of a noxious little plant. Maybe it's a "pod person" reference. Maybe it's because a "weed" is kind of an "invader." Maybe it's purely because both have tentacles. Whatever the logic, it's a pretty fascinating idea, with Vademon's official description stating that it is "shaped" like a space alien but "rumored" to have sprouted from a seed! Because the original "failures" were all just re-skins of Numemon and their evolutions were all just re-skins of Monzaemon, Vademon was yet another whose attack animation resembled a flying heart. The heart thing made sense for a teddy bear, a rock-singing monkey, a stuffed purple dinosaur (wait...is Extyrannomon a BARNEY joke!?) and I guess for a big tamagotchi egg, but it's a little tougher to tie it into Vademon, who's apparently just blowing kisses when he uses the move. Is it some kind of tentacle joke? He doesn't really hit any of the design tropes that read to me as that kind of tentacle monster.

All I know is that the anime Vademon spoke in a falsetto voice with dainty hand gestures and other "effeminate" behavior, which feels like a cheap gay joke and that's an ongoing problem with cartoon villains, but at least Vademon doesn't have to be a villain. You can, in theory, be best friends with a gay tentacle monster who wants you to believe he came from space...and who wouldn't want to be? He's still supposed to be a highly desirable evolution, at one time one of the most powerful digimon possible. No wonder they painted him like this in the new Battle Spirits card line: 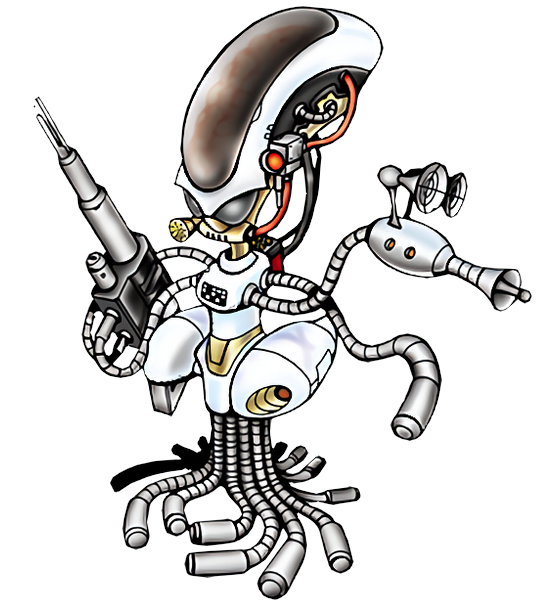 We've got a nice, happy ending for this Digimon, too, entirely thanks to a fan artist whose entry won a 2002 design contest and permanently cemented a fully-evolved space invader into series canon. Granted, this is a very very different creature from Vademon and I'm usually not as big on mechanized evolutions, but this is just SUCH a cool, menacing, otherworldly tentacle-bot that it easily manages to make my favorites. All those speakers and scanners and hoses and vents are SO neat looking together, the asymmetry is a ton of fun and the clean, white chassis gives the whole thing a disturbingly sterile, medical sort of feel, like you know most of those things coming off of it are designed to be inserted into something else's orifices. What's also great is the fact that, in every official image I know of, you can still faintly see Ebemon's organic brain through its elongated, alien robo-skull! If you're a big UFO geek, or really anybody with good taste, I'm sure you'll appreciate the backstory that this is, in fact, a Vademon artificially altered by experiments conducted at Area 51.

It wasn't aliens they captured at all...IT WAS A DIGIT MAN!!!