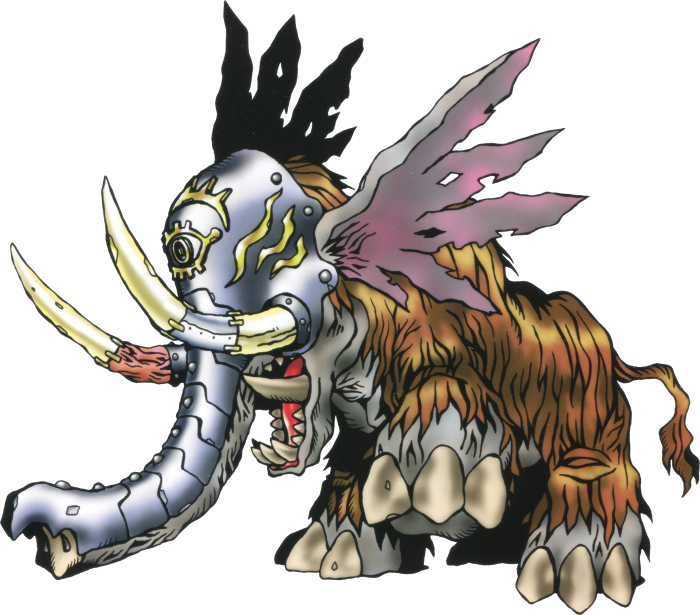 You gotta love a scary pachyderm. They're already intimidating for their size, but it's rare that a mammoth or an elephant gets to be this completely monstrous, which is wonderfully par for the course in our reviews so far. Mammothmon is said to be an ancient, mostly extinct digimon, however the heck that works in a world created by recent computer technology, and has a vulnerability to extreme heat. I like how its tusks are stapled together in different sections, including one segment covered in meaty flesh, and the mask completely covering its eyes looks even cooler here than it does on so many other mons. Apparently, the eye insignia on the mask actually allows Mammothmon to see, but only "far into the future!"

Interestingly, Mammothmon is a perfect level that can evolve from Drimogemon, and the idea of a giant drill-nosed mole becoming even a totally unrelated prehistoric beast does kind of have a sort of palaeological theme, doesn't it? 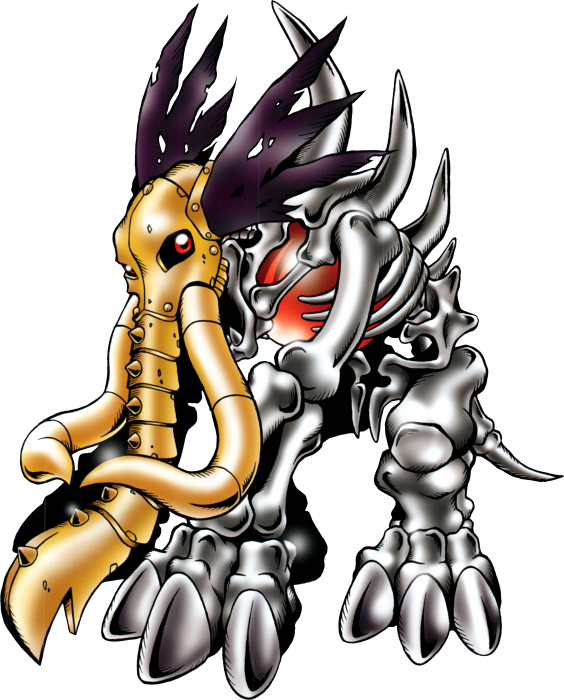 Mammothmon is gracious enough to dive even deeper into horror territory, too, as its canon Ultimate evolution is an undead, mostly skeletonized mammoth known as SKULLMAMMOTHMON! A fun way to play with the fact that this is supposed to be an "extinct" creature, and despite being undead, it's also a vaccine type, ostensibly the more "heroic" category of Digimon. It's said that a computer virus is what decomposed it down to bones, and left it with nothing but a mindless, violent obsession with fighting more virus-type digimon.

I also neglected to mention this on some of our previous undead, but that big sphere in Skullmammothmon's rib cage is called a "digicore," it's supposed to be the real heart and soul of a digimon, and it can be seen in the chest cavity of several other skeletal monsters. It's a bit of worldbuilding they'd eventually forget about and not do a whole lot with, but it's always fun to spot it again.