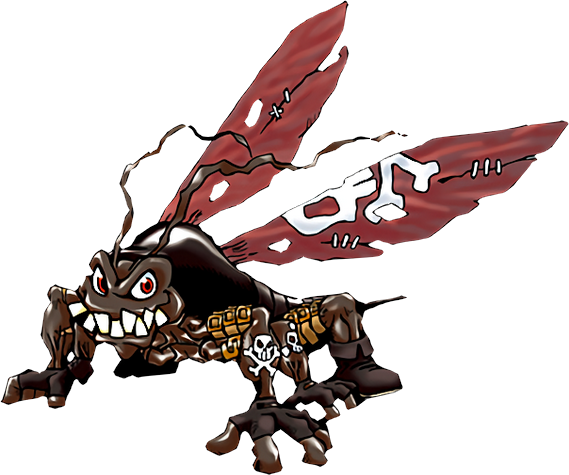 So there was one more lonely, adult-level insect digimon from the late 90's besides Yanmamon, Dokugumon and Snimon, but I guess I wanted to save something this good for a little later. It also hurts worse than a lot of other orphanmons, because of ALL the digimon I'd want to have a full evolution line, a goofy punkass cartoon cockroach is almost up there with Raremon. It has that more "American cartoon" look and feel that I loved about Chuumon, but doesn't skimp on the cool, insectoid details with a great looking hunchback, segmented abdomen and tattered wings with yet another Jolly Roger plastered across them, though now it's really bothering me how Roachmon's back is drawn in front of both wings and they don't at all look like they'd attach at the right angle.

Roachmon is BEGGING to evolve into a big Beelzebub-like fly Digimon that will never exist, and further into something even buggier and skuzzier than that, like an Ultimate that's just a whole big swarm of pesky insects, or a surprisingly tiny plague-infected flea, or even a gas-masked exterminator-like humanoid who's obviously just an insect digimon underneath its disguise.

Roachmon is of course another "garbage" evolution, but one from a later generation of the virtual pets. This particular pet introduced the concept of Jogress or "fusion" evolution, with every possible adult stage obtained by merging two different child stages. If, however, you tried to merge anything you weren't supposed to, your result would always end up being the punkass cockroach. This included both attempts to merge the same species with itself - an agumon with an agumon - or merge one of the adult stages with anything, since they were already a fusion product and couldn't fuse any further. I like the idea that Roachmon is specifically a garbage product of this particular evolutionary process.

Bizarrely, the only further evolution for Roachmon was originally Mekanorimon, the empty machine digimon requiring its own "pilot" to function. We reviewed it back when we reviewed Andromon, but I probably should have really saved it for here, since it actually debuted as the evolved form of this cockroach. Why? How?! Is there still supposed to be a Roachmon inside, like how Numemon controls Monzaemon? Or does this poor bug actually evolve, for some reason, into a brainless vehicle? Intriguing, to say the least, but Mekanorimon would later be demoted to only an Adult-level Digimon, and Roachmon would forever lose its ability to evolve into a Mobile Suit.