ENTRY 057: FLORAMON AND SOME WEIRD BIRDS 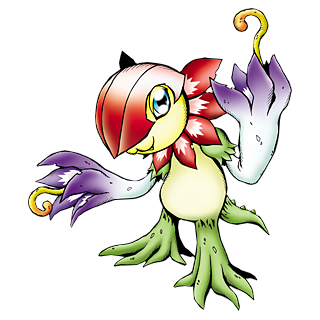 Today we have another evolution line that's sort of complete from the child level on up, even though the connections between these digimon are pretty loose thematically. It all starts with Floramon, an alternative to Palmon said to even have a kind of jealous rivalry with it. Floramon isn't as cool looking to me as Palmon, but it's certainly an interesting looking creature. The "helmet" is seemingly formed from its upper petals folded down, and its description implies that all of its petals can close up over its head. That probably looks pretty cool, but we've never seen it happen, and the artwork is only kinda drawn like it could; those lower petals are a tad too short. 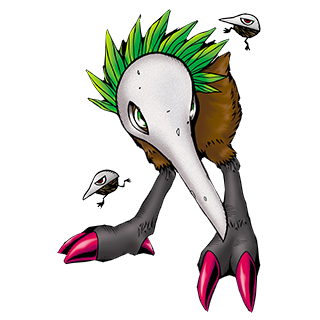 Floramon's most accepted evolution feels somewhat like it fits in visually with the masked flower, but this isn't even a plant type digimon, obviously. It's a kiwi bird! A kiwi bird with a really cool bony mask, like a plague doctor, and the ability to spit even more adorable little kiwi-head-critters. I liked this design as soon as I first saw it as a minion of the villainous Puppetmon, whom we'll be reviewing in just a couple pages. In fact, Floramon was a minion of his too. 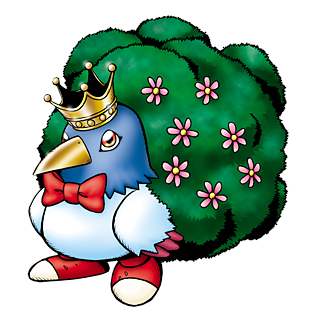 I honestly have no idea what they were going for or referencing, if anything, with Kiwimon's most common evolution. It's a fat little bird with a crown and a huge flower bush growing out of its back. Whatever they were thinking, it's certainly got a whimsical, magical feeling to it, something straight out of Wonderland or Oz, which is probably exactly the point, as this was ALSO one of Puppetmon's (nicer) henchmen. Not as cool as Kiwimon, but, interesting. 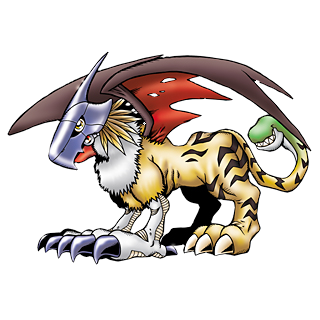 In some cases, this digimon evolves quite logically from a Hippogriff digimon, but not an interesting enough one that I really feel like reviewing it, and it's just as often that this thing evolves from Deramon for some reason. Let's go with that. It's the least creative and cool thing on this page, in my opinion, but the idea of a flower monster evolving into a ballroom kiwi evolving into a fairy tale bird evolving into a mythological bird-headed beast is...well, still not something that makes THAT much sense by most standards, but, I still "get it."