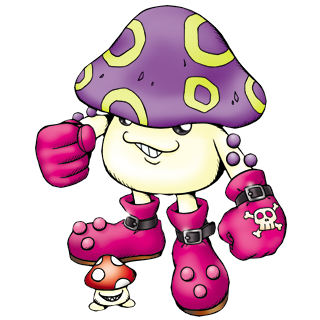 An incredibly fun line and fun character today, beginning with its most common child form, an anthropomorphic fungus! Mushroomon is a pretty simple mushroom with arms and legs, especially themed around being poisonous and capable of hurling great little toxic mushrooms with feet of their own! I feel like I'd find Mushroomon a whole lot cooler if it didn't have eyes, though, and perhaps if it has the kind of fangly grin its little "babies" have! Still, not bad. As we mentioned earlier, one of Mushroomon's common evolutions is actually the spider digimon, Dokugumon! 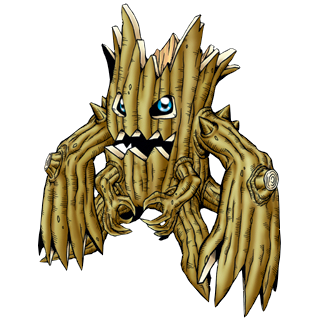 I am constantly forgetting that this is an adult stage. It's so small, and it's designed so much more like a child digimon! I always enjoy a good tree stump monster, though, especially with the classic jagged haunted tree mouth. A real Halloweeny 'mon! How ya feeling about all this alternate art? A lot of Digimon have newer, nicer illustrations originally from certain mobile games and collectible cards, and I've been using the Waifu2x service to scale them up without wrecking their quality too much. Some of them are vastly better looking than the original bandai illustrations, but I feel like I should still be using those as the "official" images, shouldn't I? 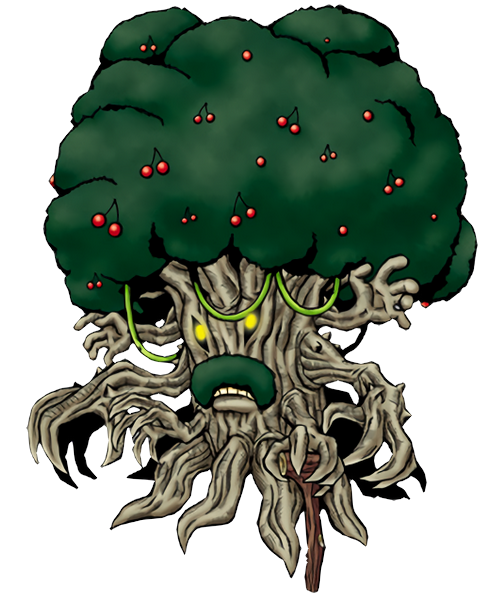 So of course Woodmon matures into an entire tree, with nicely eerie, glowing eyes in its vertical crevices and multiple gnarly tree-hands, but... ...Cherrymon debuted in the original Digimon World games, and had an entirely different design with the most awesome face in the world. MISALIGNED, freaky eyeballs are the best possible eyeballs, and instead of a bushy mustache and teeth, alpha Cherrymon had a row of staples for a mouth! It was just an utterly creepy, weird, badass monster tree all around, and for some reason they decided it should instead be an old dude with facial hair. Boring. I'd give the original design a perfect five, but Cherrymon as it now stands is only going to earn a two, sorry. It would have been a neutral three, but the very idea of changing a monster in a mons game is kind of a sin against nature. 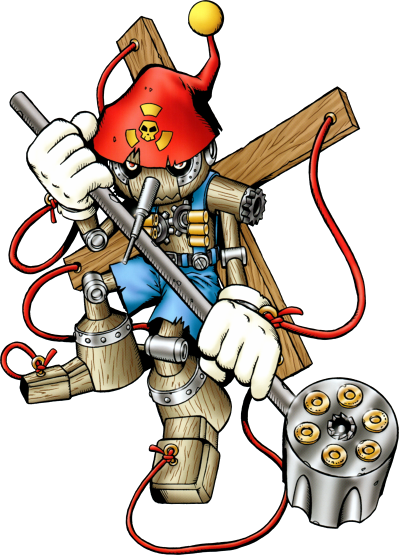 Well, originally Pinnochimon, but Puppetmon was the name I knew him by as another of the villainous Dark Masters, and the first one we've reviewed since we covered Machinedramon and Metalseadramon at almost the beginning of these reviews!

Puppetmon is one of those more complex, later-style, humanoid designs I wish hadn't become so, so overdone, but it's one with a lot more personality and goofiness to it. I love the needle-like metal nose, the jagged mouth, the creepy hat with that radiation skull certain digimon sport, the little gears on his chest, the cartoon gloves...he's got basically everything going on that you'd want from an evil wooden puppet digimon, and his hammer seems bizarrely crafted from a gigantic gun barrel!

Where this guy really shines, though, is the amount of personality in his anime incarnation. I dare you to have ever seen this expressive little creep in action and not fall in love with his adorable voice (in Japanese or English) or earnest drive to "play," even if he has positively no regard for the feelings or safety of others. He's even got GUNS!!! Though his mansion is filled with deadly booby traps disguised as toys, he eventually pulls real, actual firearms out of his toy box, apparently his favorite things to play with, and forces T.K, the youngest of the kids, to play a deadly game of tag. This all was pretty carefully (sometimes cleverly) edited out of most overseas versions for fear that it might make guns look more appealing to child viewers, which is a valid concern, though I think the episode hammers home an idea that guns are a pretty ugly and frightening thing to treat as playthings. The sad thing about Puppetmon is that we're repeatedly reminded he doesn't have any "friends," though in Japanese, that's "nakama," a broader term that can also simply include "allies." I'm not just spewing trivia here; the other Dark Masters definitely have "allies" at the very least, or minions that appear to respect them, whereas Puppetmon's various associates all seem fairly willing to sell him out if they know they can get away with it.

Whether he was always such a rat bastard or a victim of circumstance, Puppetmon's life had to have been pretty sad to witness, considering that as a fully evolved digimon, he basically "matured" into a child. A child with no empathy and way more power than it could handle. Why wasn't he the main villain? He's certainly the most complex. It bears mentioning that another, entirely different Puppetmon eventually appears in Digimon Fusion, and as more of a troubled antihero, but as cool as that is, I'm always going to remember this digimon as a murderous little brat that nobody loves.

Speaking of that cute little voice...Puppetmon sings the very last of the villain songs we're going to be sharing here. You have to love that creepy intro and demonic giggling, though it quickly becomes a sadder, sweeter tune with not as sweet lyrics. One last thing to mention? I only just learned (and can now plainly hear it) that Puppetmon has the same voice actor, performing the same voice, as Jibanyan!