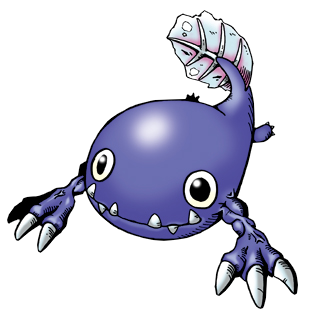 How precious and perfect is this little digimon tadpole? Absolutely one of the best child-level monsters in the series, hands down. A simple pollywog with big, round fishy eyes, interlocking teeth, and those unsettling muscular arms digimon so love to surprise us with. Otamamon actually debuted in the sixth and last of the original virtual pets along with Tentomon, and as the original pets only offered two child stages each, this meant that the sixth pet gave you either an insect or amphibian. Stellar choices!

Otamamon's main method of attack is its own voice, and they tend to love music in general. Japanese culture actually likens the appearance of tadpoles to musical notes, which is adorable. Why didn't we ever think of that over here?! Tadpoles even turn into animals that really sing! 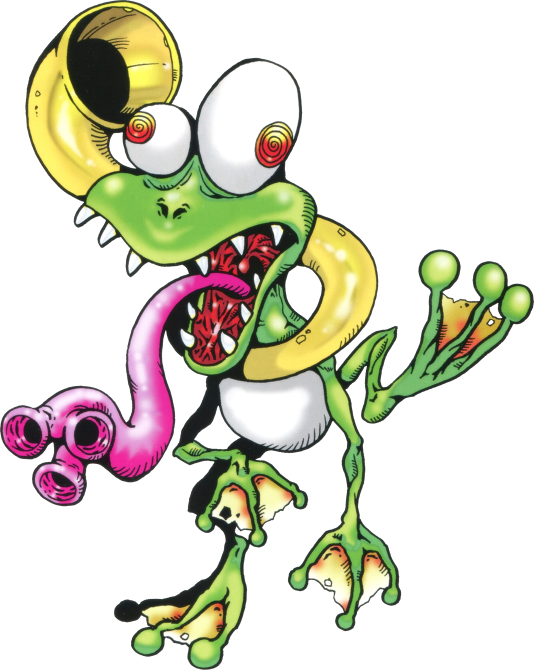 ...And here's one now! This is also where things get slightly strange with this line. The sixth pet featured Shellnumemon as a "failure" adult when you make too many care mistakes, but if you simply didn't meet the criteria for any other evolutions, you wound up with Gekomon here, still treated as another kind of "failure" digimon, but the first one to not be associated in any way with poop or garbage. It's pretty unusual that a "failure" would be the actual truest evolution of an otherwise ordinary child stage, but I guess the idea here is that a tadpole is going to turn into a frog by default anyway, and it just takes extra care - or gross neglect - to end up with anything else. So, as a design, Gekomon has that same "90's American Comedy Cartoon" style as most of the other "loser" digimon, and that's already my favorite aesthetic we ever see in these here digital monsters, but I daresay Gekomon perfects, and this newer illustration really drives that home. Gekomon's crazed, irregular eyeballs, wild teeth, lanky body, three-pronged tongue and absurdly built-in trombone all make for one of the zaniest, most endearing, most criminally under-appreciated designs in the whole series, and you know I mean it when we're not even talking about a bug or a slug or a trash pile this time.

Gekomon may not be one of my personal, must-have favorites as a concept, no, but for real, no joke, I genuinely think this bonkers frog might actually be, in my eyes, the best any Digimon can ever possibly look. You may not like it, but this is the ideal Digimon body. This is what peak digivolution looks like. 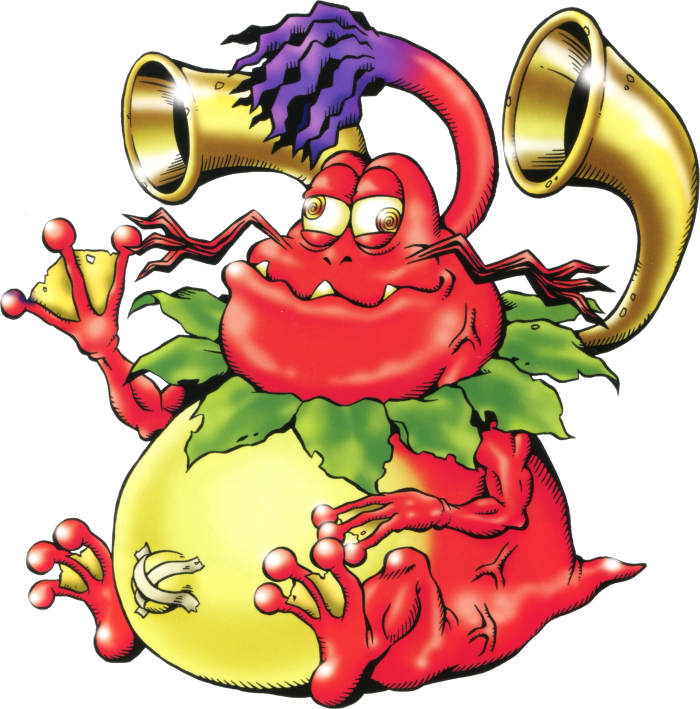 It is, unfortunately, a little downhill from there, but maybe not so bad. What truly places Gekomon in the same family as "failures" like Numemon and Sukamon is that it's the only way to get the sixth pet's most powerful ultimate. This is the monster occupying the Monzaemon slot in the pet's coding, and even attacks once again with little hearts it can hurl. Obviously we end up losing a great deal of Gekomon's uniquely outrageous personality for an evolution that mostly thinks "bigger is better," or perhaps "fatter is funnier," and it did take a long tiime for this one to grow on me even a little in comparison. I will say that the collector's card artwork may not be the MASTERPIECE Gekomon's represented, but it does go a long way to making this design look cooler and livelier. I really appreciate those drunken eyes and scary little teeth in this pose, and only now realize that this digimon is also meant to resemble a big, fat tomato, I guess like the real world "tomato frog!" That's certainly a step up from only a bigger, fatter Gekomon with funny hair, but I still miss how Gekomon basically sports a froggy version of that Violator mouth. What we really need here is an Ultimate stage that hearkens back to that, maybe even plays up the line's scarier qualities. Where's our Devigekomon!?