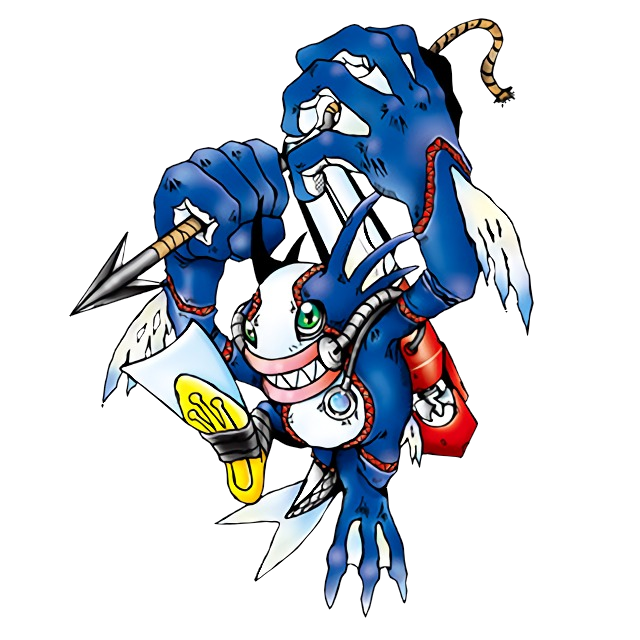 Otherwise known as Hangyomon, this humanoid fish is another of those perfect level digimon that stands no taller than a lot of child levels, originally introduced by an all-aquatic virtual pet along with its fellow perfect, Dagomon. We already talked about how the two were used together in a Lovecraft homage episode of the anime, but I didn't mention at the time that the creatures in the episode were only said to have taken the form of Divermon because it was the closest digital-world equivalent to whatever they really were, which was probably actual Deep Ones.

Again, pretty novel references for their time, but I think we as a species can all agree by now to lay Cthulhu stuff to rest for a while, yeah? What's really more interesting about Divermon is how much stuff was packed into its design. They really went all-out making this THE fish guy Digimon, but amusingly also modeled as if it's all just an elaborate wetsuit, including an oxygen tank that's also a propulsion system and a tail that appears to be completely artificial. I love how many digimon used to resemble "costumes" with something unknown inside, it's really a lost art. Divermon is probably also the single most appropriate digimon who can evolve into the british blowfish, Pukumon, since they're both rather smallish, cartoonish fish creatures with some human elements.

Another thing about Divermon? It's a data type said to be a "cheerful" creature and just kinda wants to frolic in the sea, but most divermon we've encountered in the anime were aligned with villains, and even those that weren't have been portrayed as pretty fearsome.