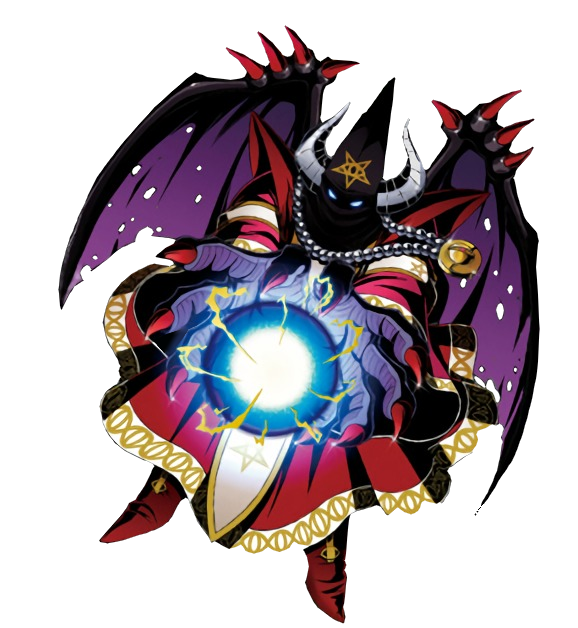 One of the most powerful of all demon digimon, Daemon was introduced only briefly in the second anime series, but allegedly the top villain pulling the strings behind the scenes and leader of the "Daemoncorps," a team also consisting of Skullsatamon, Ladydevimon and Marinedevimon. Good taste in friends, Daemon!

We were also introduced to this digimon in his "mantled" form, a humanoid figure with creepy occult robes and a conical hood. I see this kind of design a lot in anime; I think it actually might have been inspired by the Kloo Klurx dipshits, but Japan misunderstands it as a generic Scary Cult outfit and associates it more with Satan. Under the robes, Daemon is actually kind of goofy looking, but in a way that I think may also draw inspiration from various Devilman demons, or at least the general style in which a lot of them are drawn. The only thing really strongly cool about this design, to me, is how the scaly limbs can apparently extend or retract, and how their furry "sleeves" end in their own rings of teeth. Various other illustrations make Daemon look a little more epic and threatening, this probably being my favorite. You can really tell here that Daemon was originally conceived as the most evil and supreme of all evil digimon, the true equivalent to Satan Himself in the digital world. Today, he's just one of seven different demon lord digimon representing the seven deadly sins, his being wrath. Daemon is also one of the few digimon to have an "ultra" form, or a seventh evolution into an "even more ultimate" stage, because of course that's something digimon eventually did, and has since pushed even further as new series and new games seek to break the record for epic-scale villains.

Super Duper Daemon is...alright. A little less beastly, a lot bigger looking with that tiny little head, spikier and with scarier wings. Not terrible, but nothing too amazing either.

As a last note, Daemon is just Demon in Japan, but was almost translated for the dub as "Creepymon" to avoid offending religious folk. Instead, they compromised with Daemon because hardly anybody uses that spelling, or something. Personally, I think "Creepymon" is so entertainingly underwhelming for Literal Satan that I wish they'd stuck with it.