Welp, it's time to stop beating around the bush and move on to the digimon introduced by Adventure 02, the sequel series that had some interesting new ideas, but ultimately just wasn't quite the same emotional rollercoaster. It also marks, perhaps, the final massive move away from digimon's "classic" art style to the newer style I'm always a big whiner about, so, this oughta be fun. 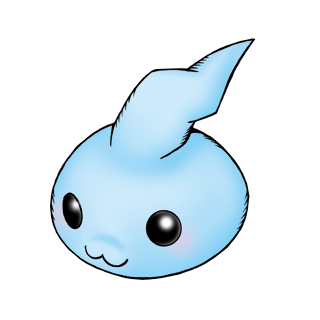 Today's digimon line, then, is basically the successor to Agumon, taking on the role of central mascot and the partner to our new main hero kid, just as generic as Tai but slightly younger and slightly less competent. Honestly, I just don't remember too much about the character, and I don't think we ever really saw Chicomon, did we? There's nothing to say about it as a design. Kind of as basic as a baby digimon can get. 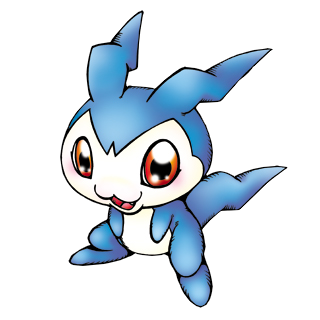 This is a lot more of a body than most Baby II Digimon get. What was wrong with just being disembodied heads? It's okay I guess. 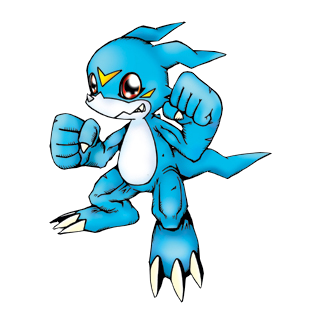 Here he is, the main event, the franchise baby of the second season. Sometimes spelled Veemon, this little guy is considered a dragon digimon, rather humanoid for one, and reminds me almost more of a stylized wallaby or rabbit than a reptile. I feel V-mon is also made up of slightly cleaner, plainer shapes than the dumpier Agumon, and as a design overall, I'm afraid V-mon is also just an "okay, I guess." 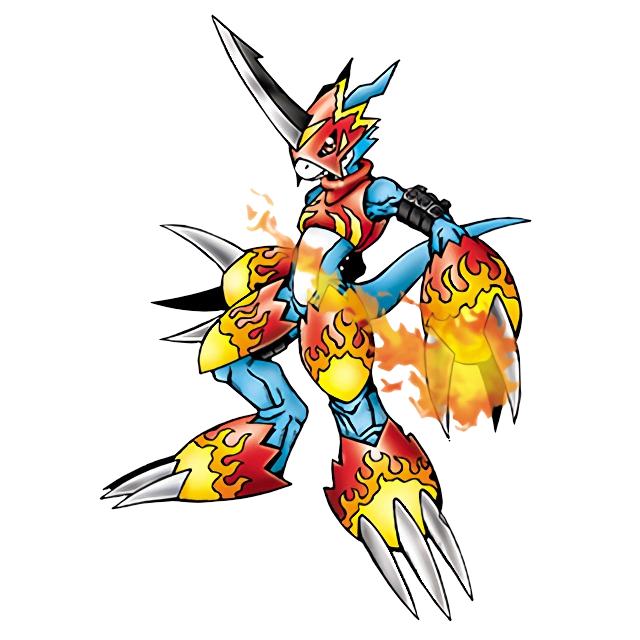 So then, here's where things get pretty shaken up by Season 02. Our main storyline has it that digimon can't digivolve by traditional means anymore, barred from doing so by the human villain, the Digimon Emperor. Fortunately, there's an ancient, secret, alternative form of evolution known as "armor" digivolution, which can be unlocked when a digimon is exposed to a special "digi-egg." In this case, the digi-egg of courage can transform V-mon into Flamedramon here, which aligns with the "crest of courage" Agumon used to evolve into the firebreathing Greymon.

Instead of fiery breath, this digimon punches things with its big, burning hands, which is neat and al, but the design really is just a taller, more grown-up V-mon with some flame themed armor on it.

Fresh off my love of the original series, I remember getting just as into Season 2 back in the day, but looking back on it now, nearly two decades later, neither the writing nor the digimon designs were quite as interesting, and Flamedramon is kind of an example of many things to come. 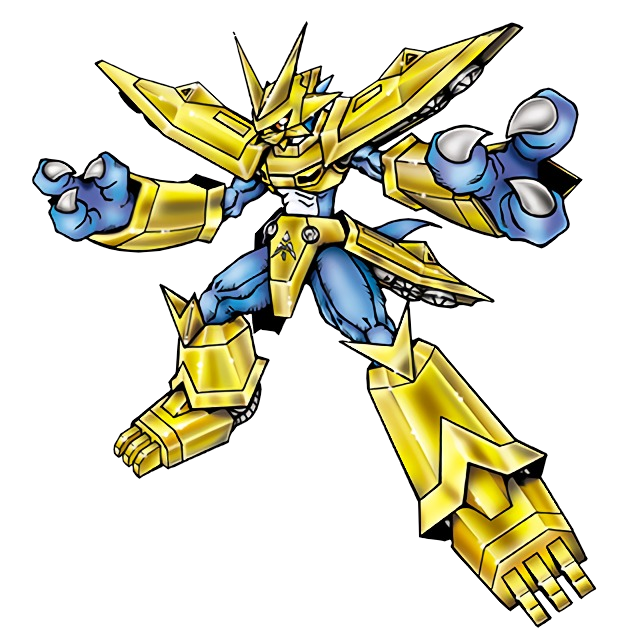 And here's where things are about to get a little out of hand. There are many different digi-eggs, and for each one, V-mon has a different armor evolution. Some of them are pretty obviously related to the little guy, while some are so different I'm really not sure I should be reviewing them all on the same page...but, what the heck, let's give it a shot.

Magnamon is what happens when V-mon meets the Digi-egg of Miracles. Magnamon is also one of thirteen special hero digimon known as the "Royal Knights," which I guess we'll complete some other time. I'm not gonna drop what I'm doing here to look at twelve more of these bozos.

It's grown-up V-mon in gold robot armor. Whatever! 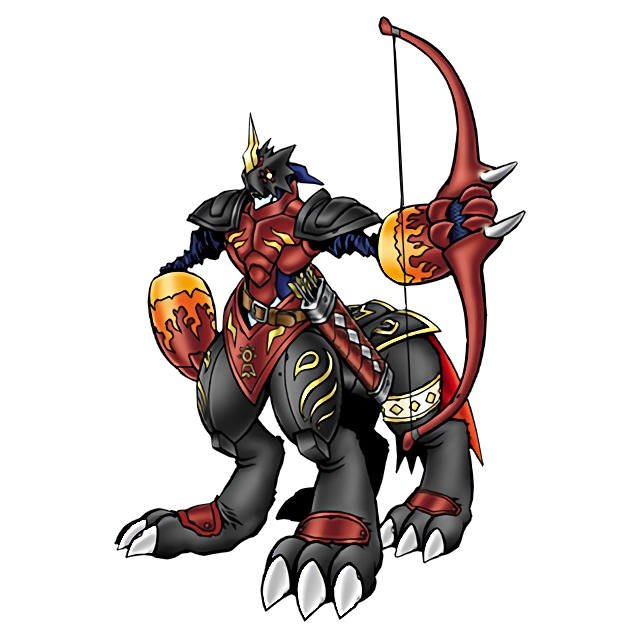 It was T.K. and Patamon who once used the crest of Hope, and for some reason, the equivalent digi-egg turns V-mon into a scary centaur with claws instead of hooves. Alright. What else can I really say about this one, either? It sure is an armor having thingy. 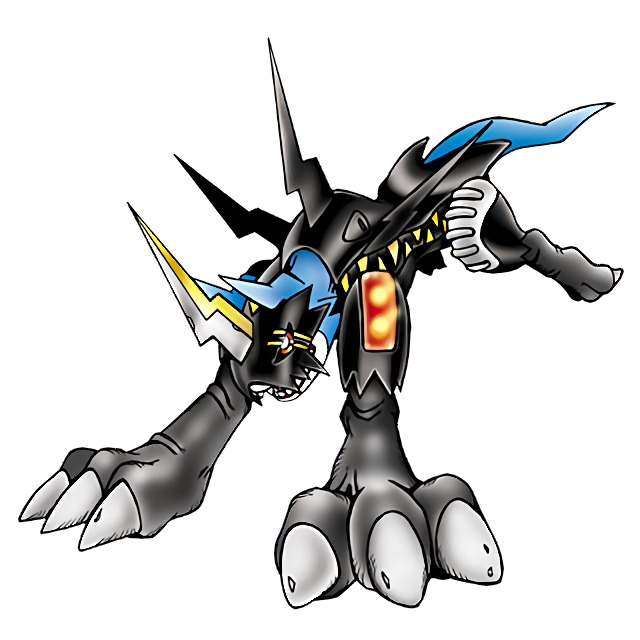 Matt and his wolf furry friend were the digidestined of Friendship, so the power of friendship turns V-mon into a black-armored, predatory quadruped with cheetah-like speed and electrical bolts. The only interesting thing here, designwise, is the break from a humanoid stance. 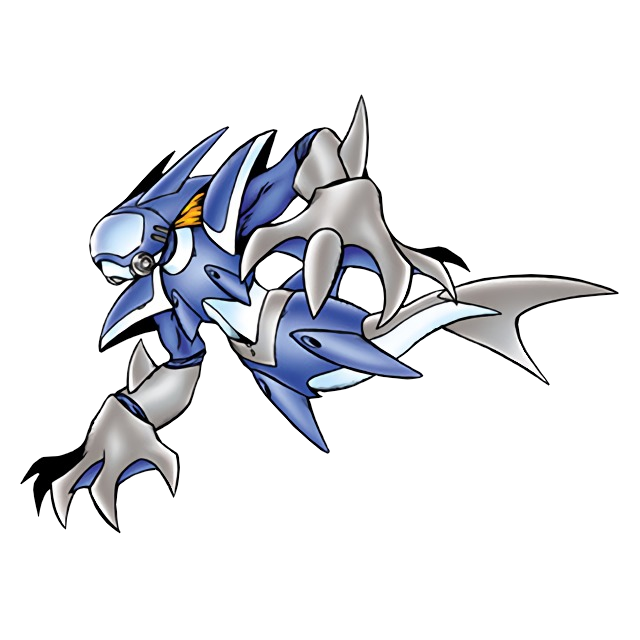 Reliability was the power associated with Joe and Gomamon, which is why it turns V-mon into a sea mammal. It's basically a dolphin mermaid robot, and it's one of the cooler looking ones we've seen so far, but still just so far removed from my aesthetic that I'm at a loss to come up with a stronger opinion than "this definitely exists." You're killing me here, Digimon 02! Killing me!!! 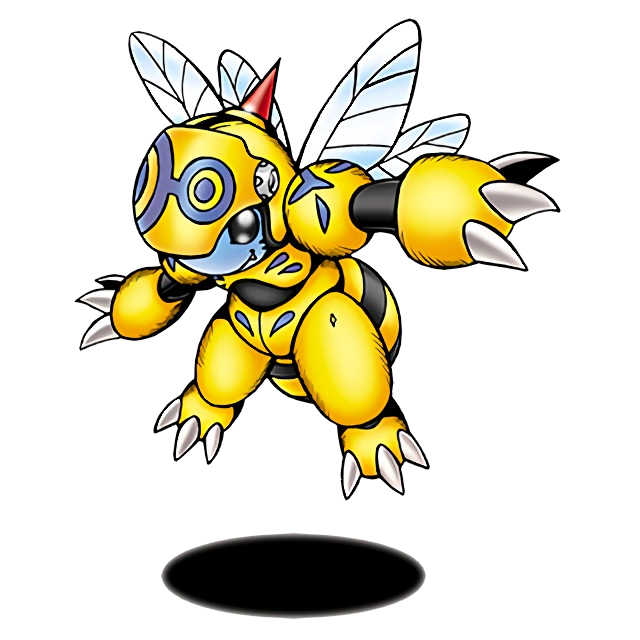 Our beloved Tentomon and Kabuterimon used the Crest of Knowledge to digivolve, and V-mon can also use it to become an insect type, but it's basically another differently shaped V-mon in a suit. The rounder face and solid black eyes are definitely cute, but I'm afraid this is still another pass for me. 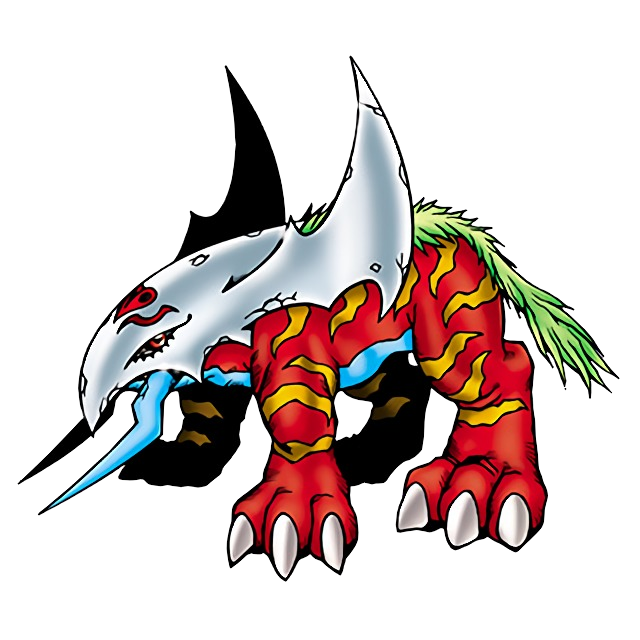 Finally. Something actually interesting. The power of love, previously connected with Sora and her bird pal, turns V-mon into this tusked beast with a wickedly beaked and bladed helmet, eerie eyes and a spooky, broken goth heart insignia?

This design is actually a sort of distortion of a digimon we'll see on the next page, and what's really wild is that the digi-egg of love is supposedly far too much for V-mon to handle, so in evolving this form, it gets corrupted and twisted into an entity of pure hate.

That's a pretty novel idea...but unfortunately, this form would never appear in Digimon Adventure 02. An amazing plot twist was staring them in the face, and they left it out completely. 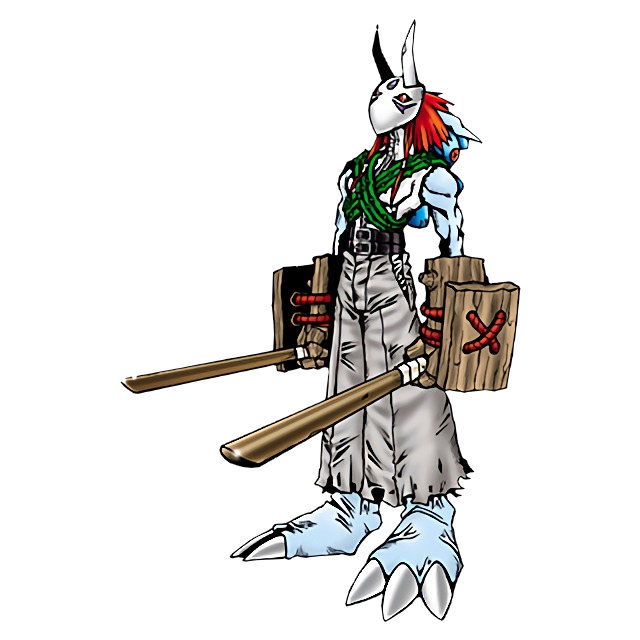 I'm not sure how this design is meant to parallel the plant-based Palmon line, but whatever. It's another actually cool looking armor form for V-mon, a human shaped dragonoid with a pretty eerie mask. It's apparently supposed to represent a Yashka, which are sometimes malevolent, sometimes friendly, always terribly powerful protectors of nature. Okay, I guess that's the plant connection. 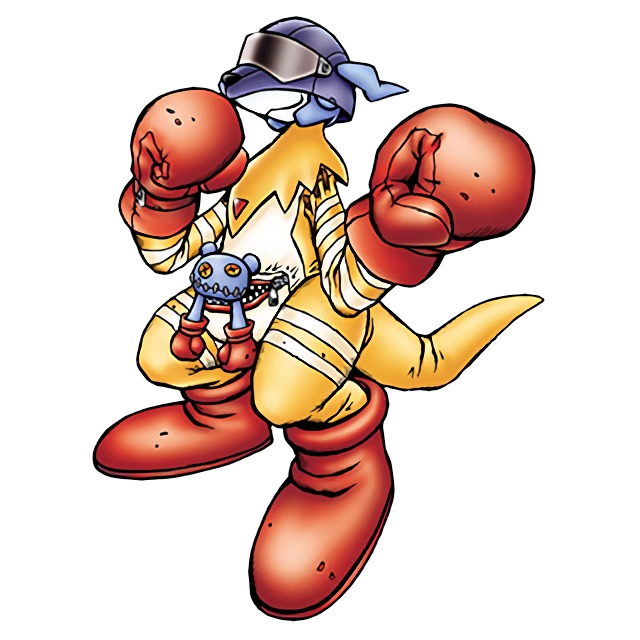 Haha, what?! Kindness is the crest of a new digikid we'll be talking about soon, and his digimon is an insect type, but somehow the associated form for V-mon is a plush boxing kangaroo. The helmeted head isn't that interesting, but I LOVE the disturbing zipper mouth where its "pouch" should be, chewing on a little voodoo-doll surrogate baby. I think I like that creepy pouch enough to give this an entire extra point. It feels like the kind of monster detail classic to the digimon style, and at this point, I'm taking all of those I can get. 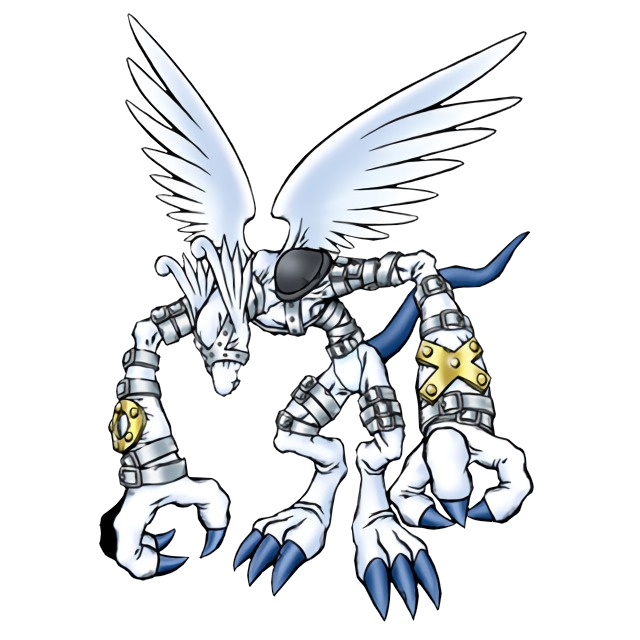 My god. Something OUTRIGHT GOOD?! AT LAST!? The crest associated with Kari, Gatomon and Angewomon transforms a V-mon into a holy-aligned gargoyle, which is a logical concept we don't see nearly enough in our monster fiction, and it's a freaky design that would even fit right in alongside first-wave Digimon!

Gargoylemon has all the elegance and beauty you expect from an angel type, but even ganglier and gnarlier than the original Angemon, with a streak of the downright haunting in eyeless gaze, forever blinded by metal bands seemingly bolted to its face. It's almost a design that could fit into a game like Dark Souls or a Manga like Berserk. It's THAT badass. ...Maybe a little less badass when its first anime appearance, many years later, would be as a police chief in Digimon Fusion with a siren on its head, a trenchcoat, and sunglasses it can't possibly actually use, but you know what....I'm glad. I'm glad that this actually happened. 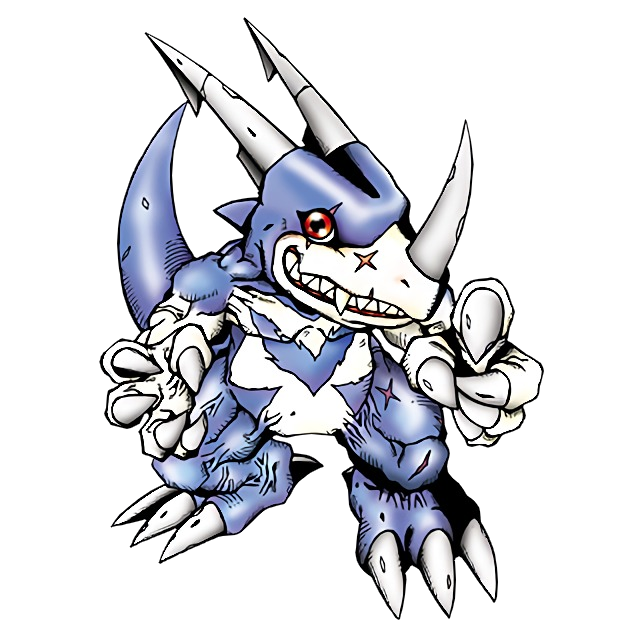 So, that was all the armor forms, or most of them anyway, and now we come to the "natural" adult stage for a V-mon undergoing traditional digivolution, another form the anime V-mon would never get to take, as far as I can recall.

This veiny and battle-scared dinobeast definitely has more of that classic digimon feel to it. Not bad. Would have fit in with the original set of virtual pets, easily. 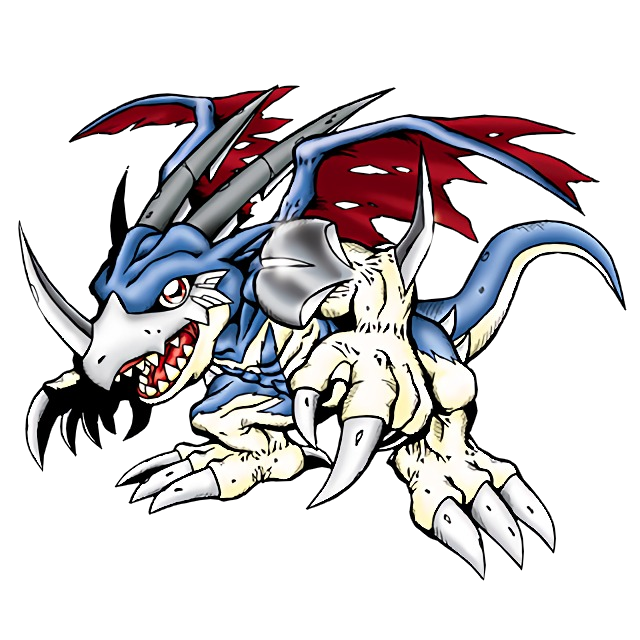 Straightforward, metalgreymon-style winged evolution but without any cybernetic elements. Nice to see some tattery wings again, at least. 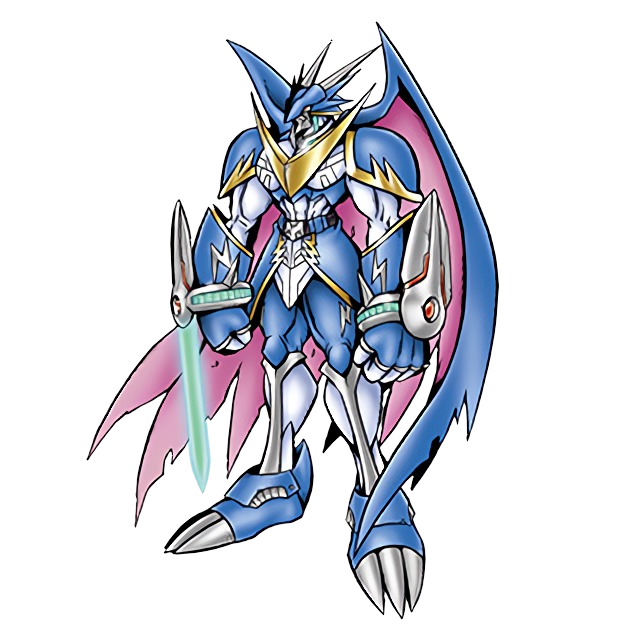 God...we're really not done yet, are we? This is...this is so many V-mons, and here we're right back into "totally not my aesthetic" territory, even if the purple-lined wing-cape is pretty nice looking. 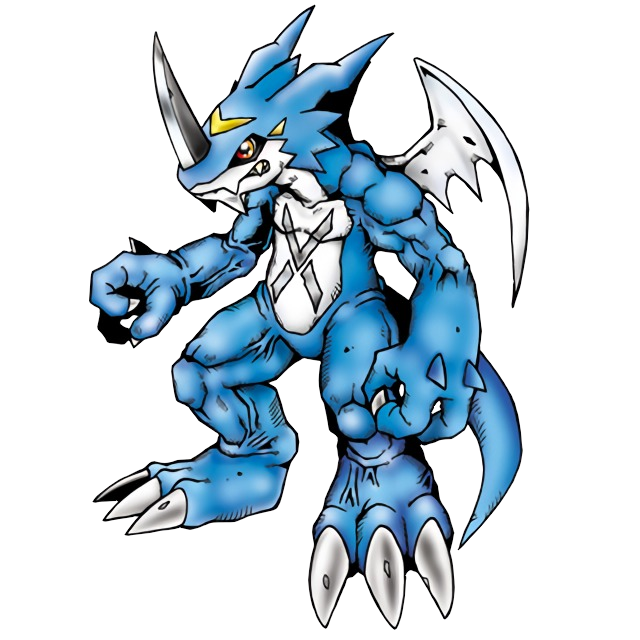 Please...that's enough...why does this exist. We aleady have V-mon and V-dramon and Aero v-dramon. How many Veemans designs did they really have to come up with and why did they have to use all of them. 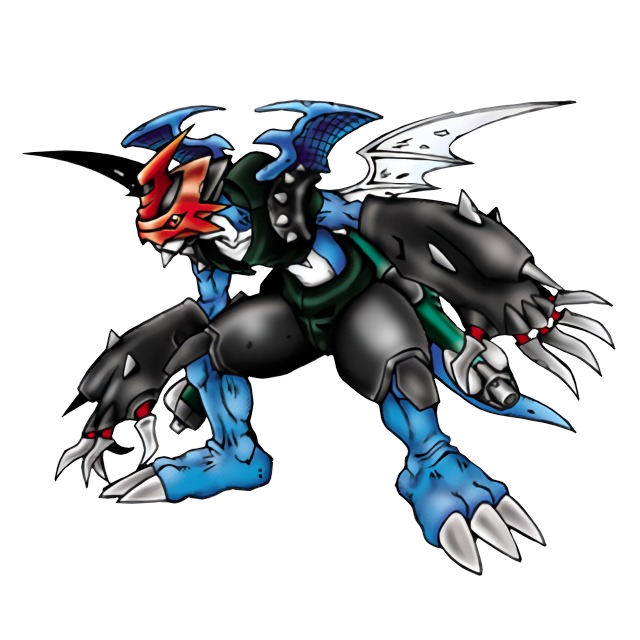 A fusion of X V-mon and a digimon will review later. Yeah it looks cooler than most of the things on this list, but how can I possibly keep caring!? There's even another, different fusion of the two besides this one, but it leans more toward the other digimon involved, so thank god we've got an excuse to save it. 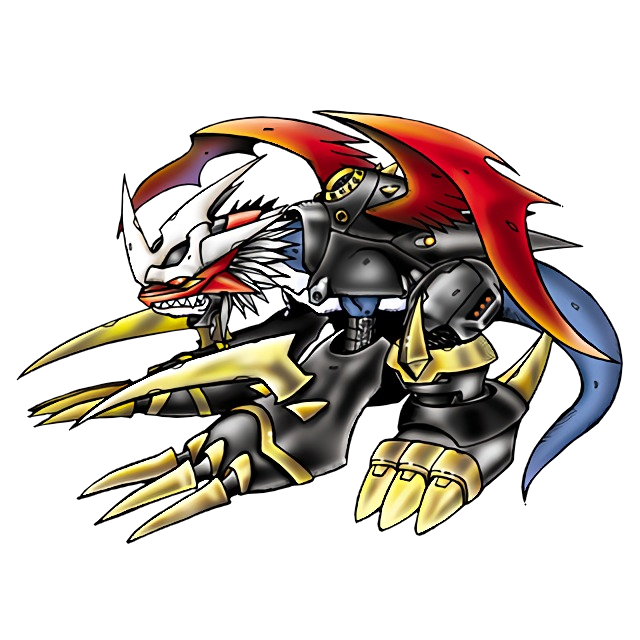 Ah. Swell. "Dragon mode," huh? So this goofy looking mess is one of a set, isn't it. 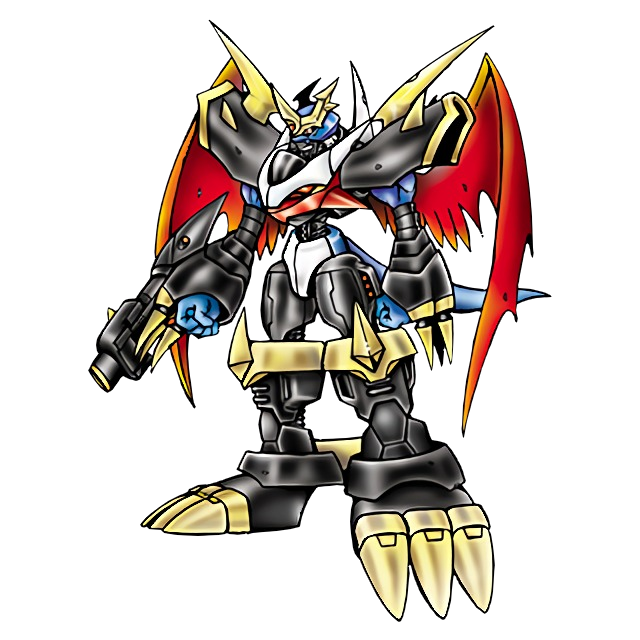 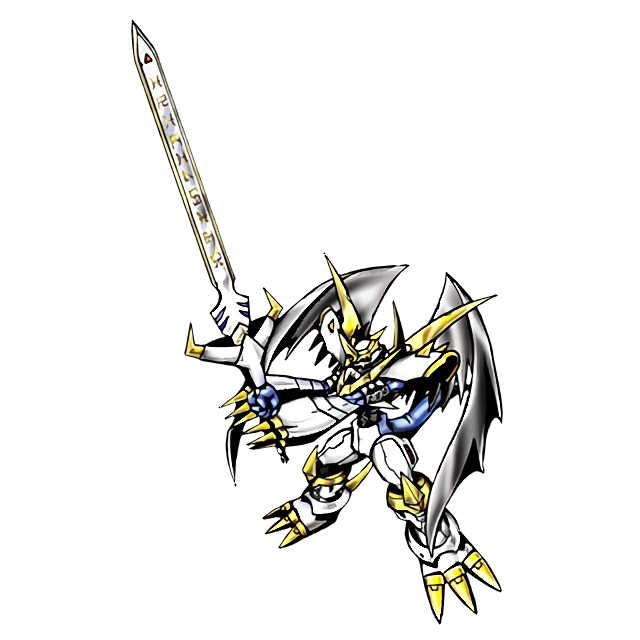 Hey, that's swell, V-mon. Nice sword. Good for you, having a sword now. Are you done?

Really? You're really all done, pretty much? Jeezy lord almighty. Reviewing these evolutions all on one page was probably a bad idea. It's exactly what I thought I wasn't going to do, but they were still all part of clearly defined sets dominated by digimon directly tied to V-mon, so how was I supposed to divide them up?! Ergh. Yeesh. This is too many things for only some of them to be cool. I just want to look at Gargoylemon and his stupid light-up hat again. Aaahhhhhhh. That hits the spot.