Let's actually NOT do that again. You got the idea yesterday, right? Our new hero digimon all came with a wide set of "armor" evolutions, and not all of them make thematic sense. Instead of covering all of them together, I think we're better off if we only look at the armor forms featured in the anime and whatever other forms feel closest to each line. When we've finished up the new digidestined, we'll look at the rest of their armor forms as individual digimon, alrighty?! 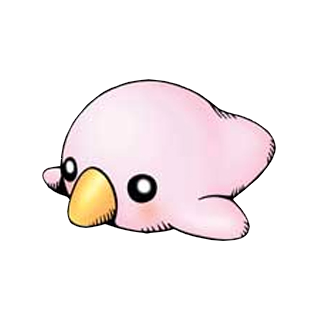 The earliest baby form of today's line is...good god...it's PRECIOUS. Like many baby stages, it's a "slime" digimon said to be extremely jiggly and wobbly, compared to a lump of silicon in its official description...but you can tell this is also a bird-based digimon. It's a blob bird. A blird. A borb. Whatever you want to call it. It's perfect is what it is. That same description lets us know that while it can't fly, it likes to lie on the ground in warm grass anyway. Get me 10,000,000. 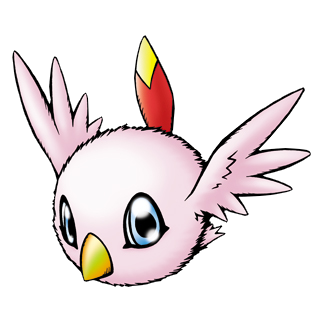 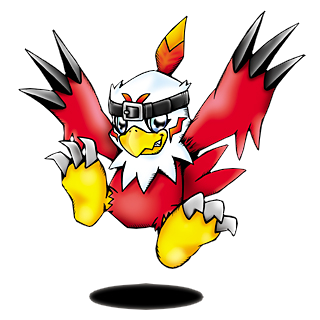 Alriiight, fiiine, I'll move on. Hawkmon is the partner digimon to a nerdy girl who's seemingly meant to be the spiritual successor to both of the original female digidestined, but as you may have surmised from V-mon, Adventure 02 really doesn't get heavily into the psychology of its main characters or why, exactly, they are partnered with these particular digimon, which sucks, because that was definitely one of the coolest aspects of the original series.

I just...don't really feel strongly one way or another about Hawkmon. He's a hawk with a belt on his head. He's okay, but I don't even remember any aspect of his personality. 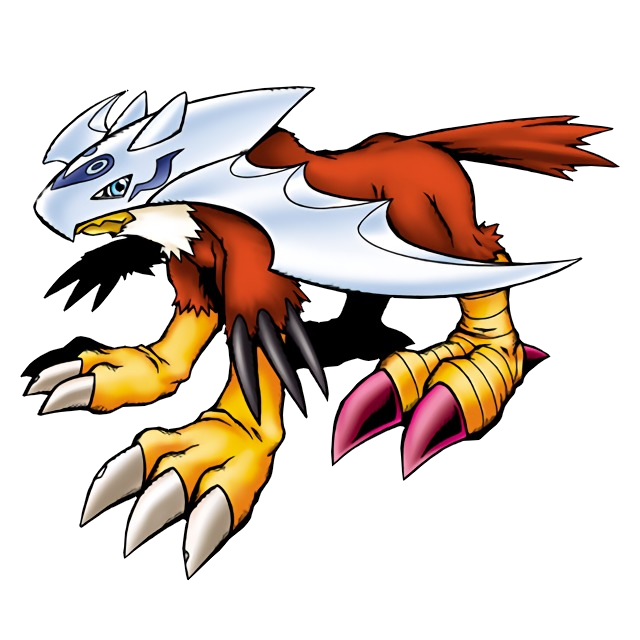 Like I said, we're not going to look at ALL of the armor evolutions this time; just the most important. Halsemon ends up being Hawkmon's go-to evolution, and you can see some similarity to V-mon's Love Egg form. That thing really was a darker, eviler distortion of this interestingly quadrupedal bird, which seems to "fly" using the metallic wings on its helmet. That's a pretty novel idea for a bird monster, not gonna lie. 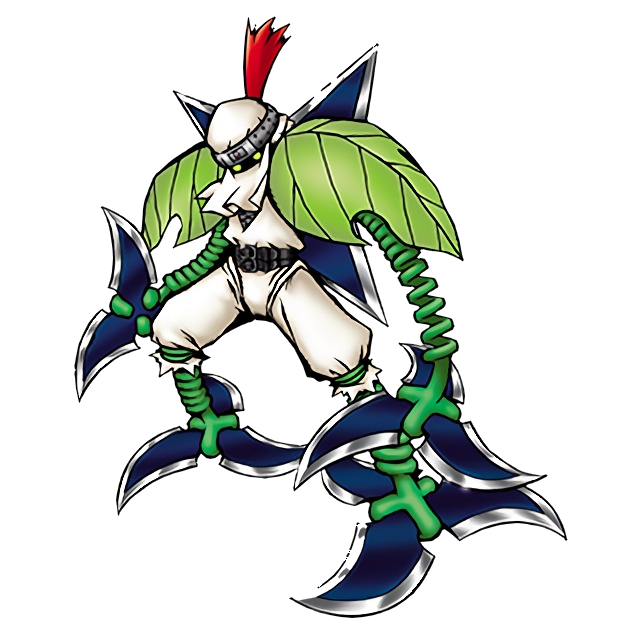 So, whoa, that is pretty unexpected. Hawkmon can evolve into SEVERAL possible bird-based armors, but the anime chose only two to showcase at all, and decided one should be its very, very least avian option. I'm certainly not complaining, because this void-faced plant-ninja is a pretty damn interesting being, with wacky springy arms and legs constantly gripping massive, frightening shurikens. That's just such a neat combination of design features. It's a monster whose anatomy completely revolves around wielding its signature weapon with maximum efficiency, and just a fun as heck overall visual. 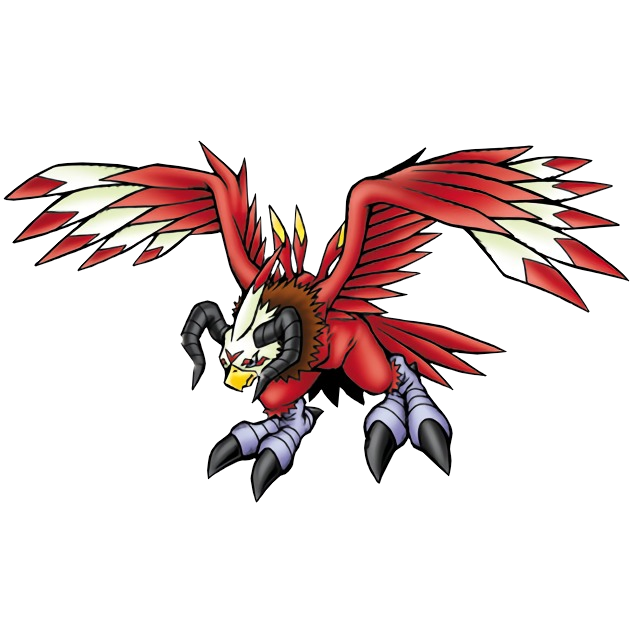 When evolving the "natural" way, Hawkmon becomes this giant eagle with horns. Not a bad design at all, but also not nearly as creative as either of the armors we just looked at. 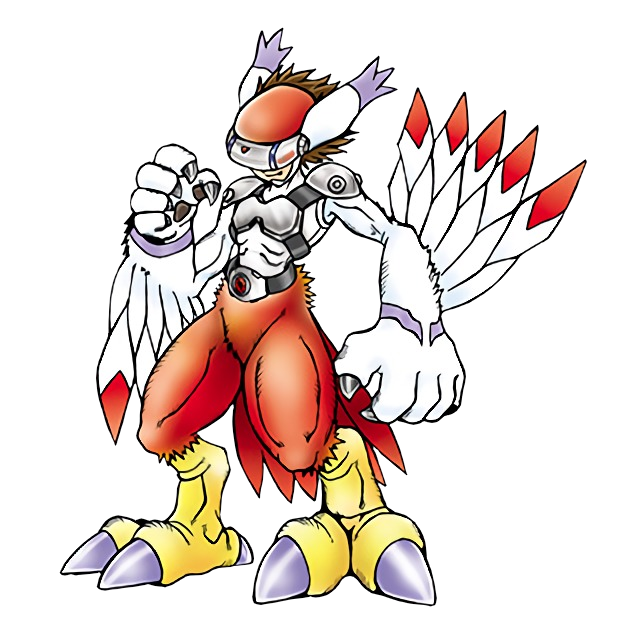 Hawkmon's perfect form is actually a fusion evolution, achieved in the anime when Aquilamon merges with good old Gatomon, so apparently an eagle and a cat make a human in a bird suit. Odd, busy, not especially cool or interesting to me. 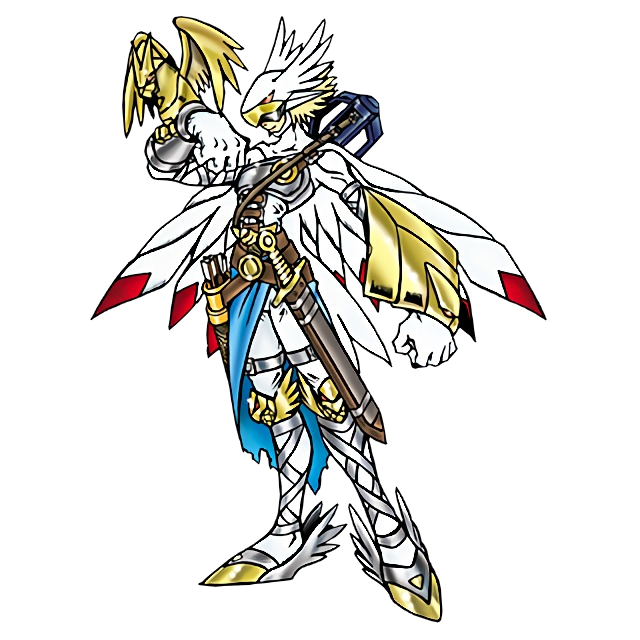 Never featured in the anime as an evolution of our own Hawkmon, but probably the most direct evolution of Silphymon. Another, different digimon kind of shares that honor, but it's also another of the "Royal Knights," and I feel like reviewing the rest of those separately if I can help it.

The concept of this digimon unfortunately never does much of anything with the golden hawk on its arm, which I thought was probably the most interesting design feature. 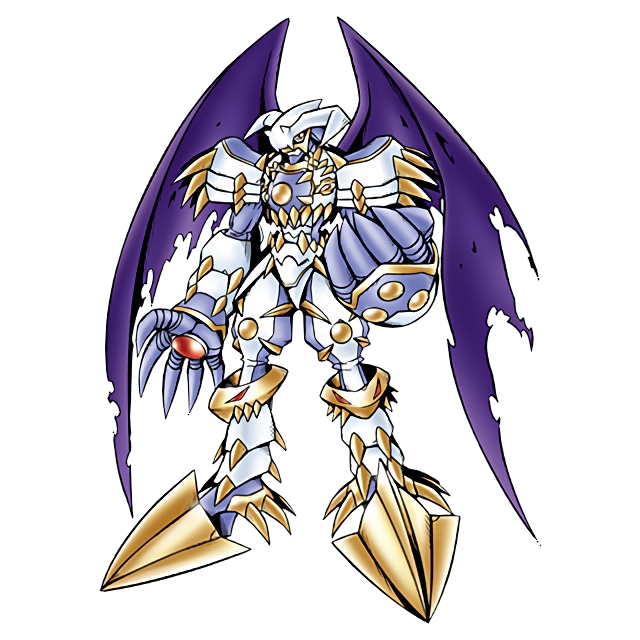 I actually forgot to add this one to this review until almost a year later, but Dynasmon here is one of the "Royal Knight" digimon and officially most likely to evolve directly from Silphymon, so you can also kind of consider it an ultimate form for the Gatomon line as well - but only after fusing with the Hawkmon line. It's interesting that the merger of a bird and a cat can eventually lead into a more dragon-like humanoid, and Dynasmon is in fact said to have "the power of a wyvern," whatever you want that to mean. I do like its tattery bat wings, spindly frame and large claws, characteristics we see more often in demon digimon than in angelic knight-like digimon.