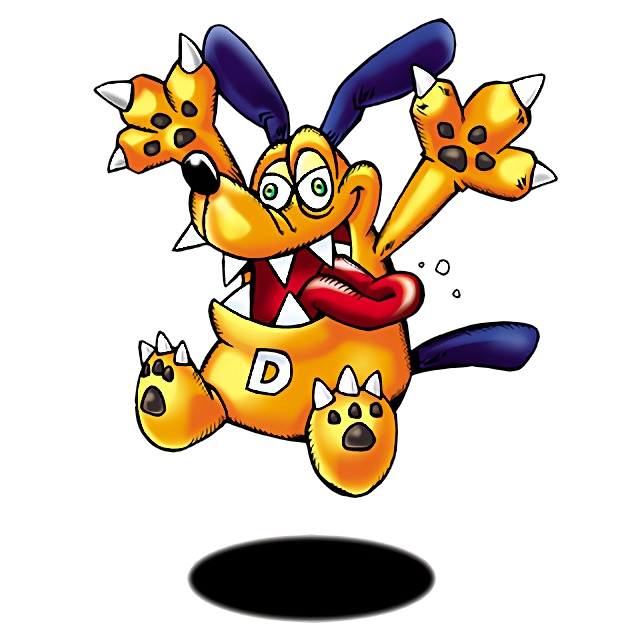 Another product of an art contest, Doggymon is an Adult-level puppet digimon following a similar style to monsters like Chuumon and Gekomon, so naturally, I love it. It was supposedly created from the data of an American cartoon database, and its body can squash and stretch to resist serious injury. It's another highly unusual digimon that SEVERELY warrants an appropriately themed Perfect and Ultimate stage, but unfortunately, is only thus far known to evolve into two possible digimon; either Cerberumon or Metal Greymon. Of the two, only Cerberumon is even a dog, and a dog we're going to be reviewing a bit later. It doesn't even get to evolve into Weregarurumon or any of the other existing canines? Or any of the higher-level cartoon puppets? Sheesh.

You might also expect this to be one of those "garbage" digimon, but I'm not sure it's even gotten that distinctive of a role. On the plus side, it can evolve from the similarly styled Chuumon. From a mouse to a dog? I guess they're both pretty basic cartoon animals, which means there really oughta be some fat, toony cat monster for Doggymon to evolve into, and from there, I don't know...a creepy Etemon-like rabbit? The only attention Doggymon's ever gotten at all was in a single episode of Digimon Frontier, but at least it was a fun gag. He served as the sidekick to a conniving, cheating Black Weregarurumon participating in a race, and the two were basically direct expies of Dick Dastardly and Muttley from Hanna Barbera's Wacky Races!

Aesthetically, Doggymon is also a good lead-in to tomorrow's digimon, and for multiple reasons, I really think it should be one of its evolutionary options.