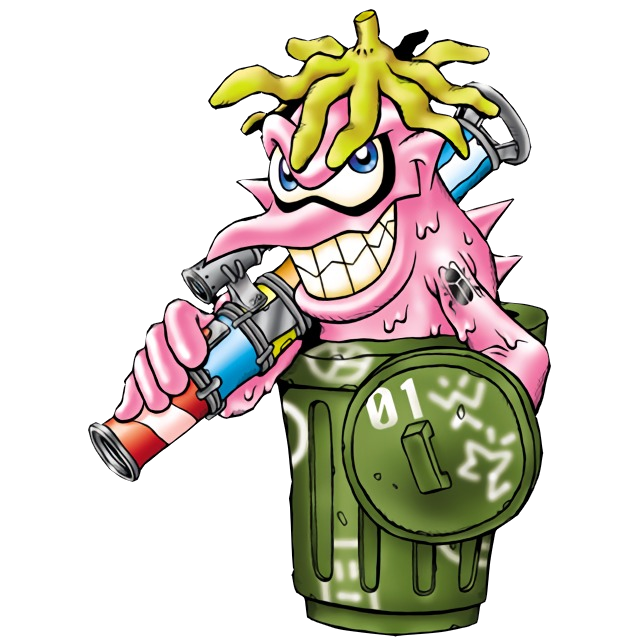 We're almost to our 100th review, and I almost gave that honor to this very digimon, but since we've hit Adventure 02, I think there's a couple of someone's who deserve that recognition just a little bit more, even if Garbagemon here IS supposed to be the supreme and most powerful evolution of all my beloved "garbage" digimon. This is what its profile claims, anyway, despite the fact that it was only Perfect level, and the "Ultimate" stage had already existed for a while when Garbagemon debuted. I guess they didn't think a true Ultimate should be poop themed, but they'd eventually rectify this with PlatinumNumemon.

Naturally, Garbagemon can evolve from absolutely any of the filth-loving Adult stages, in some cases via fusion evolution, such as Roachmon with Numemon. As a concept, it's not quite as strange as some of these digimon, basically just some sort of gremlin in a garbage can, but as with so many of the "failure" evolutions, its design is really brought to life by its distinct stylization. You can't not love the nasty teeth, pointed snout, jagged facial contours and fused, black-rimmed eyes, looking like some screwy mashup between a Sonic the Hedgehog character and one of Rat Fink's skeevy friends. Drippy details also let us know that Garbagemon is either largely composed of or completely covered in the signature bright pink Digimon feces, which is of course the primary ammunition it launches from its recycled can bazooka. The kickass cockroach tattoo shows off its devotion to the trash gremlin lifestyle, a banana peel gives it an adorably thematic moppy "hairstyle" and its trash can has even been vandalized with spraypaint for good measure. All in all, one seriously punkass little crapdemon, and a worthy Perfect stage for any of its fellow lower-level crapdemons...though none so worthy as one, or rather two in particular: I have never seen anyone else ever call attention to this, but Garbagemon's entire design is a clear middle ground between Chuumon and Sukamon, and though there are no "canon" instances of the two fusing together, we must remember that Chuumon was once exclusively featured as a tiny symbiont riding around on every Sukamon by default. They've been separated as two distinct species in more recent Digimon games, but back in the day, any Sukamon evolving into a Garbagemon would have been assumed to have its own Chuumon pal at the time, so I'm not technically wrong to consider Garbagemon their fusion. That's where Chuumon disappears to! The two sleazy pals become one big asshole together!

Every Digimon was not automatically supposed to reach Ultimate level back in the day, but now it's considered a given, and Ultimate stages for Garbagemon are as lacking as usual. Platinum Numemon is the most appropriate option, though Puppetmon could evolve from it in their very first V-pet appearance, and even employs a bunch of Garbagemon as minions in the anime. I guess that's thematic, if you think of Puppetmon like a "discarded toy."

The most entertaining choice, however? Garbagemon can evolve into Rosemon in not one, but two different virtual pets, and on one level, you have the poetic irony of a delinquent turd-goblin evolving into an anime heroine with big bazongulas, but on another level, it makes simple logical sense anyway. It's a "beautiful rose" sprouting from "fertilizer," or life from decay, a basic fact of nature and a classic allegory throughout popular culture for the hidden potential that supposedly hides in us all.

Obviously I prefer when we can just accept weirdos and misfits for what they are, but I still appreciate the twist that a series of verminous dookie gremlins can end on not only one of the most powerful of all Digimon, but a Digimon they've pushed so hard as fanservice fuel.

I think Garbagemon would want it that way. Go back up and look at any given Garbagemon's sleazy grin. Garbagemon knows exactly the giant middle finger it's about to spring on everyone who ever looked down their nose at it. It cannot wait to shake its booty while it throttles some chump with its thorn whip.