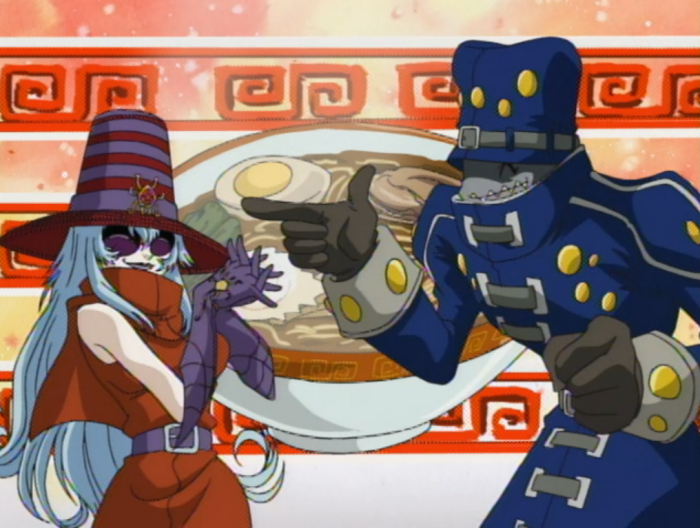 BEHOLD, two of Digimon's all-time biggest cutie-butts and the two most redeeming things about Adventure 02, even if these Perfect-level foes don't even show up until halfway through the series. Once that happens, however, they fulfill a much needed and probably intentional Team Rocket sort of role, albeit with a far less healthy friendship than Jessie and James, which we'll explain in a moment, but first, to review them both as digimon concepts! Arukenimon is introduced to us in her "human" form, which isn't something a digimon is normally supposed to have, or even something an Arukenimon normally has in other continuities. There's a reason for this that we'll also get to later.

As a "human," Arukenimon is a big cutie with great fashion sense that subtly communicates her spider theme without the more typical Black Widow motif or any obvious extra appendages. In this form, she can play a flute that puts all insect-type digimon under her control, and use her silver hairs to transform "dark towers" (long story) into evil digimon. Arukenimon's true self, as you can see, is an even bigger cutie with even greater fashion sense, an demonic spider queen with a huge, fuzzy abdomen and the kind of weird, lanky proportions I was beginning to really miss from humanoid digimon. She's probably one of the only digimon to date with this much of a human woman aspect who still looks to any degree like a deranged monster, and for once, it's actually played up and improved upon in the anime version. Just look at that face. How frequently does ANY "female" anime character ever get a mug that twisted? Why does the entire industry seem to believe that everbody everywhere would rather see some whimpering, baby-faced, perfectly groomed wife-oo, as the kids say these days, to one with snarly teeth, ghoulish eyes and giant arms? Who honestly prefers that? You take that rubbish and you KEEP ON MOVIN' ON OUTTA HERE with that, BUB!!!! Arukenimon's abilities in this form include the razor-sharp "spider thread" she can release from her hands, a corrosive green "acid mist" from her mouth, and the ability to "release countless Dokugumon from her abdomen." This last ability is never actually seen in the anime, which is probably fortunate for all but the weirdest viewers. I mean, Dokugumon is consistently portrayed much bigger than Arukenimon. I know they're digital creatures anyway, but that still can't look all that pleasant.

Dokugumon, it should go without saying, is the default Adult digimon that evolves into this one, at least in games where Arukenimon is featured as a normal, "natural" digimon. She can also evolve further into something really great and visually thematic, but still unique and special enough that we're reserving it for a dedicated review of its own. Next, we've got Mummymon, who doesn't seem to grasp the meaning of "human disguise" quite as well as his partner in crime. He doesn't really scream "mummy," either, but that's fine. I always appreciated that he isn't just missing his right eye, but has no socket or scar or any indication that it was ever there, or any other facial features besides his saw-toothed mouth. In this form, he never exhibits any powers or abilities...but he does know how to drive and owns a little car. That has to count for something. In monster form, this guy is everything you could have expected from a digimon mummy. He has an overall very Devimon-like shape, with huge claws, excessive leather belts and over the top weaponry, but with the same charming face he always did. His abilities in this form include "snake bandage," which employs his wrappings like tentacles, and "Necrophobia," an attack sometimes described as "summoning evil spirits," but sometimes described (and almost always illustrated) as an energy blast from his giant gun. It's a hilariously dramatic way to say you're just shooting somebody, and better still, the gun itself is named "Obelisk." What's unusual about Mummymon, and I've said this in at least two other articles, is that his design is only about 1% "Egyptian mummy," courtesy the striped crooks on his back. Otherwise, his inventory includes not just white bandages, but a purple bandana, leg braces, bandoliers, and a rifle that is also a giant crutch. Meanwhile, his "human" form wears a stylized captain's uniform emblazoned with gold badges, and walks with a cane.

Mummymon's motif is that of a heavily wounded military soldier, and that's actually not all that surprising for a "mummy" in a Japanese cartoon. As someone more observant of Halloween monsters than is usually considered reasonable, I can tell you that a lot of mummies in anime, manga and Japanese video games display a more "medical" than "ancient egypt" motif, or don't even make a distinction between the two at all. It's a strange little cultural distortion I've always found interesting, and I have to say I kind of like the "hospital mummy" idea even better than the "haunted pharaoh" version. Speaking of, though, there's still an Ultimate-level "Pharaohmon" for Mummymon to evolve into, but it's so much less interesting that I'm just going to say I'd be giving it a two or a three if I bothered to review it independently. Ghoulmon or "Deathmon" is the far more interesting option, canon in Digimon Story, and may not have anything to do with mummies, but it at least carries over Mummymon's single, golden eye and grey skin. By the way, look at these friggin Bandai Finger Puppets. WHY DON'T I HAVE THESE!?

Anyway, we mentioned earlier that Mummymon and Arukenimon don't exactly have a psychologically positive partnership, and here's a fan-dubbing of a scene that was partially cut from most translations.

Like any reasonable person of sophisticated taste, Mummymon is wildly hot for some arachnoid demoness action, but Arukenimon has no interest in anything other than their convoluted mission and returns the moldy corpse's creepery with frankly well-deserved physical abuse. It's not a good or even really "okay" relationship for any two people to be in, and anime has a pretty bad habit of portraying it as innocent comic relief, but it's a little different when it's coming from unambiguously villainous characters. Hell-bent on murdering children and already having murdered innumerable digimon, these two really kind of deserve each other, but their screwed up interactions feel more sympathetic when we find out that they really, really didn't have a choice. Arukenimon and Mummymon, as we learn in some of the final episodes, were created artificially by a miserably lonely scientist, Yukio Oikawa, who discovered the digital world many years before the first series but missed out on ever physically traveling to it. There's more to his story and it's pretty damn sad, but all you need to know is that he'll do anything to open a gateway between the two worlds.

To this end, he somehow figures out how to splice data from the digimon world with his own DNA to create personal digimon agents, and these two creeps are the result. Whether or not this makes them technically "siblings" is never addressed, but I'm going to say that it's irrelevant because they're still just digimon, their genetic human element only allowing them to shift back and forth from their humanoid to more monstrous forms.

Though the series does little more to flesh out their personalities, we're explicitly told that Arukenimon and Mummymon manifest the "darkness" in Oikawa's soul, making them naturally predisposed to violence and cruelty through no choice of their own. It's difficult to blame a villain who literally cannot help being a villain, or even fault Mummymon's Nice Guy skeeviness at that point; he was MADE out of somebody else's most messed-up, selfish emotions. Neither Mummymon nor Arukenimon understand anything other than acting on impulse, they provide one another with the only companionship either one has ever known, and they don't even have a normal digimon's level of life experience, having been "born" directly into their current forms a few short years before this series begins.

Had these two been characters in the original Digimon Adventure, I've never had any doubt that we would have gotten to know a little more about their feelings, and that they may have even gotten a little more of a redemption story.

Instead, the tragic tale of a lascivious dead guy and the sadistic spider who just barely tolerates him is cut all too brutally short by the true villain, Malomyotismon or BalialVamdemon, all so the audience knows for sure how super duper evil and strawng this ridiculous-looking asshole was supposed to be.

Jesus, this is actually sadder and meaner than I remember, and the worst part is it never even matters. This situation should have at least helped turn the tables of the final battle to some small degree. I don't even remember how old I was when I saw this episode on Fox Kids for the first time. I was probably a teenager. It was probably too old by most regular people's standards for a kid's show to leave me with a bleak, hollow emotional sensation for a whole weekend, but boy it sure did do that.

Instead of dwelling on this anticlimactic ugliness, I say we remember the good times. The good times Arukenimon and Mummymon remember.