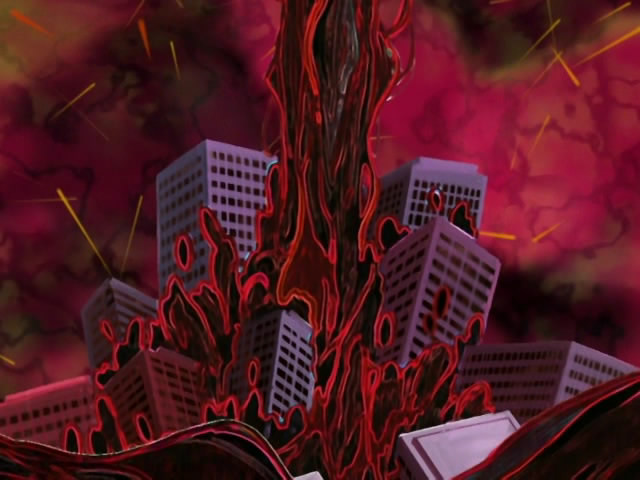 So it's time we dive right into the bizarre final villain of Tamers - another digital entity that isn't actually considered a digimon itself. The D-Reaper was originally a computer program intended to prevent other programs from "exceeding their intended parameters," and manifested in the digital world as a force of raw chaos and death, devouring any digimon that became too advanced.

Unfortunately, just as digimon soon gain the power to manifest outside the digital realm, so does the D-Reaper, turning its attention to the real world and testing the limitations of the human species as it begins to digest a significant portion of Tokyo.

The inspiration for the D-Reaper is usually said to be the real life "reaper" program created back in the 70's to counter a computer virus called The Creeper, but it actually has much more in common with the "reaper" from the Tierra project by ecologist Thomas S. Ray, an actual experiment in creating "digital life forms," or lines of code that mutate, compete and evolve. Tierra's reaper had the same exact purpose described in Digimon Tamers - to exterminate digital "organisms" that evolved beyond the capacity of the system they inhabited.

The idea of this "reaper" breaking out into the real world and applying its directive to us is an amazing concept for a Digimon villain, much more thematic to the setting than just another world-eating digital demon or space alien.

In its rawest form, the reaper resembles nothing but red slime and red cables; very ominous and very cool, but that's only the beginning...we're going to be looking at the D-Reaper's weirdos for at least the next ten days!