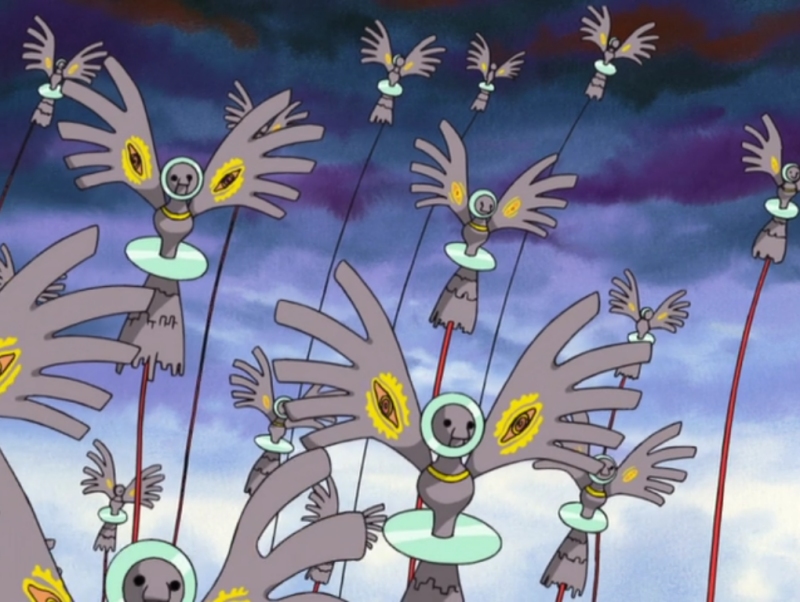 The D-Reaper boasts a remarkable variety of "agents" it uses to explore its surroundings, defend itself, and carry out its directive to exterminate, and we begin with ADR-02 because it's actually the first one we're properly introduced to.

As their codename implies, the Searchers are intelligence gatherers, and in fact have no ability to fight at all. Like all of the agents, they can only function outside of the Reaper's gooey red domain as long as they're attached to it by long, creepy red cables, effectively making them mere "appendages" of a greater entity. The concept is already satisfyingly alien, but the agents are really designed to look like something from another, artificial world, and ADR-02 exemplify that pretty well with their roughly hand-shaped wings, stoic faces, glowing eye spots (seemingly their true "eyes!"), CD-like frills and "pixelated" skirts. Series writer Chiaka J. Konaka wanted the Reaper and its various forms to be something special, so he tasked three big names in the series to come up with them including original lead digimon designer Kenji Watanabe, human character designer Katsuyoshi Nakatsuru, and Shinji Aramaki, credited as a "CG designer, mechanic and character designer."