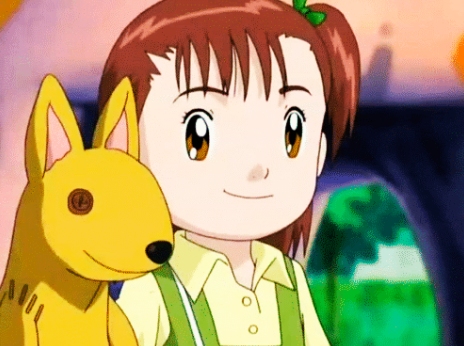 So it's at this point in the series that we're fully introduced to the "first" ADR type, but before we really get into it, we have to back up for a second, and we've got SPOILERS to be wary of in case you were going to watch this series for the first time.

This kid with the hand puppet is Jeri Katou, the youngest of the main characters at ten years old and fairly small even for her age. Originally the most upbeat of the whole cast, she loved entertaining people with her puppet, cheering on her friends with encouraging words and generally being a ray of positivity. ...Unfortunately, Jeri's digimon partner is Leomon, and in case you missed our Leomon review, this guy is most famous in the fandom for the fact that he has died at least once in every single series to have ever featured him. This instance is particularly brutal, since this innocent little kid starts off a fan of the fictionalized version of Digimon, finds out that digital monsters are REALLY REAL, pursues a friendship with her personal favorite monster, and has to watch him murdered by a mindlessly enraged Beelzemon.

Jeri's cheerful outlook on life takes an abrupt plunge, and this mentally vulnerable child becomes the perfect vessel for the D-Reaper to begin entering the real world. It eventually turns out that "Jeri" was completely replaced at some point by the first D-Reaper agent, an intelligent humanoid shapeshifter able to operate without a cable connection to the Reaper itself, which now imprisons the original Jeri and continues to feed off her mind. As a design, Jeri Type is the most human-like of all the agents and not particularly "creative," but certainly has more personality and character as a villain, and can even shift to a still more digital-looking face as it moves farther away from a human disguise. Not bad! ADR-01 isn't the only distortion of Jeri generated by the Reaper, either...