It's good old Guilmon! Except...very slightly different? A little sleeker, smoother and less awkward I guess, but the awkwardness of Guilmon was his whole original charm, like a weird cross between a baby lizard and overly muscular dog. I feel like this is kind of a waste of an X-evolution, but I still respect the notion that they allowed new artists to redesign old digimon however they wanted, whether it was just a subtle tweaking like this or something quite drastic.

Again, the biggest difference here is that this is much more streamlined than the original digimon, losing some nice beastliness in the process. On the other hand, it tones down the black markings in a way I think looks much, much more tasteful, and I actually love those new, spiny ear things in addition to the horns. I think overall...I actually do like this a little bit more than regular Growmon. 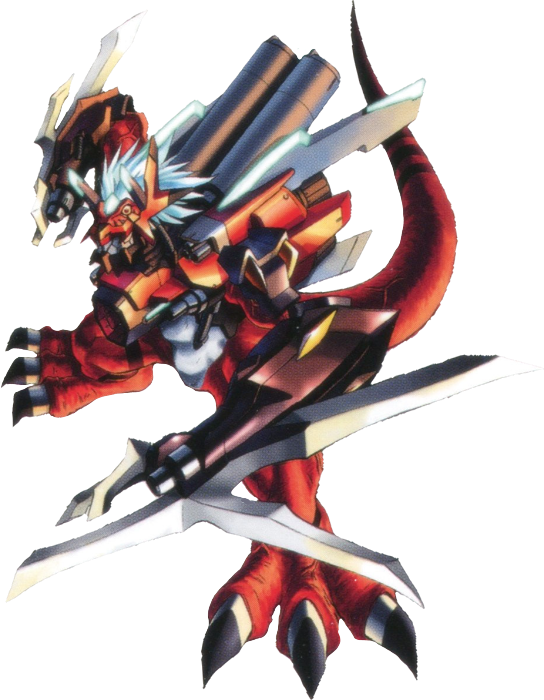 Eh. Another X-evolution that gives a cyborg digimon more gundam-like detailing. Fine for fans of that, and I did just praise the outcome for Metalgarurumon and Wargreymon, but in this case, I think the original flavor had some better ideas. Nameley the large, crescent-shaped blades, which I feel are a definitive aspect of the design.

Still, this is "alright" on its own. Reminder again that I go by the reasonable, correct human logic that a 3 out of 5 is a "good" rating, rather than the godless nonsense gamer logic that anything short of a 99% is "bad."

My original opinions on Dukemon pretty much still stand here; I get the appeal of a dragon thing turning into a knight thing, but a knight thing still can't be as interesting as a dragon thing was. The X-antibody changes don't really do anything new or clever, either. This whole line really is just the same thing it used to be in a very slightly different aesthetic.

Dukemon X can also transform into "Medieval Dukemon," which is just a more streamlined knight guy. I also can't find its artwork in the art books I've been getting our nicer, bigger images from, so you get the ugly scaled up version of the low-rez art that circulates the internet.

Finally, we have the X-antibody mutation of Guilmon's "corrupted" or "evil" ultimate stage, which of course still gets some extra points for that entire concept alone. I think I still prefer the more digimonesque style of its original version and I miss the radiation symbols it used to have, but the X version is admittedly pretty rad. It's much spikier and nastier, its proportions make it look bigger, its skin now has a lava-like texture and it now has little fleshy naked demon bird wings that spew fire to represent the rest of the wing membranes. That's a cool aesthetic! Altogether, I can't argue that this has a much more epic and grand feel than the original Megidramon.