So, let me start off this page by letting you all know that perfectionism finally got to me, and I just did a bunch of shuffling to fit in some digimon I'd missed. I was hell-bent on making sure every tenth review would be one of my "favorites," but I also wanted to review all the original X-forms in one row together, and my attempts to pull that off made a bit of a mess of some things.

This means that Cerberumon X has now been folded into Dobermon X's review, Anomalocarimon X has been combined with Crabmon X, Review #225 has become Dynasmon X, review #227 has become Otamamon X, I've added Chaosdramon X to Agumon X, and while I was at it, I finally remembered to add the original Chaosdramon to the original Agumon review and the original Dynasmon to the original Hawkmon review. DO YOU SEE WHAT THESE DAMN DIGIMANS DO TO ME?!
...But, at long last, we are done with the original release of X-antibody digimon and our 230th review really gets to be one of my beloved "failure" digimon, possibly even the LAST true example of the "failures" and originally introduced in the third X-antibody virtual pet!

The bad news is that this one has nothing to do with slime or sewage or garbage, but you should already be in love with what you're seeing here, regardless; a blank, featureless white being resembling a lego figure, but with a scribbled-on face and taped-on, cardboard armor. Look closely at the pieces on its arms, too; those are pale imitations of Omegamon's limbs, if you hadn't already guessed a connection from the name!

The idea behind this digimon is that it was born from an unfinished "design drawing" in a digital art program, used data from that program to create its colorful pen weapon and proceeded to decorate itself in the likeness of a stronger, more popular digimon. Sorry, don't know what the heck all that was about. What I meant to say was, I never cared much for Omegamon before, but I love this Omegamon because this is the finest, greatest and most real Omegamon I have ever seen. It is doing such a supreme job of being Omegamon, that any other Omegamon looks like a complete fool in comparison, and could only ever dare dream of being half the Omegamon now gracing our presence in this, my review of only the most correct Omegamon among all possible Omegamons. 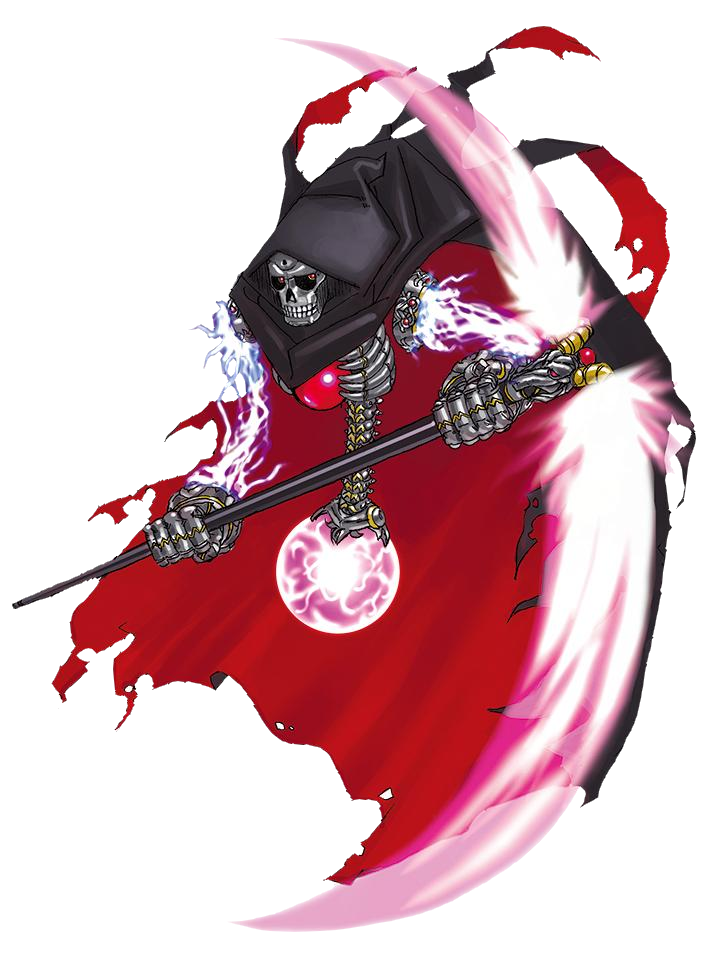 And speaking of shuffling things around, I originally covered THIS one alllll the way back in review #013 as an evolution of, well, Phantomon, but while that's what makes more obvious sense, it's a lot more interesting that this digimon was first introduced as an exclusive evolution of Omekamon. In other words, this huge, horrific metal reaper with plasma arms and a goat-headed energy scythe was designed to be the Monzaemon to Omekamon's Numemon, the ultra-powerful Perfect stage you're rewarded with when you refuse to give up on your broken "garbage" digimon awesome and flawless Omegamon. Metalphantomon has, unfortunately, never really returned for any of the digimon video games... but it did get to appear in an episode of one of the more recent anime series, and as one of those villains with power over dreams and nightmares! The digital world's Freddy Kreuger!

I'm still not entirely sure why Omekamon evolves into this thing, exactly, but it's actually about to get even weirder than that. 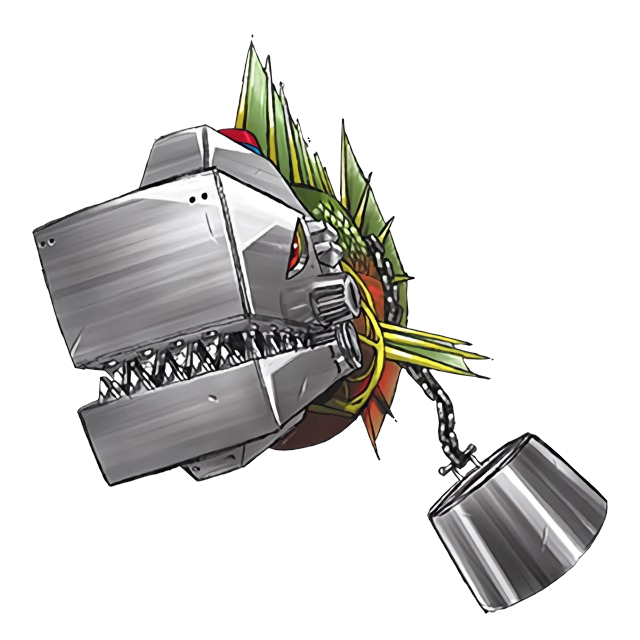 There really is no rhyme or reason to this sequence, is there? Yes, the evolution originally introduced for Metalphantomon and the final outcome of a well-raised Omekamon is a piranha with huge, prosthetic metal jaws, and hilariously, a "counterweight" chained to its tail so those jaws don't force it to swim face-down. Really, that's the actual explanation for that thing. That is adorable, especially given that Metalpiranimon is apparently barely larger than a real piranha. The more I think about this, the more I love it. This is an animal with a sensationalized reputation for being much more dangerous than its size implies, so of course it gets a Mamemon-style mini-sized digimon of extraordinary fighting power, and of course the way they illustrate that is a piranha whose infamous teeth have been given digimon-style cybernetic enhancement. A tough little fishy that has gone the Metalgreymon route! This is a concept and design taking full advantage of the setting's internal logic as they would apply to a real animal, and it makes for one of the most novel and memorable Ultimates in the series.