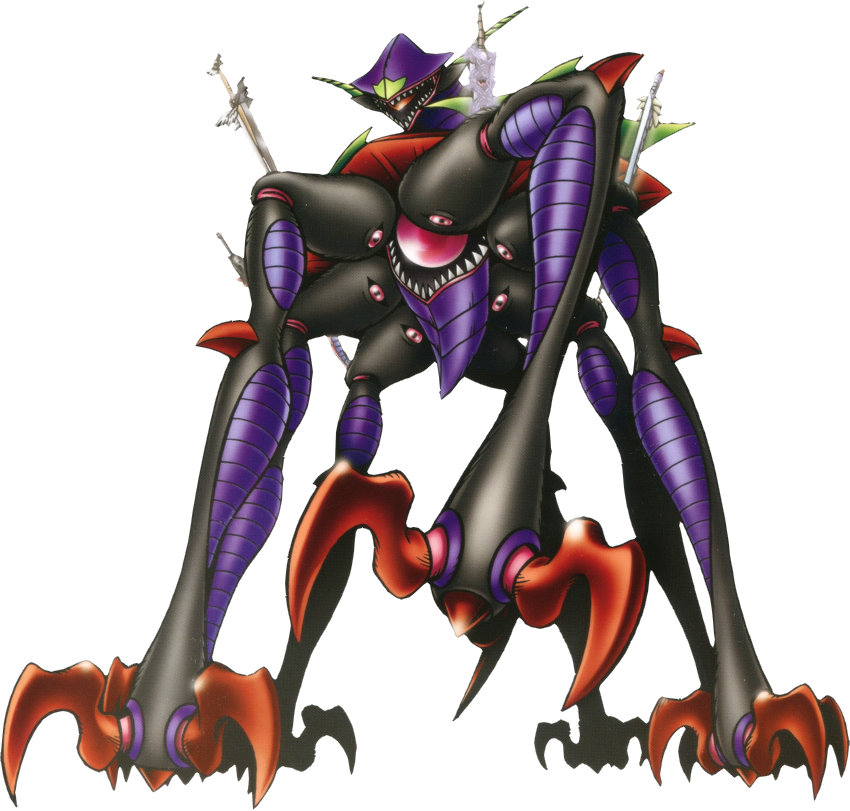 SUPERBLY dreadful! You can tell just by looking that Ogudomon is sort of a really big deal, and it is in fact the digimon fusion form of all seven demon lords, so that's Lucemon, Leviamon, Daemon, Belphemon, Barbamon, Beelzebumon and Lilithmon, or Pride, Envy, Wrath, Sloth, Greed, Gluttony and Lust. The almost spider-like beast even has seven legs to match, each pierced by a unique sword with a motif matching one of the constituent demons.

It's a shame there's no artwork showing what all seven of those swords look like, but from here, I can just make out a Lucemon sword with both angel and devil wings for the hilt, a Belphemon sword wrapped in chains, and what may be a Daemon sword with fangs or claws on it. Each is also usually orbited by a glowing sigil, but those had to be sacrificed to make this into a transparent image.

It's hard to pick a favorite between Ogudomon's two faces. The upper, slightly insectile head appears to be either eyeless or sees through what may be a red "visor" in its mouth, while the seven eyes surrounding its lower maw offer a more ghoulish, mournful gaze. I guess it's not a matter of which one you like "better," because it would only be half the design if you dropped either one.

Too bad there isn't really anything more we can say about such an important Digimon; it's just the kind of huge, weird beast you would expect from a fusion of all seven deadly sins. Does Digimon have enough world-ending supermonsters yet? Is that enough Cthulhus and Gozers for you, Digimon?