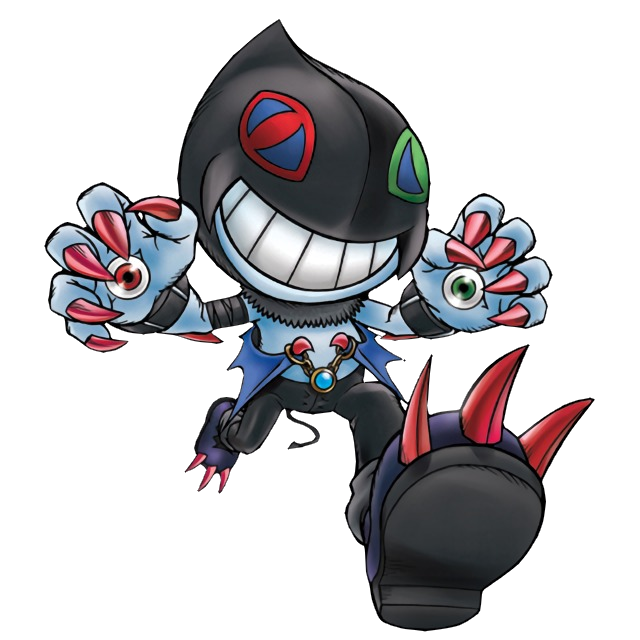 We're still not done with demons and devils! Introduced not long after our last few digimon, Dracmon or "Dracumon" is, as its name implies, intended to be a vampire-themed child stage, except it doesn't necessarily evolve into the vampire digimon we've already seen, and its design is quite far from some generic, fanged bat-demon or gothic cadaver. Dracmon is instead a totally rad little gremlin with a Cheshire Cat smile, a blind head or mask with only painted-on eyes, and eerie eyeballs right in the palms of its hands! Westerners associate this with the Pale Man from Pan's Labyrinth, which came many years later, but it's also the definitive characteristic of the Japanese yokai, Tenome.

Obviously that doesn't have anything to do with the "vampire" theme, but there's no reason a vampiric monster can't have freaky eye-hands, is there? This is one of those digimon that puts such an original twist on its underlying concept that it really feels like something special and iconic to the series, though it wouldn't get a major anime role until a bit later.

According to its profile, Dracmon is a rude little prankster who even attempted to graffiti the faces of the four Holy Beast digimon, and is so devoted to just running around and causing harmless mischief that it "forgets" to suck blood. Careful, Dracmon! You've gotta take better care of yourself than that!! 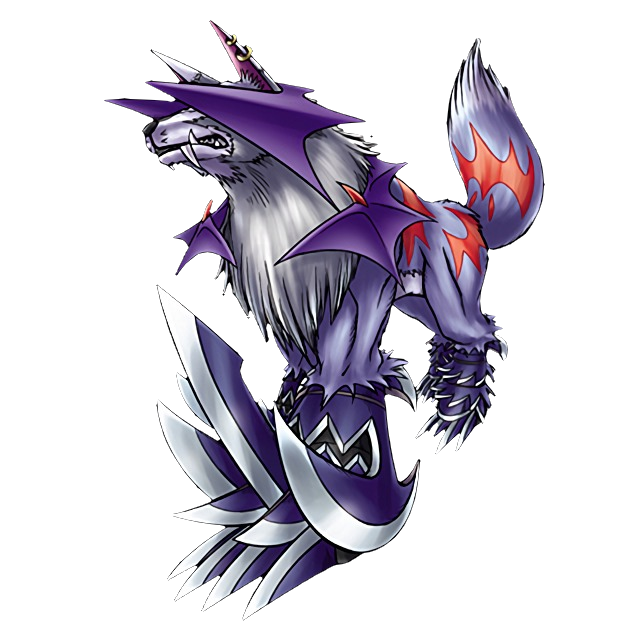 You might think that a vampire wolf for an adult stage is too far a deviation from Dracmon and the kind of decision I'd typically disagree with, but transforming into a wolf was, in fact, one of the major powers associated with Romanian vampires - even moreso than any relationship to bats - and it's nice to see it acknowledged in a cultural environment that otherwise keeps vampires and lycanthropes in strictly distinct categories.

Sangloupmon is said to be a "noble" digimon, a classier kind of vampire than the rotten little punk it used to be, and drains victims until their very digicores die. The design is a bit gaudy around the feet, but I do think the bat wings covering the eyes are a cool touch.

We reviewed Yasyamon before as one of V-mon's armor evolutions, but I thought we should acknowledge the fact that the Xros Wars anime series decided to make it Dracmon's signature evolution, and gave it a pretty fascinating evolutionary sequence! Dracmon shoves its own eyes into its face, becomes the plush doll that Yasyamon carries, and the rest of Yasyamon forms out of the empty mask. That kicks ass! And it's genuinely cool that some totally unexpected evolutions were given credit and even their own unique logic by this later series. Yasyamon never even made as much sense for V-mon as it now does for Dracmon. 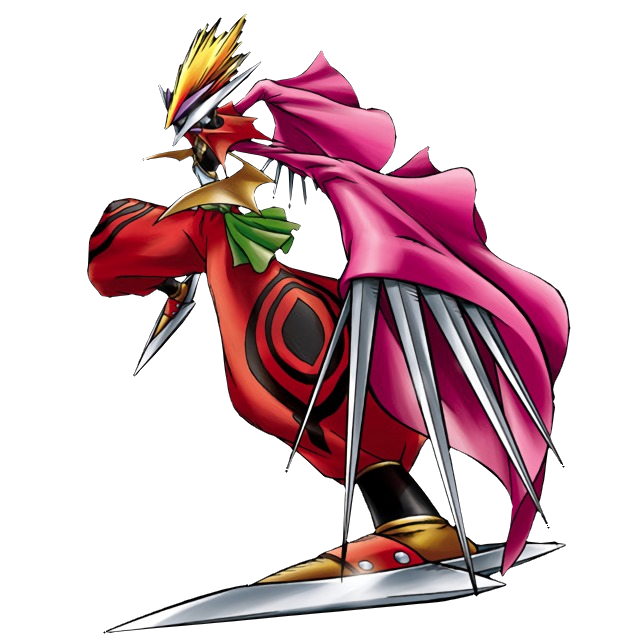 Wow, so...what? What the heck is this thing even supposed to be?! Well, it's apparently still an undead vampire that drains blood, but it's also a colorful dancer and "martial artist" who mesmerizes victims with its whirling dance and flowing garments before skewering them on the multiple rapiers it has for claws.

I can only barely see how they got all this from the idea of a vampiric "matador," a combination already totally off the wall before they distorted it into a completely unique, original and very, very strange monster. A monster whose face, by the way, looks like this on closeup: I assumed this digimon was still supposed to be completely eyeless, but...are those purple things eyes? I don't even know how to feel about that. It's basically got a big metal arrow for a head with delinquent sunglasses and chicken hair. This is one of the best vampires I have ever seen in my life. 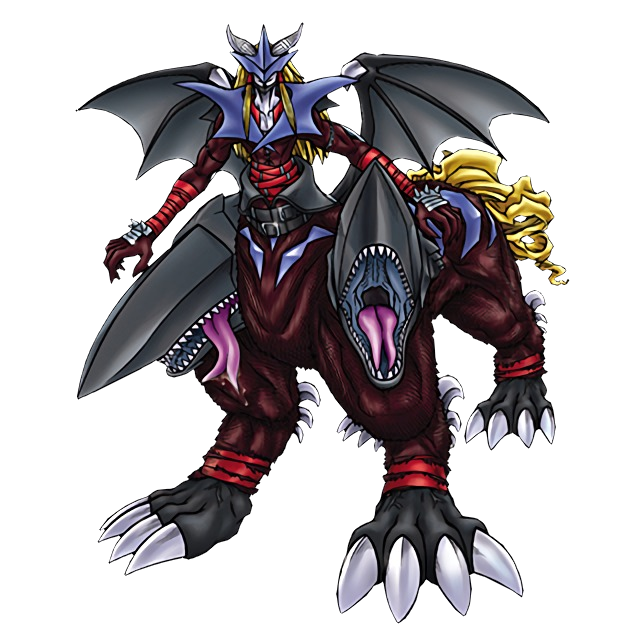 While Dracmon and Matadormon are my favorites of this line, I feel that the final stage lives up to expectations fairly well. The pretty-boy human elements are to be expected from an Ultimate vampire digimon, but it's another design with no obvious eyes, and from the waist down we get a grisly demon beast with a pair of blind, shark-like heads that I think single-handedly (two-headedly?) save the design from what would otherwise be kind of forgettable.

This freaky three-headed giant is the digimon world's "vampire king," so apparently ranking even higher than Vamdemon/Myotismon or Venomvamdemon, ruling an army of demons and undead from his own spooky castle. His official bio states that he knows the true secret of Death-X evolution and therefore Death-X mon, but few have survived their quest to retrieve that information.

The bio also states that Grand Dracmon is so gentlemanly and his charm effects so powerful, the angel digimon sent to kill him have all been seduced over to his side and become his loyal fallen angel minions. We're obviously running a family website here so I won't make any kind of remark on that about how talented he must be with his giant monster tongues, I promise!