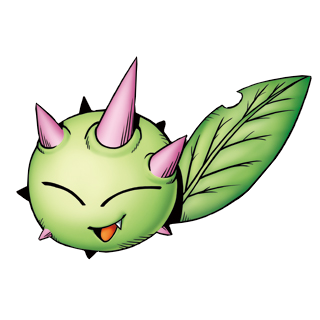 If you haven't noticed yet, a lot of the main digimon this season are just parallels to the original Adventure heroes. Agumon returns as himself, Gaomon is the new "wolf," Falcomon fills the bird role, and now we've got a plant line that, as you'll see, closely follows the logic of Palmon as it evolves...though certainly not in a bad way. First, we just have this prickly little baby stage, which is supposed to be the very beginnings of a flower bud, protected by venomous thorns. 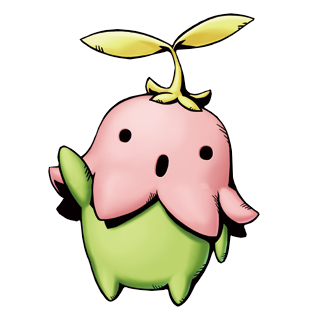 So, the child stage is a more developed flower bud, and while she's not nearly as cool looking as her spiritual predecessor Palmon, this is a design I can back 100%. There is virtually nothing cuter than a face consisting entirely of two to three black dots, the look that most immediately reminds me of a Shyguy or one of Miyazaki's Kodama, and I really like the way the upside-down bud forms a "head" that's also kind of a "hairdo" with a little nubby green body. The thing on her head, by the way, functions as a propeller that allows her to fly. That's weird! I guess the idea is that she's like the flower blossoms that break off and drift through the air, though that usually happens after they bloom, not just when they're budding! 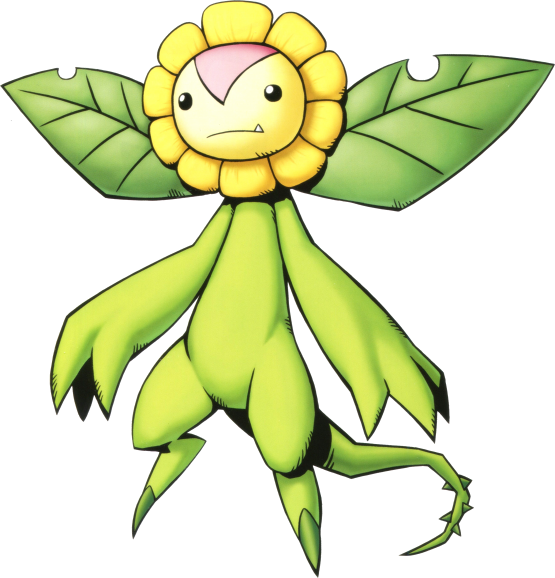 Palmon's evolution into the cactus, Togemon, never made a whole lot of thematic or aesthetic sense besides them both being "plants," so it's nice that a child-stage flower bud actually evolves into an adult-stage flower monster. At first, however, I didn't care at all for this design, and back when she debuted I just thought she was a more boring, lazy concept than previous plant digimon, which was absolutely wrong, because this is what Sunflowmon looks like when she opens her mouth: 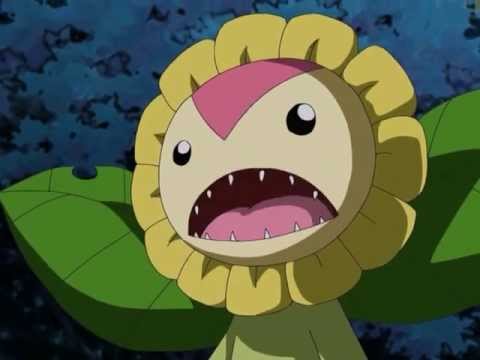 Can you believe what a difference such a simple little detail can make!? Judging by the official art alone, Sunflowmon just feels like a bland, humanoid plant with a flower for a head, but as soon as you see all those needly little teeth, you're forced to confront what an unsettling monster this thing really is, and that is wholly intentional, with even its official bio stating that its "eerie smile" is widely feared! 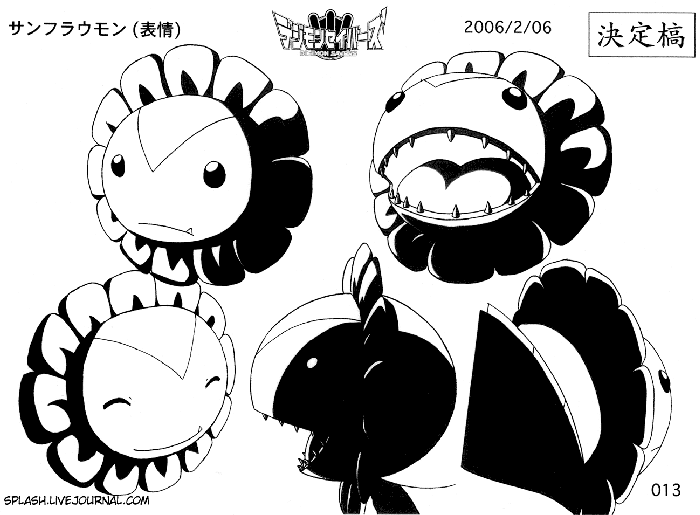 The more I look at Sunflowmon, the more I find to appreciate. It's superficially just a cute, straightforward anthropomorphized flower, but look a little deeper and you've got a weird, botanical lizard creature with creepy-cute doll eyes. I think I actually find this an improvement over Togemon, and I still love Togemon. Check out this slightly newer, even cooler artwork, too: 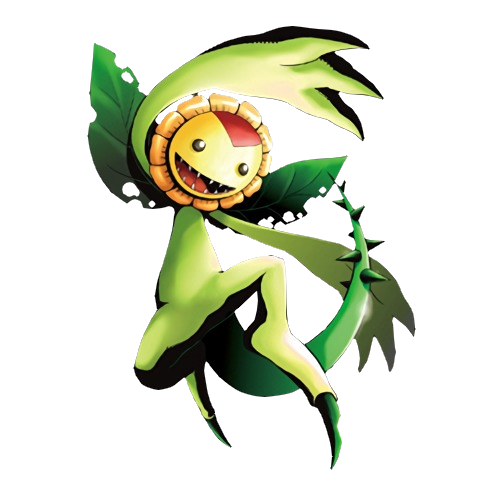 RAD!!! This artist even makes the wings look more bug-chewed than ever! 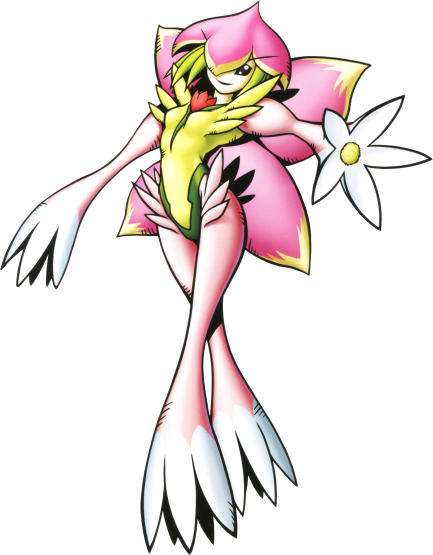 So, just like Togemon, the Perfect stage for this line goes from a botanical beast to a more human-like "flower fairy," and that sort of thing has long lost any novelty it might have ever had in this series...but, damn it, THIS IS HOW IT'S DONE!. I praised Lilymon way back for having such an alien fae folk vibe, and her "Lilac" counterpart REALLY cranks that up. Those weird, petaled hands and feet are really cool, I adore the sharp protrusions flaring out from her chest and thighs, her limbs don't appear to have any recognizable skeletal structure and she just perfectly conveys an only superficially humanlike being formed entirely from rubbery plant matter. Best of all, she's said to be lethally poisonous, "governs over death and rebirth" and attacks by stretching out her weird arms to fire energy beams or "bewitching pollen."

She's also a remarkably clean, streamlined and simple design for a higher-level, humanoid digimon of this era. Even the original Lilymon was a lot messier, with a whole lot more accessories and pieces breaking up the design. Lilamon is a cool concept, a cool design, and artistically pleasing all around! 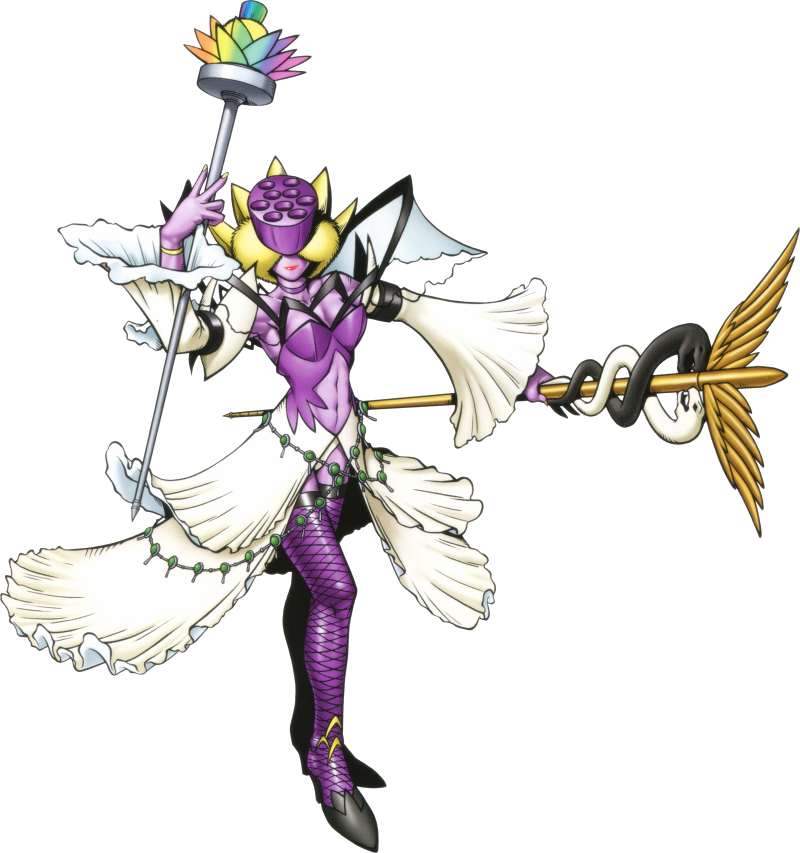 It's a tad disappointing that, in her original anime run, this otherwise brand new digimon line only evolved into Rosemon...but to be fair, Rosemon hadn't had a chance to appear in the original anime series, so a lot of Palmon fans were happy to finally see her. 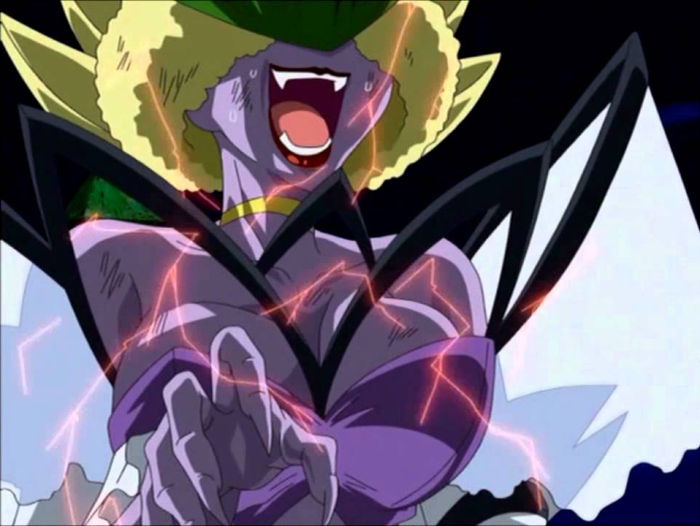 On the plus side, an EVIL Rosemon counterpart appeared in the same series, Biolotusmon, alongside many other "bio" digimon. All of these were simply slight recolors of existing digimon, except for Biolotusmon, because the regular Lotusmon wouldn't debut until the following year in the Digimon Story video games. Confusing!

The true Lotusmon did, however, turn out to evolve from Lilamon, so I think it's safe to say that she's the "true" Rosemon equivalent for the poisonous fairy. Lotusmon's certainly got a lot of the same charms as Rosemon at a glance, but there's something much more ominous about her color scheme, her weapons, her clothes, and oh, I don't know, the way her head is cut off by a giant lotus pod, which I'm sure is making some of you feel itchy and a little queasy to imagine in any more realistic detail than we're seeing here. Imagine! Ahhhhhh.....horrible!

In Buddhism, Lotuses are considered symbols of spiritual for the way they rise up out of the mud, so I guess her actual outfit here is supposed to communicate a clash of "pure and impure" - the clean, white, lacy frills juxtaposed with the goth lingerie. A little gauche, maybe even a smidge condescending, but I just can't get over how damn cool of an effect it is. 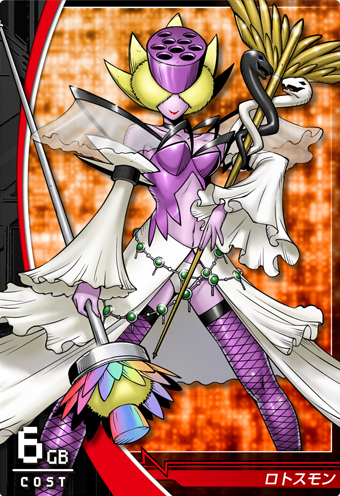 Lotusmon is fabulously freaky - especially in this even more stylized art, like one of those trippier Persona series bosses - with some pretty haunting abilities to match. Her caduceus can emit either a "restorative" or "ruinous" aura as she sees fit, while the psychedelic flower staff emits a rainbow ray which, to paraphrase, "tempts the opponent into a euphoric fantasy world," so yeah, actually, exactly like a Persona boss, or WAIT A MINUTE, actually...doesn't she look exactly like she could have been a Monster of the Week on Sailor Moon!? No wonder I like her so much! She's just the Shoujo Villain counterpart to Rosemon's Shoujo Heroine motif! 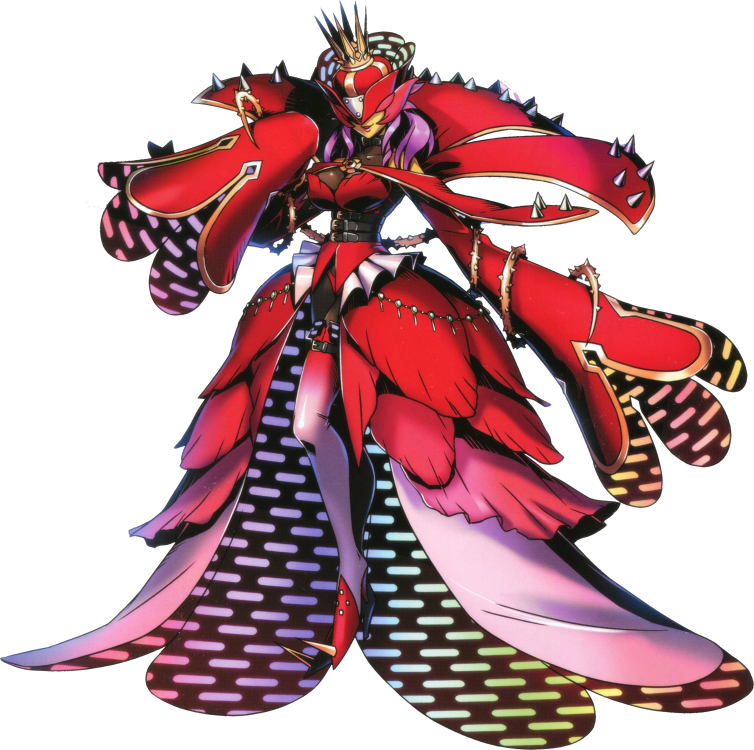 So here's a digimon released only months ago at the time of this writing, brand new for 2018, and it's actually a fusion between both Lotusmon and Rosemon. How fitting is it that the ultimate of ultimate flower-woman digimon would be modeled after the largest single flower known to man, Rafflesia arnoldi!? The parasitic carrion plant is known in Japan as the "king of flowers," so Rafflesimon carries a real "Queen of Hearts" sort of aesthetic, and I really like how the actual flower is communicated primarily by the shape of her sleeves and the mesmerizing interior pattern of her robes.

Just like her inspiration, Rafflesimon is said to emit a stench, not a "fragrance," but a stench that is "out of this world," and also like her inspiration...she can live for only a few days at a time. She's said to live this short existence to its absolute fullest, spending almost all of her time joyously dancing, but she's still not without a dark side, since she also references a Rafflesia's parasitic properties. Fine, powdery scales are constantly shedding from her body as she moves, and these scales, quote, "latch on to opponents, causing them to lose consciousness and become her servants."

Taken as a whole, this digimon line goes through some pretty jarring aesthetic transformations...but thematically, almost every single stage is basically a flower with some sort of monstrous "edge" beneath its cute or elegant surface. It's really a lot more consistent than it might first appear, and probably one of the coolest "hero" digimon lines we've seen in a while...though we actually have some pretty amazing ones to come, too!

As commenters have also pointed out, it's interesting how much better Lalamon fits as a child stage for Togemon and Palmon suits Sunflowmon, the two counterpart lines easily interchanging any of their stages and kind of "completing" each other. Personally, I think it's also important to point out how well Sunflowmon also links Palmon to Blossomon, even if the Digimon Story game sprites are all weirdly out of scale:

It really is too bad that Petaldramon isn't considered an Ultimate stage evolution in any context, or you could have really had an unbroken line of reptilian flower monsters here.