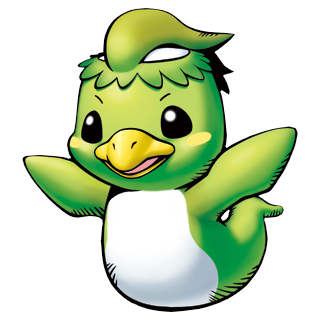 Oh, it's a kappa! Kind of a baby penguin kappa, which is something I'm surprised I've never seen before. Seems like a natural fit to me! This baby stage was introduced in a 2006 virtual pet as the unevolved form of today's line, Kudamon's line, and Falcomon's line since it kind of thematically ties into all three as a mythological bird-turtle monster, but, those lines also have more appropriate babies of their own, so I think Chapmon can rightfully be considered the most official baby stage of our next digimon... 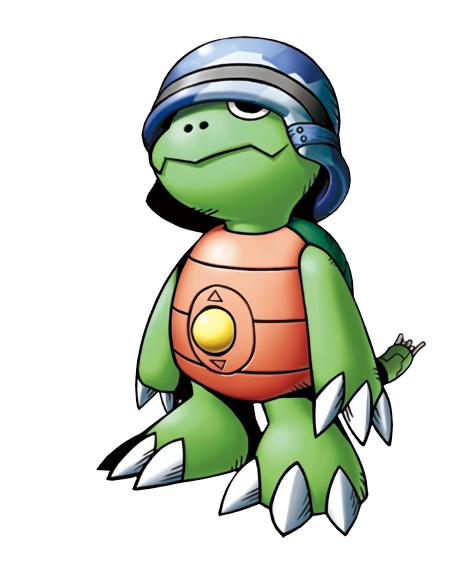 I am definitely still missing the way digimon used to be designed and drawn, but setting aside that I find the art style a little plain, I can't not love a dumpy, bipedal little turtle with a helmet. A helmet that usually just covers his eyes completely, making him look even cuter, and you may also notice the trackball on his underbelly. He's actually themed around an old fashioned computer mouse, and his main attack is a giant cursor he fired like a missile! 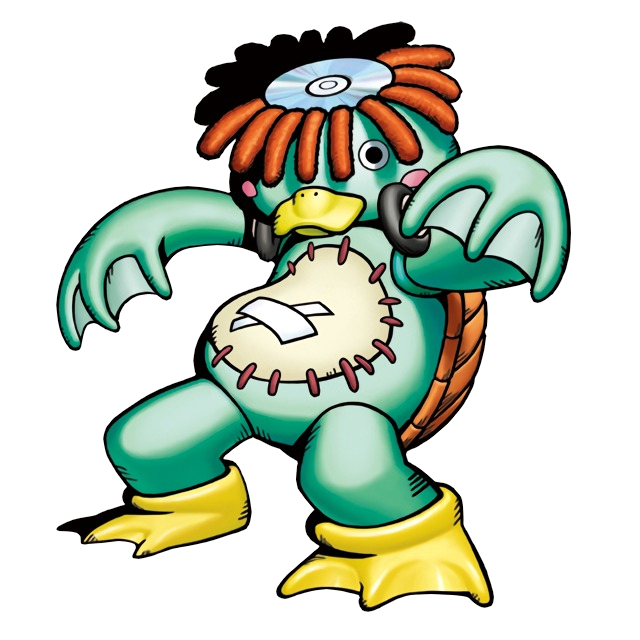 It sure has been a while since we've seen a big, plush puppet-type digimon, hasn't it? It's one category in which digimon never ever go wrong, and this comical, stuffed mascot-costume kappa is a very worthy successor to designs like Monzaemon and Extyrannomon. It has a nice outline, pleasant colors, and the CD for a head-dish is another clever way to give this line a Digital World spin! Gawappamon is specifically into rapping, because that makes it a KAPPA RAPPA, get it?! It's a joke they also used in Yo-Kai Watch, and I'm sure several other series. 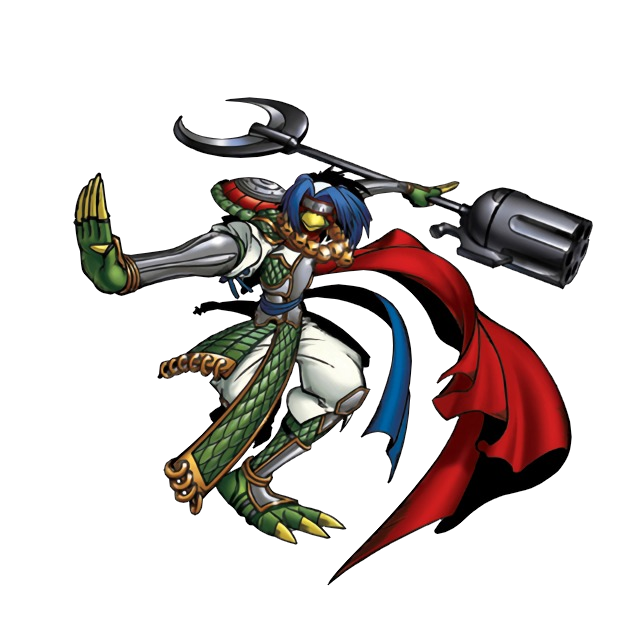 Awww, that's it? Just a badass kappa guy? Go back to the puppet!! Or perhaps just switch the two around, since stuffed animal digimon were traditionally almost always perfect level. I guess Shawujinmon is alright if there did need to be a humanoid kappa guy.

He's described as a digimon "banished from heaven," which may sound harsh, but that's actually kind of the idea behind yokai in general - that they don't really belong to either the world of humans or the various realms of the afterlife, but have strayed from the natural cycles of reincarnation to become something uncanny and wrong. Considering that the digital world has equivalents to heaven and hell, I'm surprised that the idea of yokai-themed digimon in a "limbo state" hasn't really been touched upon before this one's profile. 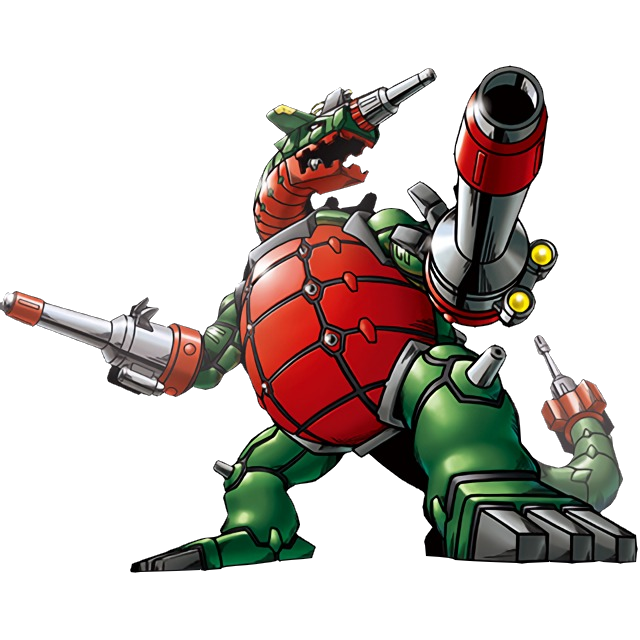 Whoa, whoa, whoa, the Ultimate actually STOPS being a humanoid!? Incredible! It feels like forever since an Ultimate level digimon became a giant, stomping kaiju, and this war-machine turtle beast has an old school monster movie feel that would have been right at home with Digimon's earliest roots. For a mechanical design it looks really nice, especially with the scaly look of the shell, the flexible neck, blocky steam-shovel jaws and cannon nose. Its guns apparently fire streams of water so thin and so powerful that they bore through things as effectively as any energy beam, and are referred to as "hydro lasers." That is inherently not what a laser can be, but it just sounds too damn cool to care about the technicalities of it.

From start to finish, this line maintains a solid theme of turtliness while offering a little bit of everything - the cute animal baby and child stages, a freaky-weird puppet form, a radical anime humanoid and finally a city-smashing dinobeast.